Update: For another version by Walt McDougall of his social encounter with Melville at Matt Morgan's studio, see Walt McDougall in the American Mercury.

Reading Richard Scully on Matthew Somerville Morgan gives me a different idea of why artists and poets including Herman Melville might have visited Morgan's New York studio in the 1870's. Walt McDougall placed his encounter there with Melville in the context of Morgan's fame as cartoonist and co-founder of the London Tomahawk, and McDougall's own youthful semi-employment with American comic weeklies like Puck and Judge. But as Scully makes clear, Morgan just then was already turning, or rather returning, from caricature to theater and scene painting. Update: And duh! I see now that the book version of McDougall's reminiscence names "actors" among the daily crowd at Morgan's studio, along with illustrators and poets. The earlier magazine version had not specified actors or poets, describing the regular visitors as "nearly all of the illustrators and writers of the day."

Various of Morgan's theatrical productions in this period were regarded as scandalous in the usual moralizing quarters--which complaints of course must have been very good for business. The NY Spirit of the Times delighted to entice readers with provocative descriptions of shows at Niblo's. The following notice, printed when Black Crook had just segued into a new revue called The Naiad Queen, mentions all three ladies pictured above in the Black Crook poster by Matt Morgan:


... Mlle. Sassi's performance with the anaconda excites wonder of many kinds and degrees. Miss Kate Santley looks as pretty as she can, and Miss Jennie Lee is pretty, piquant, and a general favorite. Consequences—crowded houses and overflowing tills.
(Spirit of the Times, March 2, 1872; found at Old Fulton NY Post Cards)

I'm guessing Morgan's allegorical paintings and controversial "living art pictures" or tableaux vivant would probably have interested Melville more at that point in his life (in his mid fifties) than Morgan's political cartoons.

In the early 1870's, Morgan worked on revivals of the musical "Black Crook," contributing allegorical paintings of

five temptations and a moving tableau called “Immortality." They show how a young Venetian student, who has just graduated at college, is tempted by a character, in Mephistophelian guise, with wine, wealth, woman, power, and fortune in war. He resists all these temptations, and the moving tableau shows how he is borne aloft to heaven by twenty angels as a reward for his adherence to virtue. The paintings are masterly in effect and beautiful in detail. (New York Times, July 14, 1873)


inaugurated one of the most controversial entertainments of the day -- "Mr Matt Morgan's Magnificent Classical Tableaux" -- comprising a series of tableaux vivant of well-known works of art, and "enacted" by "A Corps of Ladies of Unrivalled Beauty...especially engaged to carry out the Artist's ideas" (Theatre Comique Program, 1875, Nov. 15). For propriety's sake, the ladies were clad in flesh-colored body stockings whenever they were called upon to model Classical nudes, in a style reminiscent of the Pantomime fairies of Morgan's London days. Including reconstructions of Botticelli's "Birth of Venus," Rubens's "Diana and Her Nymphs, Surprised," Emile Jean Horace Vernet's "The Slave Merchant," and Jean-Léon Gérôme's "Phryne Before the Tribunal," the show was advertised and critiqued on the basis of its artistic merits. --Sex, Art, and the Victorian Cartoonist p314


The controversy over Morgan's shows recycled the old debate about Hiram Powers and The Greek Slave. In New York, Morgan publicly defended his work in court against charges of immorality. The case, as freely and lightly summarized in the Sacramento Daily Union, would investigate the tension between "Art and Public Morals":


Mr. Matt. Morgan is an artist, and was at one time employed on Frank Leslie's Weekly Illustrated Paper. Then he undertook to manage the Theatre Comique, and his artistic disposition led him to present the public with a new kind of entertainment, called for the nonce " living classic pictures." The idea is to represent classic pictures, fables, etc., by living persons properly (or improperly) costumed; and Mr. Morgan's conception of the public taste has led him to select those "pictures" in which the beauties of the female form are exhibited under the most free and untrammeled conditions. For example, he displayed "Cleopatra before Caesar;" and as everybody knows that Cleopatra, when unrolled from her tapestry on that occasion was, as Tennyson says of Lady Godiva, "clothed on[ly] in loveliness," and in very little else, the representative of the Egyptian Queen was necessarily restricted to a complete suit of tight-fitting pink silk induements. Another picture was "The Shower of Gold," in which a Circassian Danae reposed upon a divan, modestly shaded by a blue silk parasol in the hands of an attendant — "only this and nothing more." Now the Young Men's Christian Association have declared that the "classic pictures "at the Theatre Comique are indecent, and have, through the valiant Anthony Comstock, haled Mr. Morgan before the magistrates. The manager on his part is indignant. He says that he has aimed to instruct the New York people in the beauties of Art; that he has been furnishing them with purely classic representations; that it would be absurd to put Cleopatra in crinoline and corsets; that Danae never could have worn a pin-back; and that, as Bulwer would undoubtedly have remarked under similar circumstances, the True is the Beautiful, and the Beautiful is the Good. Meantime the public watch the contest with bated breath, possibly reflecting that after the class of dramatic spectacles which has held the boards during the past decade without active interference on the part of Young Men's Christian Associations, and while Art in the form of such pictures as the "Andromeda" is welcomed to the most public exhibitions, it is a rather delicate operation to draw the line sharply upon Mr. Morgan's "classic" pictures" or, as they would be called in Paris, his poses plastiques. --Sacramento Daily Union, 18 December 1875 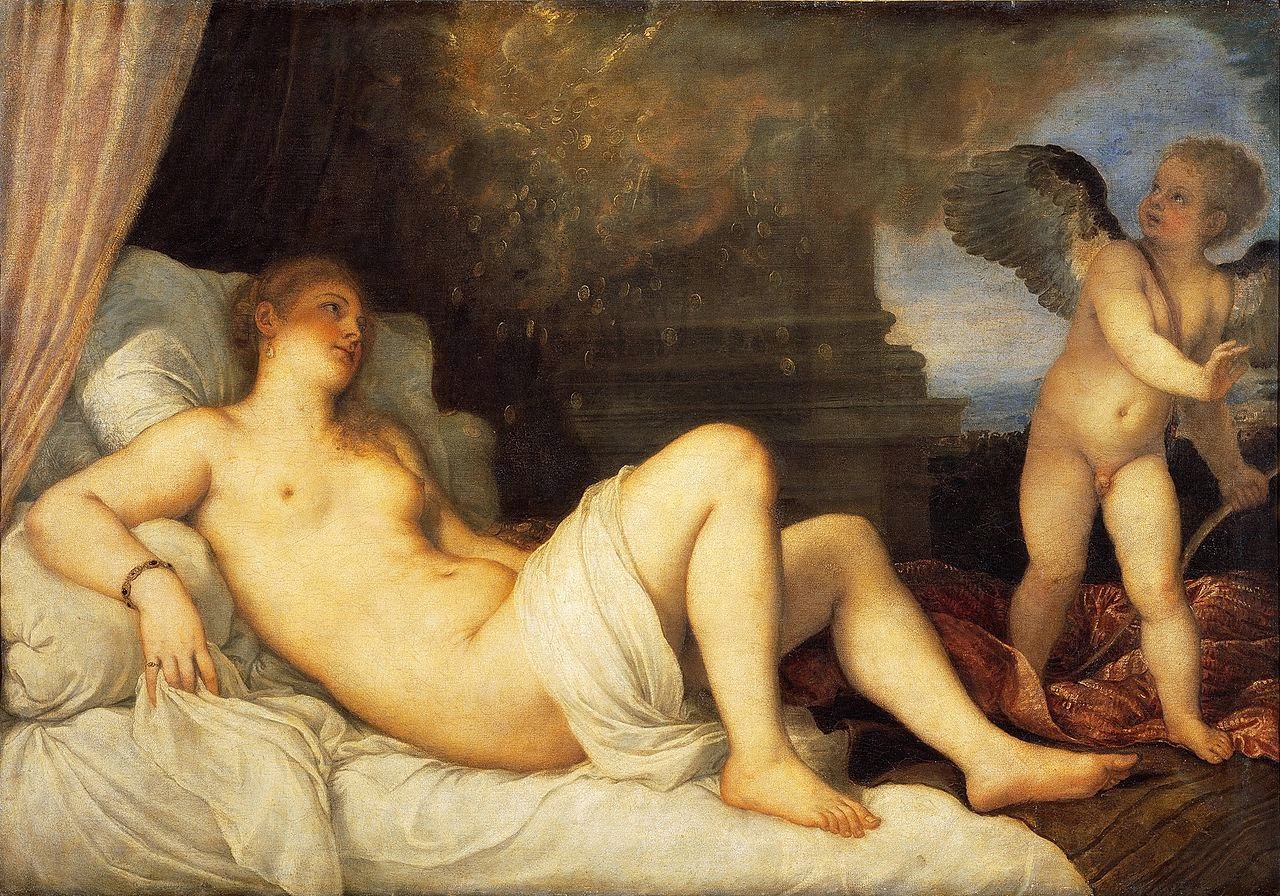 This (1872-1877) was prime time to see Matt Morgan at work. He successfully defended the charge of indecency in New York, although the next year in Louisville, police would shut down the show.


Having pushed the boundaries of acceptable entertainment, Morgan did not return his attention to the semi-scandalous after 1877, instead turning his not inconsiderable skill to more mundane, commercial forms of art. --Sex, Art, and the Victorian Cartoonist p320

Well we already knew Melville liked to visit artists in their studios. Douglas Robillard points out that when traveling abroad,


"Melville made a point of visiting, or attempting to visit, American artists who were living and working in Italy." --Melville and the Visual Arts, p27

In March 1857 Melville had visited the studio of sculptor Hiram Powers, a "plain man" and "Fine specimen of an American" as Melville described him in his journal.


"... to spend an hour or two with Hiram Powers in Florence was to have a tutorial in aesthetics."  --Hershel Parker, Herman Melville V2, p492

Upon his return from Europe and the Holy Land, the first professional thing Melville did was lecture on classical art. Statues in Rome! At Matt Morgan's New York studio, Melville (though legendarily shy and taciturn until warmed up) might have found congenial company, and glimpses perhaps of classically themed art in progress. And for properly warming up, that washtub of claret punch.

Posted by Scott Norsworthy at 10:21 AM