angels with jars, in the stars In thoughts of the visions of the night, I saw long rows of angels in paradise, each with his hands in a jar of spermaceti. -- Moby-Dick

Ishmael's image of angels in paradise is a meditative vision of the night: borne of dreams, but also perhaps the product of stargazing. Maybe Ishmael means visions of the night SKY. His phrasing echoes Job 4:13 where Eliphaz begins to relate a fearful nightmare. The book of Job has been called "the most distinctively astronomical part of the Bible" (Catholic Encyclopedia). Job's "chambers of the south" (Job 9:9) are constellations in the southern hemisphere, admired in the fourth book of Clarel by another Ishmael, Ungar, that "wandering Ishmael from the West" (4.10):


But Ungar, islanded in thought
Which not from place a prompting caught,
Alone, upon the terrace stair
Lingered, in adoration there
Of Eastern skies: "Now night enthrones
Arcturus and his shining sons;
And lo, Job's chambers of the South:
How might his hand not go to mouth
In kiss adoring ye, bright zones?
Look up: the age, the age forget--
There's something to look up to yet!"  (Clarel 4.7)

As John M. J. Gretchko first noticed in Melvillean Ambiguities, one of the star maps by Julius Schiller in the Harmonia Macrocosmica  of Andreas Cellarius shows, besides the jar-toting angel in Hyrdria Chananaea, the figure of Job as a southern constellation. 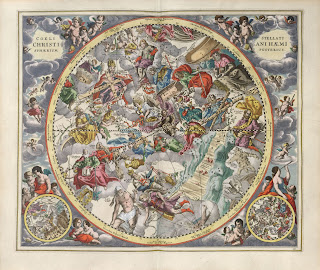 There he is near the bottom of the map, just left of center:  Job. 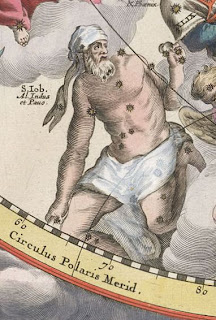 Back to Ishmael's vision in Moby-Dick as a vision of the night sky, how wonderful is this?  nine asterisks, all in a row! 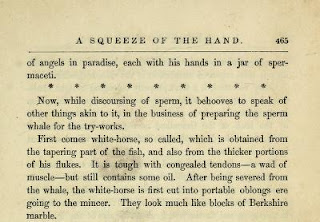 Ilana Pardes sees it: "The row of asterisks that follows his description adds a visual correlate of angelic stars while hinting at what remains inexplicable in the “inexpressible sperm.” (Melville's Bibles, 30) Pardes is also instructive, and eloquent, on the contrast between the comical serenity of Ishmael's vision and the "manipulative use of divine terror" by Eliphaz in Job:


“Instead of fear and trembling, he puts forth a very different concept of divine vision that is based on a more fluid and playful crossing between the heavenly and earthly spheres. (Melville's Bibles)


a more fluid and playful crossing between the heavenly and earthly spheres.

That's it! In his recent reading of the same passage, Caleb Crain gets that "the realms of heaven and earth have collapsed into each other" but regards the collapsing as something perilous--a hostile, faithless, "desperate" move (Melville's Secrets, Leviathan Volume 14, Issue 3, October 2012, pages 6-24 at page 16). That's why we need to look up every now and then. That collapsing of realms, that "crossing between the heavenly and earthly spheres" is Melville at his wicked and spotless best. It's the essence of poetry. Alongside the comment by Ilana Pardes on Melville's "fluid and playful crossing," compare the similar idea advanced by David Atwood Wasson while essaying to define poetry, especially poetry in relation to the aims of epic tragedy:


"Poetry is the free reading up and down from Nature to Spirit and from Spirit to Nature, each seen in the other.  The outward feature of Nature and life must be preserved, with the finest, most delicate exactitude, that we may not read in a blurred type; and yet in all the soul must find its own immanent secret."  ("Epic Philosophy" in Beyond Concord)

And here we are again, back to secrets.

For more on Melville in the stars, let's check out


John F. Birk's Tracing the Round

and don't' forget the prince of desert astronomers Dan Matlaga and his illuminating posts for Ishmailites, a few of which are still up here, at Pequod's End.

Posted by Scott Norsworthy at 9:34 AM No comments:

Visions of angels with jars

Thinking about Ishmael's vision of angels with jars of spermaceti (Moby-Dick, chapter 94) after reading Caleb Crain on Melville's Secrets led me to the "jolly angel with the jar" in the poem below, a sestet embedded in the amber vase of Melville's prose sketch "Under the Rose":

Attributing the original verses to the Persian poet Sugar Lips, Melville's fictive narrator "Geoffrey" ostensibly gives the impromptu translation by a Greek polyglot under the influence.

As Geoffrey explains at the start of the sketch, angel and jar appear in miniature "relievos" that adorn a particularly attractive amber vase of roses:


“They were of a mystical type, methought, something like certain pictures in the great Dutch Bible in a library at Oxon setting forth the enigmas of the Song of the Wise Man, to wit, King Solomon. I hardly knew what to make of them; and so would as lief have seen the roses in their stead.  Yet for the grace of it, if not the import whichever that might be, was I pleased with a round device of sculpture on one side, about the bigness of my Lord's seal to a parchment, showing the figure of an angel with a spade under arm like a vineyarder, and bearing roses in a pot; and a like angel-figure clad like a cellerer, and with a wine-jar on his shoulder; and these two angels side by side pacing toward a meagre wight very doleful and Job-like, squatted hard by a sepulcher, as meditating thereon; and all done very lively in small.”

So then, could Geoffrey's jolly angel and Ishmael's visionary angels with jars have been inspired by a similar, possibly traditional motif in some painting or engraving of paradise?   Turns out it's harder than I imagined to find a picture of an angel with a jar.  Then I remembered, John M. J. Gretchko found one in a Christianized map of the constellations.  In his 1990 note on "Herman Melville and Andreas Cellarius," Gretchko shows Melville's probable debt for several images in "Under the Rose" to the second of Julius Schiller's two star charts as published by Cellarius in the Harmonia Macrocosmica.  (Melvillean Ambiguities, 47-49)

Angel with jar on shoulder, check.
Yes it's a water jar, but look! it's that jar from the wedding feast at Cana, where Jesus turned the water into wine.  So it's both, a water-jar and a wine-jar.

Gretchko takes the "cellerer" detail in Melville's sketch as an allusion to Cellarius.  Plausible enough, though something more seems to be going on with the garden and tomb imagery of "Under the Rose."  Melville's narrator Geoffrey specifically likens the reliefs in amber to bible illustrations, allegorical representations of the Song of Solomon.  A number of New Testament scenes familiar to Melville are traditionally associated with Christian readings of the erotically charged Song of Songs as an allegory of Christ and the Church, including the Cana wedding and Mary Magdalene at the empty tomb, encountering the risen Christ as a gardener.

Melville revisits Mary Magdalene's vision of Jesus as gardener in Clarel 1.5, in lines that recall also the engraving Melville owned by G. Levy after Rembrandt, Noli me Tangere. As Robert K. Wallace shows in his March 2000 Leviathan article on Melville's Prints.

Clarel and where else, I wonder.

Posted by Scott Norsworthy at 11:25 PM No comments:

Under the Rose, Footnote to Caleb Crain on "Melville's Secrets"

In the October 2012 Leviathan Caleb Crain bravely explores essential passages by Melville on love, sex, and death. In a way Crain's article complements the more sharply focused study by Beverly Voloshin which demonstrates the influence of Plato's Banquet on key passages from Melville's letters to Hawthorne, the "Mosses" essay, and Clarel. On the theme of secrets, Crain manages in a short space to bring together and provocatively elucidate some of the most challenging texts in (besides Melville's Hawthorne correspondence and "Mosses" essay) Moby-Dick, Pierre, and Clarel.

Crain's "Excursus" on "A Squeeze of the Hand" in Moby-Dick is fine and to my mind only the beginning of a response to the really great question of Melville's source (personal experience? imagination? yet unidentified writings by others?) for the description of sperm squeezing. Some day I might venture more also about the meaning of the squeezing--conveyed in the illustrated moral that Ishmael derives from the story, the lesson delivered in Ishmael's picture of angels with jars of spermaceti in paradise.

Speaking of angels with jars, there's another one in "Under the Rose," the prose and poem combo in manuscript at Houghton Library, rarely and only posthumously published. Thankfully you can find that "jolly angel" in the Modern Library edition of Melville's Tales, Poems, and Other Writings, edited by John Bryant. Considering the title, the suggestiveness of sub rosa, the angel and jar, the explicit reference to Death's open secret, I thought the poem at least would make a fitting footnote to Crain's essay:

What it means is another thing, obviously. I need to think some more about that angel.

Posted by Scott Norsworthy at 9:18 AM No comments: