PUTNAM’S MONTHLY FOR OCTOBER.—The October number of Putnam is a worthy representative of American periodical literature. Its contents are finely varied and are creditable specimens of substantial, instructive, and interesting literature….

... The story of “Benito Cereno” opens well, but rather hangs fire toward the close of its first part. But a lively denoument may redeem it.—There is interest ahead in it.

The expression hang fire is a military metaphor for delayed action, like delayed ignition of gunpowder in firearms. To "hang fire" means

"to be slow in communicating, as fire in the pan of a gun to the charge."
-- Noah Webster, 1828 American Dictionary of the English Language

In the 1855 magazine version of "Benito Cereno," the first installment closes with Melville's Delano musing on the possibly treacherous intentions of Don Benito. Delano fears the Spanish captain might be a murderous pirate. The American wavers, but his generous and trusting nature overcomes suspicion of a sinister plot against his life. Melville's narrative powder finally fires in the third installment, after Benito Cereno jumps into Delano's boat.

Another Kentucky reviewer had no expectation of an exciting finish in store. From the Louisville Daily Democrat, October 4, 1855:

"Benito Cereno," a tale, begun in the present issue, is a fanciful production, not having any great interest--very little force--and rather prosy. Some of the sentences are almost Broughamic in their length, indistinctness, and general construction.

Broughamic alludes to the discursive debating style of Henry Peter Brougham, the eminent Whig reformer and abolitionist who helped establish the Edinburgh Review. In 1828 Brougham delivered the longest speech ever in House of Commons, over six hours.

Posted by Scott Norsworthy at 3:46 PM No comments:

A One-footed or One-Legged American God

A One-footed or One-legged American God

Herman Melville explored the mythologies of many nations, from India to Egypt to classical Greece and Rome. Would he have ignored North American mythology? Chapter 36 “The Quarter-deck” of Moby-Dick suggests he may have significantly dabbled in it.
Melville writes of Ahab:

“Did you fixedly gaze, too, upon that ribbed and dented brow; there also, you would see still stranger foot-prints--the foot-prints of his one unsleeping ever-pacing thought”
-- Moby-Dick Northwestern-Newberry Edition page 160.

True, these metaphorical footprints on Ahab's forehead are not real---or are they? In the ancient lore of North Americans, footprints, appearing on the bodies of figures, symbolized the invisible presence of Tezcatlipoca, the chief god of the Toltecs or the Aztecs (Séjourné, Burning Water pages 174-6). This was the Lord of the Smoking Mirror, often depicted with one good leg and with the other missing a foot or a leg bitten off above the knee by Cipactli, the Aztec sea monster.
Cipactli was a crocodile, or according to the American Researches of Alexander von Humboldt, a whale with a horn in his forehead (Volume 1 page 338). Cipactli was tempted to the surface when the god used his foot as bait (Burland and Forman, Feathered Serpent and Smoking Mirror page 55). Tezcatlipoca in place of his torn appendage bore a mirror. Would the medallion-shaped tablet on the upper part of Ahab’s ivory leg be comparable?
The grandiose work, Antiquities of Mexico (1831-48) by Lord Kingsborough in nine monstrous volumes, each a labor to lift, holds drawings of this one-footed god from the Codex Fejérváry-Mayer, shown with an amputated right foot or leg. The Literary World of 7 April 1849 discloses that the Astor Library had acquired all nine volumes. Unfortunately Tezcatlipoca is not so identified in the text of Antiquities, nor do these volumes tell his story.
Today, images of Kingsborough's facsimile Codex Fejérváry-Mayer are accessible via The British Museum

The manuscript Codex is held by the World Museum Liverpool.
Although the name of the god is certainly not a household word, it was not unfamiliar in Melville’s day, having appeared as early as the sixteenth century in José de Acosta’s writings, later translated by Samuel Purchas.
Comical wordplay involving the Captain's performance of a "feat" on foot occurs later in The Quarter-Deck when Stubb whispers punningly “that Ahab must have summoned them there for the purpose of witnessing a pedestrian feat.” As overheard by Ishmael, Stubb makes an awfully good pun in reference to Ahab’s pacing on deck.
In chapter 19 The Prophet, Elijah calls Ahab "Old Thunder." In the "Quarter-Deck" chapter, Ahab “looked not unlike the weather horizon when a storm is coming up” (Northwestern-Newberry Edition page 161). In chapter 119, “The Candles,” Starbuck, amidst the thunder and lightning of an approaching typhoon and in “profound darkness,” hears a voice by his side and asks “Who’s there?” Ahab replies “Old Thunder” (Northwestern-Newberry Edition page 505). Apparently, Ahab speaks of himself. Then in chapter 124, “The Needle,” Ahab notices that his compasses are misreading: “I have it! It has happened before. Mr. Starbuck, last night’s thunder turned our compasses—that’s all” (N-N page 517). Here when Ahab says “thunder,” he means “lightning.” But this was accepted usage. Both Webster’s 1841 American Dictionary and John Ogilvie’s Comprehensive English Dictionary (London, 1864) in second definitions state:

“Thunder is used for lightning, or for a thunder-bolt, either originally through ignorance, or by way of metaphor, or because the lightning and thunder are closely united.”

Figuratively speaking, is Ahab thunder or lightning or both?
Back in chapter 36, with a storm approaching, Ahab warns, “Stand up amid the general hurricane, thy one tost sapling cannot, Starbuck” (N-N page 164). Is Ahab alluding also to himself, as a metaphoric hurricane? Could the image of one sapling metaphorically represent or suggest a leg?
Tezcatlipoca is a first rate atmospheric god and rules all weather conditions, as the popular writer Lewis Spence observed one hundred years ago in The Gods of Mexico, pages 113 and 115. Others have noted that Tezcatlipoca resembles and may be identical with the Mesoamerican Mayan god, Huracan (Guilhem Olivier, Mockeries and Metamorphoses page 106). In Melville's century lexicographers derived the word hurricane "from the Indian word hurica, which signifies the devil."

As paraphrased by Dennis Tedlock, Eva Hunt on page 242 in The Transformation of the Hummingbird (Cornell University Press, 1977) depicts Hurakan as

"both one-legged and a causer of hurricanes."

According to Hunt and others, the Mayan name Hurakan literally means "one-legged."
Did Melville fashion the "ungodly, god-like" Ahab with Tezcatlipoca in mind? 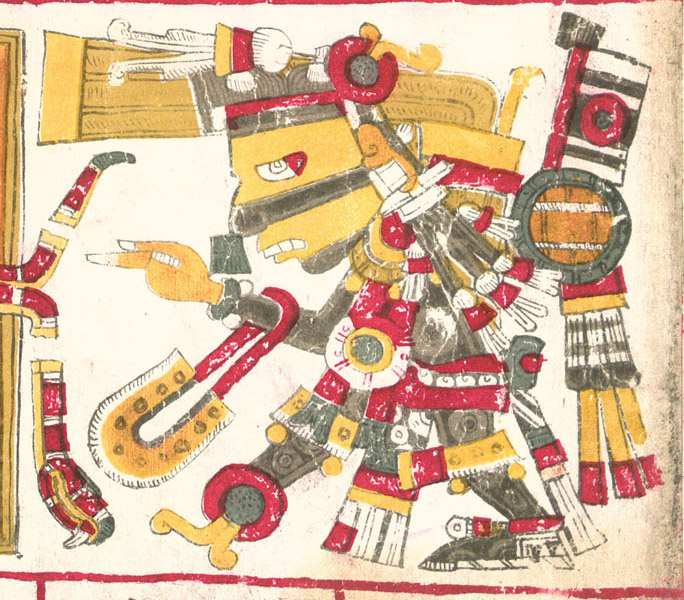 Melville, Herman. Moby-Dick; or, the Whale. Edited by Harrison Hayford,  Hershel Parker, and G. Thomas Tanselle. Volume 6 of The Writings of Herman Melville. Evanston and Chicago: Northwestern University Press and The Newberry Library, 1988.

Olivier, Guilhem. Mockeries and Metamorphoses of an Aztec God:Tezcatlipoca, “Lord of the Smoking Mirror.” Trans. Michel Besson. Boulder: U P of Colorado, 2008.

Posted by Scott Norsworthy at 6:53 AM No comments:

Veterans Day Observance Arlington National Cemetery: Robert Wilkie, secretary of Veterans Affairs, lays a wreath at the Tomb of the Unknown Soldier during a Presidential Armed Forces Full Honor Wreath-Laying Ceremony at Arlington National Cemetery, Va., Nov. 11, 2020. The ceremony is held in recognition and commemoration of the veterans who have served in the U.S. uniformed services.
Posted by Scott Norsworthy at 11:50 AM No comments:

Israel Potter: His Fifty Years of Exile by Herman Melville, 1991 | Online Research Library: Questia
Posted by Scott Norsworthy at 9:50 AM No comments:

“Thank you for your frankness,” said Paul; “frank myself, I love to deal with a frank man. You, Doctor Franklin, are true and deep, and so you are frank.”

The sage sedately smiled, a queer incredulity just lurking in the corner of his mouth.

Paul's genuine frankness contrasts with the more calculating and ambiguous behavior displayed by Benjamin Franklin. Hennig Cohen has noted how Melville's wordplay on the "frank" in Franklin looks forward to the ironic naming of Frank Goodman, the confidence-man's confidence man:

Paul Jones appears to be nothing if not frank, though Franklin, who appears at times to be less so, listens to his words with a lurking "incredulity" (99.12). Melville is once more turning to account the suggestiveness of a personal name. He is also anticipating the significant name, Frank Goodman, of The Confidence-Man (Chap. 29) who at times seems less than frank.

Posted by Scott Norsworthy at 9:48 AM No comments:

Moby-Dick in New York correspondence of the Daily Pittsburgh Gazette 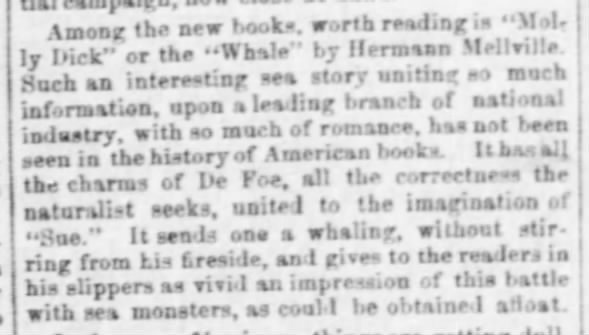 Among the new books, worth reading is "Mol-ly Dick" or the "Whale" by Hermann Mellville. Such an interesting sea story uniting so much information, upon a leading branch of national industry, with so much of romance, has not been seen in the history of American books. It has all the charms of De Foe, all the correctness the naturalist seeks, united to the imagination of "Sue." It sends one a whaling, without stirring from his fireside, and gives to the readers in his slippers as vivid an impression of this battle with sea monsters, as could be obtained afloat.

Posted by Scott Norsworthy at 10:47 AM No comments:

After Winter: The Art and Life of Sterling A. Brown, 2009 | Online Research Library: Questia

After Winter: The Art and Life of Sterling A. Brown, 2009 | Online Research Library: Questia
Sterling Stuckey as quoted in Part VI, A Symposium on the Life and Work of Sterling Brown:

One longs for Sterling’s satiric genius to be applied to current literary criticism, so much of which sags with horrendous jargon. Indeed, one quakes at the thought of his reaction to references to paragraphs being “unpacked,” to a subject being “interrogated.” One can easily imagine Sterling referring students to warehouses, police stations and to who knows what else. We may be sure that he would have a satiric antidote to the poison in the language of much criticism today.

Posted by Scott Norsworthy at 8:38 AM No comments:

The Two Temples by Herman Melville

But for all that, I will not be defrauded of my natural rights. In the first part of "The Two Temples," Melville's take on urb...