Put this in the category of  what Melville might have seen at Matt Morgan's studio in 1874. Besides, that is, older work like those allegorical paintings for scandalous revivals of Black Crook at Niblo's.

In March, Matt Morgan was known to be "at work upon a historical painting of the scene of Charles Sumner's death." (Hartford Daily Courant, March 19, 1874) The Albany Evening Journal gave the title as "The last moments of Senator Sumner" and urged readers to "give the mercenary draughtsman and his canvas a wide berth" (March 23, 1874). Not artist, mercenary draughtsman. This (lost?) painting of Sumner's last moments is not the picture by Morgan featured on the front page of Frank Leslie's Illustrated Newspaper for March 28, 1874. 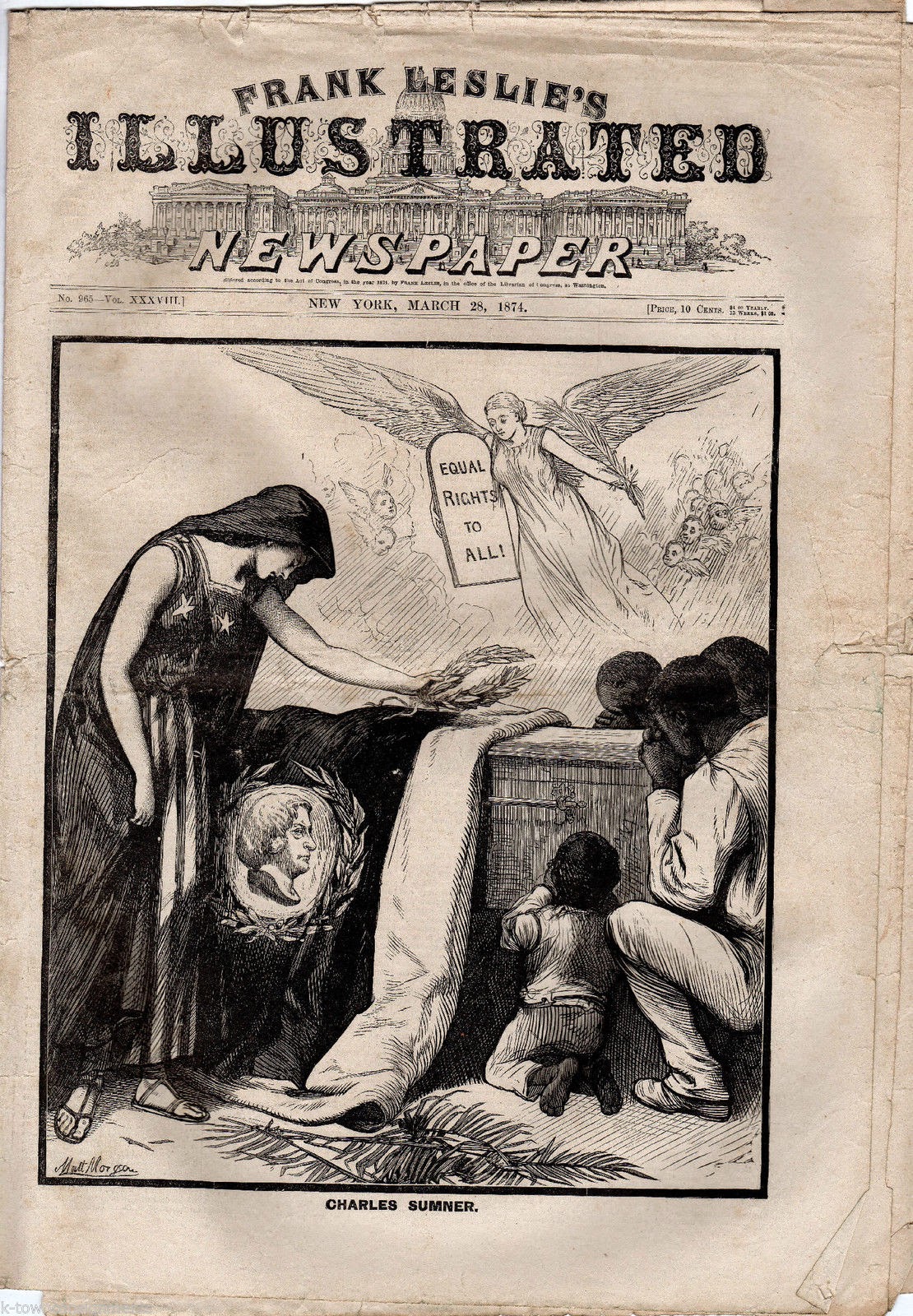 Morgan was also hard at work in 1874 preparing furnishings and scenery for his new theatrical venture, the Colosseum at Broadway and 35th street. According to the NY Commercial Advertiser, Morgan was "known as the chain-lightning artist, being the quickest man in his profession" (September 4, 1874). As summer waned, word of Morgan's latest project arrived from the resort town of Long Branch, New Jersey:

By-the-by, Morgan has become the manager of the Colosseum, which under his auspices is destined to exceed in the future the prestige of the past. Matt is hard at work at some new paintings which is to adorn the Colosseum. Among these is the Devil’s Gorge, a waterfall which in point of artistic merit and of weird, wild beauty, really surpasses anything of the kind hitherto attempted. Then there is a model upon a huge scale of the Mammoth Cave, a picture of Paris on fire, or Paris a la Commune, and a specially charming panoramic idealization or rather pictorial realization of Moore’s melodies.

Matt. Morgan is looking well, and, considering that he works on an average sixteen hours out of the twenty-four, manages to preserve his health and spirits wonderfully. He is in constant communication with Mr. Kinnard, his principal, the proprietor of the Colosseum, a gentleman  of great wealth and more than ordinary enterprise, and between the two the prospects of the Colosseum are flattering in the extreme.

--Commercial Advertiser, August 31, 1874; found in the Newspaper Archives at genealogybank.com

At a private showing on Saturday night, September 12, 1874 the artist previewed "Devil's Gorge," "Paris by Night," and "Paris in Flames." The NY Evening Post correspondent who attended wrote:

Two of Mr. Morgan’s latest efforts at scene painting, the “Devil’s Gorge” and the “Last Rose of Summer,” elicited encomiums on every side, and the entertainment concluded with an attack upon a heavily laden table, provided by the host.”
(Monday, September 14, 1874; found at Old Fulton NY Post Cards)

the grand realistic Cyclorama of

PARIS BY NIGHT
AND PARIS IN FLAMES

THE DEVIL’S GORGE
WITH SPARKLING CASCADES OF REAL WATER

Morgan and company employed thirty artists on the "Devil's Gorge" scenery according to newspaper puffs like this one in the New York Herald, September 13, 1874:


The Coliseum.
On to-morrow the Coliseum opens with a novel attraction—a cyclorama representing the magnificent scenery of “The Devil’s Gorge” in the world famous Ronda of Andalusia. This work has been in execution for some months past by Mr. Matt Morgan, from sketches made by him while on tour through Spain. In order to carry out this gigantic conception and to give it proper effect no expense has been spared by the management, from the fact that thirty artists are at work on the subject and the expected outlay will not be less than $25,000. This representation will consist of lofty peaks towering to the clouds, fearful precipices, jagged rocks and crags, from the heights of which rush down mountain torrents, and sparkling cascades of real water, through stalactite caverns, romantic vales and woodland glens. The pale moonlight, the shimmering waters, the ruined castles and the overhanging foliage form a coup d'œil of grandeur and beauty surpassing anything that has ever been presented in scenic illusions. A series of twelve tableaux, painted especially by Mr. Matt Morgan, illustrating the most beautiful of Moore’s melodies, with vocal and harp accompaniments, will also be presented.

In a similar announcement, the NY Evening Post identified one of “the chief attractions of the Colosseum for the forthcoming season” as


Devil’s Gorge, situated in the province of Andalusia, Spain. This novel work has been in course of execution for some months past by Mr. Matt Morgan, from sketches made by him while on a tour through Spain.
(Friday, September 11, 1874; found at Old Fulton NY Post Cards)


engaged upon two elaborate sets of “The Market Place Outside the Bastille” and “A Garden in the Time of Louis XIV.” for Booth’s Theatre.
--New York Herald, December 13, 1874

Posted by Scott Norsworthy at 6:58 PM