"No Trust" in Jack Ariel and The Confidence-Man 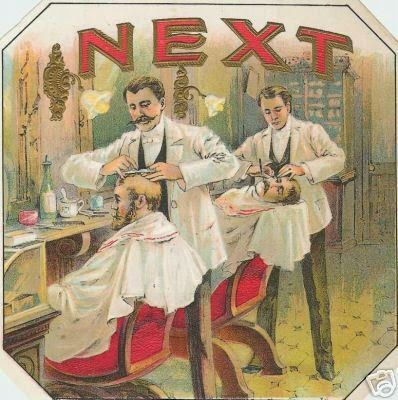 Update:
Some J. D. wrote Jack Ariel, was it John Dix or John Davis?  The title page of the 1847 edition identifies the writer of Jack Ariel only as


the Author of the "Post Captain," "Life in America," and "Life of Chatterton."

Dix has long been credited with an unreliable Life of Chatterton. But The Post Captain is apparently by Davis. This worldcat entry for a Philadelphia reprint of Jack Ariel gives the honor to John Davis.
---
In late chapters of The Confidence-Man, the "No Trust" sign in the steamboat's barber shop rankles Frank Goodman, a.k.a. the cosmopolitan:


But look, look—what's this ?" suddenly rising, and pointing, with his long pipe, towards a gilt notification swinging among coloured fly-papers from the ceiling, like a tavern sign, "No Trust?" "No trust means distrust; distrust means no confidence. Barber," turning upon him excitedly, "what fell suspiciousness prompts this scandalous confession?" (Confidence-Man)

The barber you remember is determined to be stubbornly practical, yet the cosmopolitan eventually swindles him out of a shave:


"Take it down, barber; take it down to-night. Trust men. Just try the experiment of trusting men for this one little trip. Come now, I'm a philanthropist, and will insure you against losing a cent."

A while back we looked at John Dix or Ross or Ross Dix and his reputation as a literary con man.  Considering his newspaper nom de plume of Cosmopolitan, it is fascinating to find now a shopkeeper's "No Trust" sign featured in an early scene from a novel of nautical adventure attributed to Dix, Jack Ariel; Or, Life on Board an Indiaman (1847).  Here it's a clothing merchant with "No Trust" in sailors. The young hero is a kind of British Redburn, only rich, going to sea for the first time:


The liberality of my father had amply stored my green silk purse with golden guineas—for in those days sovereigns were not known—and on the morrow of my arrival in the Metropolis, I repaired to a noted slop-shop in Leadenhall street, where Cadets, Middies and Guinea-pigs were equipped for the East Indies.

The shopkeeper, a merry looking little old man, said on learning my errand, that he would rig me out shipshape and Bristol fashion; and in a few minutes I contemplated myself in the pier glass over the counter, transformed from a school-boy into a sailor-lad, gallantly arrayed in a blue jacket with gilt buttons bearing the inscription of a rampant lion, white duck trousers, a check shirt and black silk handkerchief tied in a true lover's knot, a glazed round hat placed jauntily on my head to call attention to the auburn ringlets that half concealed my forehead, and long quartered shoes adorned with plated buckles of enormous dimensions.

"Did I not say," exclaimed the merry little old slop seller, "that I would rig you out shipshape. How much more becoming you look in this gallant geer than you did in your log-togs. Why there's my Missus gazing at you bewildered with your witching appearance, and if she can't keep her eyes off you, what will be the fate of the poor young girls as you beat to windward up Tower Hill, or go it large along Wapping. Missus, a'nt he a fine looking lad?"

"Yes, I've seen worse looking ones in my time."

"How well his trousers fit him—coming up high, and setting the build of his waist off to advantage, with an abundance of spare canvas about the feet. I don't stint my customers like some folks. There now I have done my duty towards you, and all you want now is a roll in your gait, and a care-for-nothing swagger in your motions."

"What is your name sir?" said I—asking him the question to stop his volubility.

"My name, sir, is Matthew Fitout."

"And how much do I owe you? I perceive 'No Trust' is placarded over your counter."

"No, young gentleman, I never gives trust. My customers are sea-farers, and a sailor, if you credit him, is always sure to pay you with the shake of the fore top sail."

"I asked you the amount of my bill."

He took down an old slate that hung suspended from a shelf, scratched some hieroglyphics on it, and then proclaimed the gross total to be two pounds, seventeen shillings and sixpence three farthings.

I threw down three guineas on the counter, and without waiting for the change made sail out of the shop, so anxious was I to exhibit myself in my new dress to the eager gaze of the multitude. (Jack Ariel)

Elsewhere in Jack Ariel is another reference to discharging debts "with a flying fore-top-sail":


Towards evening our ship had assumed the appearance of a Letter of Marque. Grog, accompanied with singing solaced the toil of the day, and among the ditties chanted on the forecastle, I recollect the chorus of one which given with great glee illustrated the character of our unprincipled tars:—

"Then well drink and be jolly, and drown melancholy,
Our spirits to cherish, our hopes, and our lives;
And we'll pay all our debts with a flying fore-top-sail,
And so bid farewell to our sweethearts and wives."

Melville alludes to the same enviable practice at the beginning of White-Jacket:


"... in the steerage, the middies were busy raising loans to liquidate the demands of their laundress, or else—in the navy phrase—preparing to pay their creditors with a flying fore-topsail."

Posted by Scott Norsworthy at 5:59 AM No comments: