This might be thought of as the back of the "back story" to Typee.  Melville's savviest contemporary critics recognized his romantic narrative of captivity in the Marquesas as a reenactment, in part, of real-life adventure tales already familiar in naval circles. This inside knowledge was alluded to by the reviewer of Omoo in the New York Literary World:


In the city of New York, especially, from which the three or four of Porter's surviving officers hailed originally, Typee was remembered in years far back as the theme of many a dinner-table yarn, when men used to tell longer and stronger stories over their Madeira than is now the fashion among modern sherry drinkers.
--Literary World, May 8, 1847

JOHN MINOR MAURY, Matthew's eldest brother, entered the Navy of the United States as midshipman when thirteen years old, and became one of the most distinguished young officers of his time. His whole professional career was one of active service and romantic adventure.

Just before the last war between the United States and England, John Maury procured a furlough, and went as first officer of a merchant ship, which had been chartered by Captain William Lewis of the United States Navy, who commanded her. They sailed on a trading voyage to China. Arriving at the Island of Nukahiva, one of the Marquesas group, Captain Lewis left Maury and six men there to procure sandal-wood and other articles of trade, for which the ship would touch on her return from China. The war with England broke out. English ships blockaded the American ships in the Chinese ports, and no relief came to Maury and his men for two years. It had, meantime, gone hard with them.

There were two tribes on that island hostile to each other, a volcanic ridge dividing them. The king of the tribe with whom the Americans made their home was friendly and true to them; but frequent incursions were made over the ridge, which was the barrier of his dominion, by the savages beyond it, and one by one the white men were slain, until Maury and a man named Baker alone remained alive.

They adopted every precaution against surprise, and the friendly king gave them notice of coming danger when he could. With the handiness of sailor-men, they found four cocoa-nut trees growing together, and in their tops made their home, not larger than a frigate's maintop, yet sufficient for their resting-place by day or night, and safe from discovery. A rope ladder was the means of ascent and descent, for this curious residence.

One bright morning, two years since their eyes had seen such a sight, a large square-rigged ship stood into the anchorage, and soon to their joy she displayed the American flag. Maury and his mate Baker came down from their perch, took a canoe, and pulled for the ship.* Their costume was as scant as that of the naked savages, who also sought to board this man-of-war, and the whole party were ordered by the sentry to keep off.

Maury returned to his nest in the cocoa-nut tree. Very soon, however, a launch from the frigate was sent ashore, and a group of officers came within hail, amongst whom Maury recognised an old shipmate, Lieutenant McKnight. At his hail the party looked up, and were astonished to see two white men, arrayed like Adam before his fall, descending from the tree-tops.

They were warmly greeted, taken on board the United States frigate 'Essex,' Captain David Porter commanding, were enrolled on the ship's books, and rated and equipped according to their rank.

Porter assembled his recent prizes in this anchorage, and refitted and watered his ship; he then pursued that famous cruise which swept the English commerce from the seas over which the 'Essex' sailed. Amongst his captures was a very fast sailer: he equipped and armed her as his consort, and named her the 'Essex Jr.' Lieutenant Downes was appointed her commander, with John Maury as his first lieutenant.

* See Porter's Journal of the Cruise of the "Essex."'
--A Life of Matthew Fontaine Maury


IN 1824, my father, Captain John Minor Maury, while serving as flag captain of Commodore David Porter's fleet against the pirates of the West Indies, died in the twenty-eighth year of his age. He had been an officer of the Navy since his thirteenth year, and had led a most active and adventurous life; and at the time of his death he was the highest ranking officer of his age in the service. Some years previously he sailed with Captain William Lewis as first officer of a ship bound for China. They had both obtained furloughs for this voyage. Maury, with six men, was left on the island of Nokaheeva to collect sandal-wood and other valuable articles of trade against the return of the ship.

The war with England broke out, and Captain Lewis was blockaded in a Chinese port. Maury and his men were beset by the natives of one part of the island, though befriended by the chief of that portion where ships were accustomed to land, and at last all of the party save Maury and a sailor named Baker were killed by the savages. These two constructed a place of refuge in the tops of four cocoanut trees which grew close enough together for them to make a room as large as a frigate's maintop. A rope ladder was their means of access. Here they were one day, when their eyes were brightened by the sight of a frigate bearing the American flag. It proved to be the Essex, Captain David Porter commanding, which had touched at the island for fresh water. Captain Porter had with him a very fast British ship which he had just captured. He named her the Essex Junior, and armed her as his consort, placing Lieutenant Downs in command, with Maury as first lieutenant. After refitting they sailed away to Valparaiso, where the British ships Cherub and Phoebe, under Captain Hilliard, fought and captured them.
--Recollections of a Virginian


Inspired by the adventures of his oldest brother, John Minor Maury, who had served under David Porter on the famous cruise of the Essex in the Pacific during the War of 1812, Matthew determined to enter the Navy . . . .
--Miles P. DuVal, Jr., Matthew Fontaine Maury: Benefactor of Mankind


John Minor Maury's letters of his adventures in the navy that were sent home are considered to be a major reason why Matthew Maury decided on a naval career.

Letters home from John Minor Maury?  Zounds! does any such letter survive, anywhere?

Matthew Fontaine Maury sailed with Herman Melville's cousin Thomas Wilson Melville; the two served together as midshipmen on the Vincennes (along with Chaplain Charles S Stewart):


. . . the Vincennes, on July 4, 1829, sailed from Callao toward the Far East. The first stop was at Nukahiva Island in the Marquesas, the island where Maury's oldest brother, John, had been marooned for 2 years and later rescued.

To learn the story directly from the native chief, Midshipman Maury studied the native language and, within a period of 3 weeks, became able to converse with the man who had saved his brother's life.

The next visit was at Tahiti, after which the Vincennes sailed to the Hawaiian Islands. On Hawaii, Maury saw the Cascade of the Rainbow and, no doubt, visited the volcano of Kilauea; on Oahu, he saw Diamond Head and enjoyed Honolulu.
--Benefactor of Mankind

The Vincennes reached the Marquesas in July 1829. 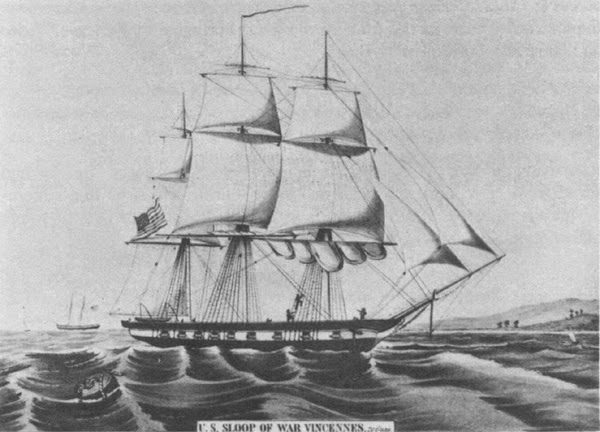 As the best critics recognize, "Tommo" the narrator of Typee is named after Melville's cousin Tom:


The full impact on young Herman of the “romantic” Tom, who may have regaled his cousins about his exploits at sea during his brief moments at home, should not be underestimated. And it is undeniable that in searching for a name for himself in Typee, Herman chose the cover of “Tom,” or Tommo, in honor of his cousin, who, like himself for a while, gave up "home and mother" and was lost at sea, but who, unlike Herman, did not make it back. --John Bryant, Melville Unfolding p69

So Melville named his narrator "Tommo" after his cousin Thomas Wilson Melville, who sailed with Matthew Fontaine Maury, whose older brother John Minor Maury beat all of them to Nuku Hiva.

Later: In 1859 Matthew Fontaine Maury was still telling tales about his older brother John Minor Maury at Nuku Hiva. Traveling with Nathaniel Parker Willis, MFF revealed that John Minor Maury had been tempted to remain on the island by the offer of "a princess for a wife." Willis got it all wrong in The Home Journal, as Patricia Jahns explains:

Commander Maury told of his brother John Minor s adventures on Nukahiva and how the old native king had offered him a princess for a wife if he'd stay there. Among his hearers was N. P. Willis, one of the fashionable writers of the day and a close member of the Paulding circle. His recollection of the events recounted by Maury left something to be desired on the score of accuracy. The Home Journal, over his signature, carried a lengthy description of the sedate Commander Maury s marriage, while a young sailor, to a princess of the Sandwich Islands. Maury had to laugh harder than anyone else or he never would have lived it down. The apology he requested was not for himself, he said, but for the princess, who was a most respectable lady. Willis, obviously fearing a libel suit, wrote Maury a letter so fulsome in its praises as to be ludicrous. He also added, well aware of Maury's troubles, that he had secretly vowed his pen to Maury s cause. But the damage was done, and Maury s name no longer looked so brilliant to the public. --Matthew Fontaine Maury and Joseph Henry

Posted by Scott Norsworthy at 10:32 PM