Readers who make it to the tragic end of Pierre; or, The Ambiguities (New York, 1852) will learn how Melville's desperate hero meets his cousin Glendinning Stanly in the street, and guns him down after getting horsewhipped in the face. Some critics have imagined a double murder, in the mistaken belief that Pierre also killed Frederic Tartan, brother of his ex-fiancée Lucy. Pierre could and probably would have gunned down Fred, too. But Fred refused to assault Pierre two on one, and thus was saved by his own noble sense of fair-play. Fred was a navy man, as Alexander Welsh observes at page 151 in Hamlet in His Modern Guises (Princeton University Press, 2001).

As generally recognized, the unnamed "City" where Pierre shot Glen is based on New York City. Pierre, armed with two loaded pistols, marches up a main thoroughfare just like Broadway. Down Broadway, Glen and Fred are coming for him.


Just as he gained a large, open, triangular space, built round with the stateliest public erections;—the very proscenium of the town ;—he saw Glen and Fred advancing, in the distance, on the other side. He continued on; and soon he saw them crossing over to him obliquely, so as to take him face-and-face. He continued on; when suddenly running ahead of Fred, who now chafingly stood still (because Fred would not make two, in the direct personal assault upon one) and shouting "Liar! Villain!" Glen leaped toward Pierre from front, and with such lightning-like ferocity, that the simultaneous blow of his cowhide smote Pierre across the cheek, and left a half-livid and half-bloody brand. --Pierre; or, The Ambiguities

The "large, open, triangular space" resembles City Hall Park, as pointed out in Henry A. Murray's 1949 Hendricks House edition. Melville makes a stage of it, presenting the scene of Pierre's crime as "the very proscenium of the town." Especially with reference to staging of classical drama, the word proscenium means "the stage of an ancient Greek or Roman theater" or "the stage itself."

Melville's American Hamlet shot his cousin on a metaphorical stage. Pierre is quickly arrested and imprisoned, and the novel ends with a Gothic tableau set in Pierre's cell. This prison-stage holds three corpses after the deaths there of Lucy, Pierre, and Isabel. Elsewhere Melville's narrator foreshadows the theatrical finish while musing on life as a play. Metaphorically, the drama of life is a tragedy that unfolds in acts and scenes:


By infallible presentiment he saw, that not always doth life's beginning gloom conclude in gladness; that wedding-bells peal not ever in the last scene of life's fifth act....

Decreed by God Omnipotent it is, that Death should be the last scene of the last act of man's play;—a play, which begin how it may, in farce or comedy, ever hath its tragic end; the curtain inevitably falls upon a corpse.

Posted by Scott Norsworthy at 1:16 PM No comments:

Chapter 5, Hamlet Decides to Be a Modernist, has a great take on Melville's Pierre as "Titanic failure":


"Basically, the novel takes a character of Hamlet-like mourning, confuses it with Promethean suffering and Faustian ambition for unprecedented experience, and latterly superimposes on this figure a career of writing" (page 155).

In Memoriam: Aexander Welsh
Posted by Scott Norsworthy at 9:42 AM No comments:

Sops for hell-hounds in PIERRE

This post aims to help readers achieve a better grasp of metaphorical language in Herman Melville's seventh book, Pierre; Or, The Ambiguities (New York, 1852). The need for such help may be seen in a few misleading footnotes for the 2017 Norton Critical Edition, edited by Robert S. Levine and Cindy Weinstein, that occasionally miss the boat, so to speak. Students, take heart. Faulty footnotes like the one on steamers as clams, discussed in a previous post, show that even highly trained professionals have trouble understanding what Melville wrote.

Another bit of editorial misdirection occurs in Book 25 (Lucy, Isabel, and Pierre. Pierre at His Book. Enceladus) at pages 331-2 of the NCE. Context: Pierre is a struggling author, having fled to the Big City with his pretend-wife (and alleged half-sister) Isabel, along with their farmgirl-friend Delly. Out of the blue, Pierre's angelical ex-fiancée Lucy Tartan has joined them. Lucy's brother Fred and her rejected suitor Glen Stanly have attempted one intervention already, a failure. Since Fred and Glen vowed "swift retribution," Pierre has every reason to expect intolerable public shaming of some kind, either a violent physical attack or a lawsuit. Granting the noble "manliness" of his sworn enemies, Pierre figures correctly that legal action will not satisfy Fred and Glen as "gentlemen of spirit":


... so invincible is the natural, untamable, latent spirit of a courageous manliness in man, that though now socially educated for thousands of years in an arbitrary homage to the Law, as the one only appointed redress for every injured person; yet immemorially and universally, among all gentlemen of spirit, once to have uttered independent personal threats of personal vengeance against your foe, and then, after that, to fall back slinking into a court, and hire with sops a pack of yelping pettifoggers to fight the battle so valiantly proclaimed; this, on the surface, is ever deemed very decorous, and very prudent—a most wise second thought; but, at bottom, a miserably ignoble thing.

The NCE editors rightly gloss Melville's word pettifoggers as "Inferior or disreputable lawyers" but mistakenly equate Sops with "fools." In context, Sops can't mean "fools." Fops are fools, and saps, but Sops are what you might pay lowlife lawyers with. Grose's 1785 Classical Dictionary of the Vulgar Tongue defines SOP as


"a bribe. A sop for Cerberus, a bribe for a porter, turnkey, or gaoler."

In a word, sop means bribe. Literally a piece of bread soaked in liquor, sop by extension may designate "anything given to pacify" according to Samuel Johnson's Dictionary of the English Language:


"SOP, sop, n. s. what is sopped; any thing steeped in liquor, commonly to be eaten; any thing given to pacify, from the sop given to Cerberus."

... Any thing given to pacify; so called from the sop given to Cerberus, in mythology. 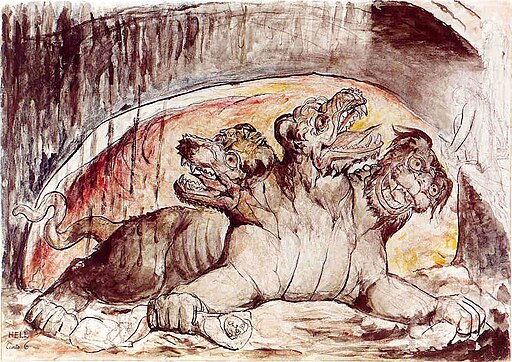 In the best dictionaries of Melville's day, the word "sops" itself calls out Cerberus. In Book 6 of The Aeneid, the Sybil of Cumae pacifies Cerberus with drugged honey-cake. Dryden translates:


The prudent Sibyl had before prepar'd
A sop, in honey steep'd, to charm the guard;
Which, mix'd with pow'rful drugs, she cast before
His greedy grinning jaws, just op'd to roar.
With three enormous mouths he gapes; and straight,
With hunger press'd, devours the pleasing bait.

In Pierre, Melville extends the allusion to Cerberus with an image of hungry curs, seemingly primed for attack. Literally a team of legal hacks, Melville's "pettifoggers" are depicted in figurative language as an aggressive "pack" of "yelping" animals--paid off like Virgil's Cerberus, in "sops." Literally, bribes.

Metaphorically then, Melville represents unscrupulous lawyers as dogs or Hounds of Hades. To sic litigious hell-hounds on Pierre would be the prudent way of exacting revenge. "We'll see you in court." However, as Pierre rightly calculates, his cousin Glendinning Stanley and Frederic Tartan are too noble for that course of action. Instead the cousins meet in the street, with tragic results you can read about in the Norton Critical Edition; the 1852 first edition; the 1949 Hendricks House edition; the 1971 Northwestern-Newberrry Edition; or Hershel Parker's Kraken Edition (Harper Collins, 1995), illustrated by Maurice Sendak.

Posted by Scott Norsworthy at 1:33 PM No comments:

Here's another favorable notice of Moby-Dick. This one is from the Cleveland Plain Dealer of November 21, 1851; found on GenealogyBank. The Plain Dealer was then edited by Joseph William Gray (1813-1862) with associate editor John Bell Bouton (1830-1902). Later, J. B. Bouton edited the Life and Choice Writings of George Lippard (New York, 1855) and joined the New York Journal of Commerce.

"MOBY DICK: Or, THE WHALE," by Herman Melville.

Among the new class of writers who have sprung into a reputation within the past few years, there is no one more generally admired by the popular reader than HERMAN MELVILLE.-- His forte is description, both in presentation of ideas and selection of words; and so much is he at home in each department, that the most captious critic can find little or nothing to strike out or amend. His last book indicates no falling off from the high standard of his "Typee," and "Omoo" but is, perhaps, more fascinating than either. The subject is entirely new, and readily gives rise to any quantity of those marvelous stories which have induced some reviewers to style our author "a second MUNCHAUSEN."

Posted by Scott Norsworthy at 9:29 AM No comments:

Without a central, searchable database of Melville reviews yet, it's no easy matter to determine if a possibly new find is really "new" in the sense of previously uncollected. Let's try anyway, for the benefits of exercise and discipline...

☑ Not in George Monteiro, Herman Melville: Fugitive References (1845-1922), Resources for American Literary Study Volume 33 (2008; AMS Press, 2010) pages 19-93. Monteiro points out in the introduction at page 20 that "a search using other terms (including misspellings of the obvious terms) may well turn up additional references."

☑ Not in Kent P. Ljungquist, "Melville in the Newspapers: Some Uncollected Reviews and Notices." Melville Society Extracts 89 (June 1992) pages 19-24.

Relevant content in these behemoths is accessible either by individual subscription (mine include JSTOR and Leviathan in Project MUSE) or via the nearest academic library that can afford them. For my test case of Omoo, JSTOR and ProQuest yield the highly relevant study by James L. Machor, Reading the Rinsings of the Cup in Nineteenth-Century Literature Vol. 59, No. 1 (June 2004) pages 53-77. All about the early reception of Omoo, but nothing there about George D. Prentice or the Louisville Journal.

I also like to double-check Hershel Parker's Herman Melville: A Biography, 1819-1851 and Herman Melville: A Biography, 1851-1891. 2 vols. Baltimore: Johns Hopkins University Press, 1996 and 2002; and Melville Biography: An Inside Narrative. Northwestern University Press, 2012. Parker in V1 of his biography at page 314 has the reference to George D. Prentice as "Prentiss the witty editor of the Louisville Journal" in Allan Melville's October 1844 letter to Herman. No further mention of Prentice there, or any Melville notice in the Louisville Journal. Kevin J. Hayes keeps discovering new items, so it's a good idea to consult his brisk but fact-rich biography Herman Melville (Reaktion Books, 2017); and Melville in Context (Cambridge University Press, 2017), edited by Hayes with topical chapters contributed by dozens of distinguished scholars.


NEW WORKS.-- Omoo, a Narrative of Adventures in the South Seas, by Herman Mellville. Mr. Mellville's former work, Typee, met with extraordinary favor. It was universally pronounced one of the most interesting books of adventures ever given to the public. The present work relates the adventures which afterwards befel the author in the South seas. It is a most pleasant book, and contains a great deal of information in regard to the Polynesian islands which cannot be elsewhere procured. It will doubtless be eagerly sought for by all those who have read the author's former work, and we advise our readers generally to do likewise. The title has a strange and foreign sound. Omoo is a word, as the author tells us, borrowed from the dialect of the Marquesas islands, where it signifies a rover, or rather a person who wanders from one island to another.

It is for sale by Mr. G. W. Noble, at the Literary Depot.

Posted by Scott Norsworthy at 9:04 AM No comments:

Posted by Scott Norsworthy at 11:50 AM No comments:

Little Richard - Rip It Up

Posted by Scott Norsworthy at 6:55 PM No comments:

Posted by Scott Norsworthy at 12:30 PM No comments:

Posted by Scott Norsworthy at 12:14 PM No comments:

Posted by Scott Norsworthy at 11:09 AM No comments:

Posted by Scott Norsworthy at 10:55 AM No comments: