Under the headline "Father Mapple" the Philadelphia Inquirer on November 22, 1851 published a long passage combining segments from chapters 8 and 9 of The Whale.

The Inquirer took this excerpt on Father Mapple from Moby-Dick (the London edition, titled The Whale), reprinting the text of the British edition from "I had not been seated very long . . ." to "Beloved shipmates, clinch the last verse of the first chapter of Jonah, 'and God had prepared a great fish to swallow up Jonah.' "

Father Mapple rose, and in a mild voice of unassuming authority ordered the scattered people to condense. "Starboard gangway, there! side away to larboard—larboard gangway to starboard! Midships! midships!" There was a low rumbling of heavy sea-boots among the benches, and a still slighter shuffling of women's shoes, and all was quiet again, and every eye on the preacher. He paused a little; then kneeling in the pulpit's bows, folded his large brown hands across his chest, uplifted his closed eyes, and offered a prayer so deeply devout that he seemed kneeling and praying at the bottom of the sea. This ended, in prolonged solemn tones, like the continual tolling of a bell in a ship that is foundering at sea in a fog—in such tones he commenced reading the following hymn; but changing his manner towards the concluding stanzas, burst forth with a pealing exultation and joy:


"The ribs and terrors in the whale,
Arch'd over me a dismal gloom,
While all God's sun-lit waves roll'd by,
And left me deepening down to doom.

"I saw the opening maw of hell,
With endless pains and sorrows there:
Which none but they that feel can tell—
Oh, I was plunging to despair!

"In black distress, I call'd my God,
When I could scarce believe Him mine,
He bowed his ear to my complaints—
No more the whale did me confine.

"With speed he flew to my relief,
As on a radiant dolphin borne:
Awful, yet bright, as lightning shone
The face of my Deliverer God.

"My songs forever shall record
That terrible, that joyful hour;
I give the glory to my God,
His all the mercy and the power."

Nearly all joined in singing this hymn, which swelled high above the howling of the storm. A brief pause ensued; the preacher slowly turned over the leaves of the Bible, and at last, folding his hand down upon the proper page, said: "Beloved shipmates, clinch the last verse of the first chapter of Jonah—" 'And God had prepared a great fish to swallow up Jonah.'  "


The Mapple excerpt printed in the Washington Daily Union (November 30, 1851) stopped at the end of chapter 8 and thus did not include the altered psalm with Melville's radiant dolphin.  The passage from the Philadelphia Inquirer (November 22, 1851) is the first and only newspaper excerpt from I have seen with Mapple's hymn. 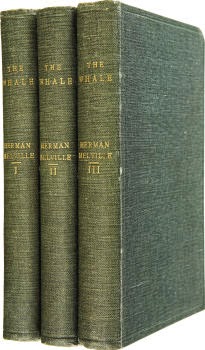 Posted by Scott Norsworthy at 11:08 AM