Elijah Burritt on the constellation Delphinus, The Dolphin; also known as Job's Coffin

Elijah Hinsdale Burritt gives the alternative name for the constellation known as The Dolphin: Job's Coffin. A most suggestive name for readers of Moby-Dick, considering the huge presence of the biblical Job throughout Melville's narrative, the white whale as a Job's whale, the rescue of Ishmael by means of Queequeg's coffin turned lifebuoy.


"AND I ONLY AM ESCAPED ALONE TO TELL THEE." Job.

The historical section of Burritt's entry for Delphinus in The Geography of the Heavens exhibits the prevailing conflation of the mammal dolphin or porpoise with the dolphin-fish (Mahi-Mahi, Dorado), the same confusion we observed previously in Leigh Hunt's Indicator. And probably Moby-Dick, in the figure of the radiant dolphin as re-imagined by Melville in Father Mapple's sermon.
In the Melville Society Extracts 38 (May 1979) John Gretchko identified Burritt's Atlas as the best candidate for Melville's "Atlas of the Heavens," now Sealts number 101a as shown in the catalog at Melville's Marginalia online. Gretchko distinguishes Burritt's Atlas from the companion volume Geography of the Heavens which he argues in Melvillean Ambiguities ("Herman Melville and Elijah Burritt's Astronomy") that Melville also read.

The Dolphin. This beautiful little cluster of stars is situated 13° or 14° N. E. of the Eagle. It consists of eighteen stars, including 5 of the 3d magnitude, but none larger. It is easily distinguished from all others, by means of the four principal stars in the head, which are so arranged as to form the figure of a Diamond, pointing N. E. and S. W. To many this cluster is known by the name of Job's Coffin; but from whom, or from what fancy, it first obtained this appellation, is not known.

There is another star of the 3d magnitude, situated in the body of the Dolphin, about 3° S. W. of the Diamond, and marked Epsilon. The other four are marked Alpha, Beta, Gamma, Delta. Between these are several smaller stars, too small to be seen in presence of the moon.

The mean declination of the Dolphin is about 15° N. It comes to the meridian the same moment with Deneb Cygni, and about 50 minutes after Altair, on the 16th of September.


"Thee I behold, majestic Cygnus,
On the marge dancing of the heavenly sea,
Arion's friend; eighteen thy stars appear—
One telescopic."


The Dolphin, according to some mythologists, was made a constellation by Neptune, because one of these beautiful fishes had persuaded the goddess Amphitrite, who had made a vow of perpetual celibacy, to become the wife of that deity; but others maintain, that it is the Dolphin which preserved the famous Lyric poet and musician Arion, who was a native of Lesbos, an island in the Archipelago.

He went to Italy with Periander, tyrant of Corinth, where he obtained immense riches by his profession. Wishing to revisit his native country, the sailors of the ship in which he embarked, resolved to murder him, and get possession of his wealth. Seeing them immoveable in their resolution, Arion begged permission to play a tune upon his lute before he should be put to death. The melody of the instrument attracted a number of Dolphins round the ship; he immediately precipitated himself into the sea; when one of them, it is asserted, carried him safe on his back to Taenarus, a promontory of Laconia, in Peloponnesus; whence he hastened to the court of Periander, who ordered all the sailors to be crucified at their return.


But, (past belief,) a dolphin's arched back
Preserved Arion from his destined wrack;
Secure he sits, and with harmonious strains
Requites his bearer for his friendly pains.

When the famous poet Hesiod was murdered in Naupactum, a city of Etolia in Greece, and his body thrown into the sea, some dolphins, it is said, brought back the floating corpse to the shore, which was immediately recognized by his friends; and the assassins being afterward discovered by the dogs of the departed bard, were put to death, by immersion in the same sea.

Taras, said by some to have been the founder of Tarentum, now Tarento, in the south of Italy, was saved from shipwreck by a dolphin; and the inhabitants of that city preserved the memory of this extraordinary event on their coin.

The natural shape of the Dolphin, however, is not incurvated, so that one might ride upon its back, as the poets imagined, but almost straight. When it is first taken from the water, it exhibits a variety of exquisitely beautiful but evanescent tints of colour, that pass in succession over their bodies until they die. They are an extremely swift swimming fish, and are capable of living a long time out of water; in fact, they seem to delight to gambol and leap out of their native element.

"Upon the swelling waves the dolphins show
Their bending backs; then swiftly darting go
And in a thousand wreaths their bodies show."

[Burritt's Footnote]: Where is the constellation Delphinus situated? What is the number and magnitude of its stars? How is this constellation distinguished from all others? What singular name is sometimes given to this cluster, and whence was it derived? Can you mention any other stars in the Dolphin? How are the others denominated? What is the mean declination of the Dolphin, and when is it on the meridian? 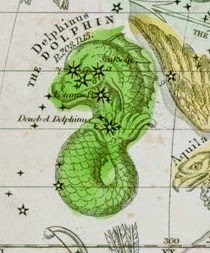 The possible allusion in Melville's "radiant dolphin" to the cosmic dolphin in the stars naturally makes me think of that angel with the jar in the star map of Cellarius. Again, John Gretchko takes the lead here in his Melvillean Ambiguities, the chapter on "Herman Melville and Andreas Cellarius."

Posted by Scott Norsworthy at 10:08 AM