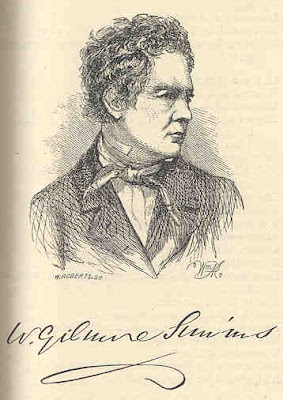 The deaf and dumb con artists portrayed in the 1850 newspaper item below prefigure the stranger with the slate at the beginning of The Confidence-Man (1857).  Besides that, the story offers credible evidence (previously unknown?) that Melville actually met Simms in person, more than once.


The Melvilles.—Two persons visited our town lately, under the above cognomen, one of whom represented himself to be Herman Melville, the destingished [sic] author of “Typee,” “Omou’ [sic], and “White Jacket.” They exhibited some beautiful specimens of penmanship, and expressed a desire to teach a class that useful art. They pretended to be deaf and dumb, which raised a suspicion in the minds of some, that they were not what they pretended to be. This suspicion caused a letter to be addressed to W. G. Sim[m]s, in reply to which, that gentleman says that he has, on several occasions, met Herman Melville, the author, and that he was in the full enjoyment of all his faculties, in as high a degree as any other person. Before the receipt of this letter, however, the Melvilles had sloped in the Northern stage.—Cheraw Gazette, 30th ult.

Posted by Scott Norsworthy at 10:55 PM No comments:

Notice of Battle-Pieces in the Troy Daily Whig 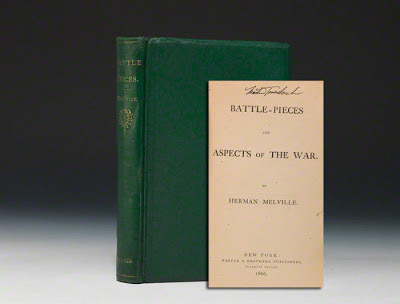 “Battle Pieces and Aspects of the war” is the title of a handsome volume of poems by Herman Melville. Mr. M’s muse was heard with great pleasure many times during the late war. His poetry has attained to great and deserving popularity for its beauty of rhythm, striking imagery and ringing boldness. His battle pictures especially are replete with beauty, force and feeling. The volume is appropriately dedicated to the memory of the brave men who fell in the late war. Published by Harper & Brothers. For sale in Troy by Wm H. Young.

Does the Troy reviewer mean Melville wrote lots of poems about the Civil War, as prompted or dictated by his muse, or that before publication, Melville was known to have declaimed his Civil War poems locally and informally, or that multiple poems had previously appeared in newspapers?  The claim of "great and deserving popularity" makes me wonder if the writer had Melville confused with somebody else--say George Henry Boker.

Five poems from Battle-Pieces had appeared in Harper's magazine, but too recently one would think to qualify as "many times during the late war."
Posted by Scott Norsworthy at 5:28 PM No comments:

Glorious! to find poetry by Melville appreciatively discussed in so respectable a place as the NY Times Opnionator, in the recent online commentary by Cynthia Wachtell, Melville's About-Face. Wachtell is doing something I love, comparing different versions of texts. John Bryant by the way wrote a great book about the pleasures of that enterprise, The Fluid Text, well deserving of wider readership. In her Opinionator piece, Wachtell essentially offers what Bryant would call a "revision narrative" to account for two small yet potentially significant changes Melville made (or rather tried to make before publication) to the text of his brief Civil War poem, "Inscription for the Slain at Fredericksburgh." As Wachtell explains, Melville wanted to change "Slain" in the title to "Dead," and "glory" to "dreadful glory." A third change, "Strown" to "Strewn" receives no comment. There we catch Melville regretting his grammar. To discuss that about-face gets you deep into the grammar of weak verbs with strong past participles. Yow! No wonder Watchell won't touch "strown" or "strewn."

Wachtell unconvicingly treats "slain" and "dead" as synonyms with different connotations or associations, one ("slain") more romantic and one ("dead") more realistic. But wait, these words are not semantically the same, not quite. Slain means killed by someone, even murdered, violently--right? Slain conjures the slayer. Dead seems by contrast more neutral, concerned with the fact of death, not the manner. Melville's tribute memorializes the military dead as proactive heroes of their own lives. They acted bravely, performed a deed worthy of a song. Slain threatens to steal some of that hard-won glory from the patriot and give it to the rebel. Forget for now the Confederate slayers, this one is for the noble Union dead.

Wachtell reads the d-words "dead" and "dreadful" as attempts by Melville to modify a conventionally pious stance through the "starker" language of "nascent realism." This interpretation strangely conflates romanticism and reverence, regarded as equally quaint and delusional, apparently, to which Wachtell opposes realism, regarded it seems as a later, less embarrassing stage of human development. But who in the world, any world, wants realism on a memorial inscription to dead soldiers? But let that go, for now. I truly meant to consider "dreadful glory," the interesting change from this


A glory lights an earnest end;

Wachtell sees in "dreadful" a change of heart, Melville's "about-face" away from the familiarly worshipful "glory":


His insertion of “dreadful” to modify “glory,” like the substitution of “dead” for “slain,” subtly alters and challenges the otherwise reverential tone of the work.  (Melville's About-Face)

But here's the thing. The change to "dreadful glory" makes the tone more not less reverential. Whatever tension or conflict dreadful poses for glory is thoroughly traditional. The challenge perceived by Wachtell derives not from the dictionary of realism, but the dictionary of Protestant hymnody and theology. God's righteousness (glory) is conventionally placed alongside the terror of God's (dreadful) wrath. Melville's change to "dreadful glory" echoes a number of Protestant hymns, most notably Psalm 65 in the verse translation by the "progenitor of the English congregational hymn" Isaac Watts. Watts's psalms in Melville's day were widely available, collected (and awaiting perusal at Google Books) for example in popular hymnbooks such as A Pastor's Selection of Hymns (Philadelphia, 1860).


With dreadful glory God fulfils
What his afflicted saints request;
And with almighty wrath reveals
His love, to give his churches rest.

Then shall the flocking nations run
To Zion's hill, and own their Lord;
The rising and the setting sun
Shall see the Savior's name adored.
(Psalm 65, Isaac Watts)

We knew Melville liked to use (and abuse?) Watts. Hershel Parker has called attention to the borrowing from Watts in Moby-Dick:


The words to popular hymns were often composed by notable religious poets such as Isaac Watts and William Cowper. Melville makes his lank Bildad, for example, sing Watts’s “A Prospect of Heaven Makes Death Easy” as he pilots the Pequod out of Nantucket in chapter 22 of Moby-Dick. --Melville: The Making of the Poet

And we knew Melville made poetic use of other metrical adaptations from the Psalms, not only from Watts. Again in Moby-Dick, Father Mapple's hymn is reworked from Psalm 18 in the hymnal of the Protestant Reformed Dutch Church.
So rather than a jolt of "nascent realism," Melville's change to "dreadful" would have interposed the uncomfortable but nonetheless familiar Protestant view of God, or the divine, or divine dispensations, as terrifyingly awesome. This connection happens right away in the first line. Subsequent language similarly evokes Christian history and eschatology: a time of joyful restoration ("jubilee") when souls ("ghosts") are "transfigured." When are they transfigured?  The end time, raptured even to the "rapturous height" of, what, heaven?

No! The fallen at Fredericksburg are "transfigured" at the "rapturous height"


Of their passionate feat of arms.

Feat or defeat? Why "passionate"? Melville again employs biblical language to honor the dead as, well, like Christ and Christ's passion in their ultimate self-sacrifice.

The parallel to Christ is reinforced in the closing line, as Jason Skonieczny nicely points out in a comment on Watchtell's Opinionator essay:

As Skonieczny observes, the effects of the parallel are arguable. This indeed is where all the argumentative fun properly starts. Did the dead patriots martyr themselves, rapture themselves, transfigure themselves by their dauntless, thoughtless courage? And the best line has to be the fifth:


Death to the brave's a starry night,---

Wow! What could be finer than that? Melville liked it so well he ended "Chattanooga" with the same line, slightly revised, in Battle-Pieces.
But in the memorial poem for the fallen at Fredericksburgh, you need to get the allusion to Christ, and recognize some of the biblical terms and themes to begin to get what Melville was about.
Along with references to passion, palms, rapture and transfiguration, the nod to Watts in "dreadful glory" shows Melville aiming high, investing his brief "Inscription" with the hallmark of an old and much-beloved religious hymn.


Inscription For the Dead At Fredericksburgh

A dreadful glory lights an earnest end;
In jubilee the patriot ghosts ascend;
Transfigured at the rapturous height
Of their passionate feat of arms,
Death to the brave's a starry night,---
Strewn their vale of death with palms.

--Correspondence and Published Poems and Ishmailites 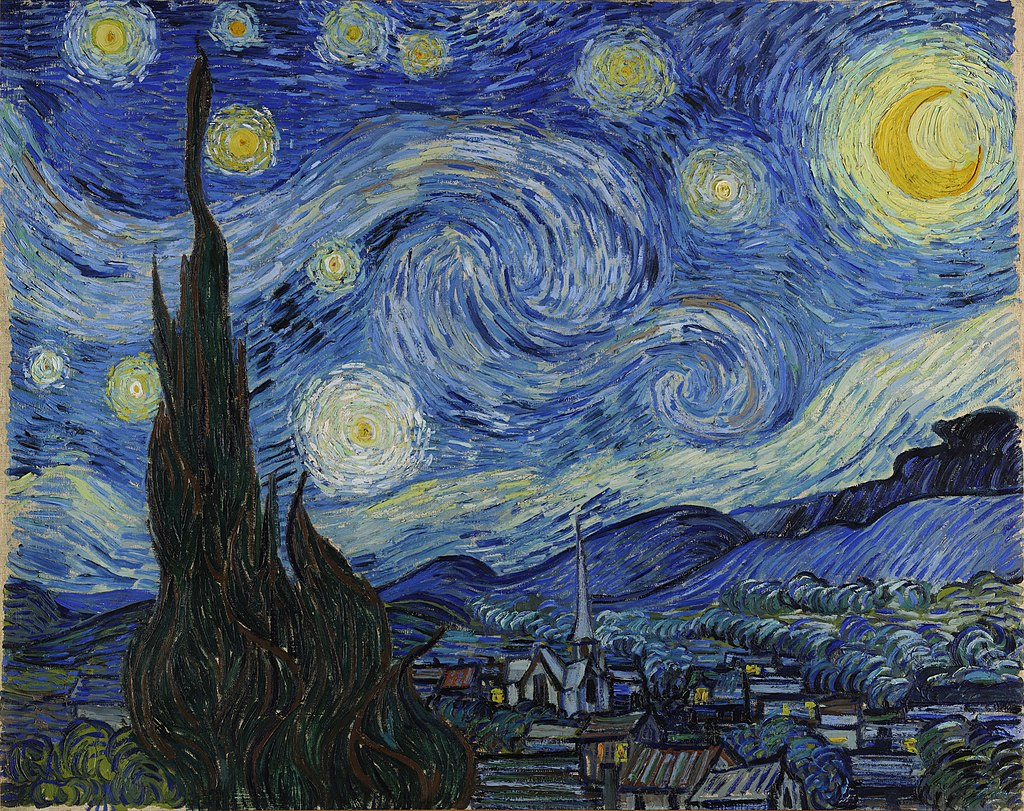 Posted by Scott Norsworthy at 10:36 AM 4 comments: