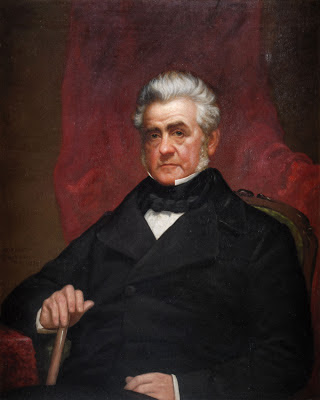 GOV. BOUCK IN THE CITY OF NEW YORK

… On Wednesday night, the proscribed watchmen and other democrats in the 11th ward, the headquarters of the New York Democracy, returning as it does 1200 democratic majority, invited the Governor to a grand supper. Some three hundred sat down to a table most sumptuously spread by Mr. Waring, the proprietor. Among the invited guests were his Excellency, the Hon. B. F. Butler, Ald. Purdy, L. B. Shepherd, Wm. McMurray, Gansevoort Melville, and others—by all of whom soul-stirring speeches and sentiments were given….

In honor of the Governor’s arrival, the 11th ward cannon was brought out, and alternated its thunder with the softer strains of a most excellent band of music.

MR. MELVILLE, in the course of his remarks, said “The people had tried the ‘old white horse.’ They had found him a good courser, they were going to put him on the track again, and when he once had his feet upon it, he was sure to go right through.” This was received with most hearty and repeated cheers. -- GenealogyBank.com

The New York Tribune, June 20, 1844, was quick to print this scornful reply (to an earlier printing of the report):


The Albany Argus thinks that in the late Eleventh Ward supper given to the ‘Old White Horse’ by the ’rank and file’ of this city, Mr. Master-in-Chancery McMurray officiated as ‘rank’ and Mr. Examiner-in-Chancery Melville as ‘file.’  Very likely.  They are two ‘nice men for a small party.’  -- Fultonhistory.com

Posted by Scott Norsworthy at 9:43 PM No comments:

Herman Melville was already on his way to Liverpool aboard the merchant ship St. Lawrence. His mother and family now made their home in Lansingburgh. From the Albany Evening Journal, Tuesday, June 11, 1839:


SHERIFF’S SALE.—By virtue of an execution issued out of the Supreme Court of the state of New York, to me directed and delivered, I have seized and taken all the right, title, interest and estate which Maria G. Melville had on the first day of May, 1837, or which she may since have acquired, of, in and to all that certain lot of ground known as lot No. 29, in the fifth ward of the city of Albany, bounded on Carroll street, between Spencer and Lumber Streets, with the buildings thereon, lately occupied by Chase & Smith as a fur factory; said lot is 38 feet front on Carroll street and 95 feet 6 inches in depth; and also two vacant lots, being part of the yard connected with the said factory, each of said lots being 24 feet in width, and each being upwards of 100 feet in depth, which I shall sell at public auction at the Mansion House, in the city of Albany, on the 27th day of June next, at 10 o’clock in the forenoon of that day.
Dated Albany, May 16, 1839.


"The sale of the above property is postponed until the 1st day of November next, at the same hour and place above mentioned. –Dated June 27, 1839.  MICHAEL ARTCHER, Sheriff"

The auction was again delayed until the 7th of February, 1840, as announced in the Evening Journal on Wednesday, February 5, 1840.
Posted by Scott Norsworthy at 6:58 PM No comments: 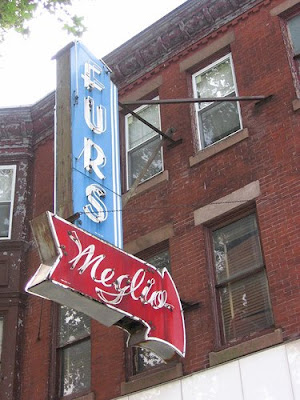 FURS, by order of the sheriff.—DAVIS & JONES will sell on Tuesday next, at 12 o'clock N at the Auction Room, the stock in trade of a Furrier.

TO LET.  The buildings on Dean st. between State and Hudson sts.  in the rear of the store of the subscriber, recently occupied as a hat manufactory by G. Melville and is well calculated for that or any other manufacturing purposes.  Possession given immediately.

Posted by Scott Norsworthy at 6:29 PM No comments: