Melville's Reviewers: British and American, 1846-1891 by Hugh W. Hetherington, 1961 | Online Research Library: Questia
Hetherington's last chapter on "Dead Letters" gives a fine biographical reading of Melville-as-writer in Pierre (1852) and Bartleby the Scrivener (1853).
Posted by Scott Norsworthy at 7:38 AM No comments:

Here is a contemporary notice of The Confidence-Man from the Yonkers NY Examiner of April 16, 1857. This one turned up on Newspapers.com among digitized pages just added within the past month.
Founded in 1856, The Examiner was published by Matthew F. Rowe (1829-1914), formerly editor of The Republican in Peekskill. Excerpts from this 1857 notice are given by Gary Scharnhorst in the second part of his two-part article, "Melville Bibliography 1846-1897: A Sheaf of Uncollected Excerpts, Notices and Reviews," Melville Society Extracts 75 (November 1988) pages 3-8 at page 7. It's listed as CM21 in the 1992 Checklist of Melville Reviews, edited by Kevin Hayes and Hershel Parker. Not reprinted in Herman Melville: The Contemporary Reviews, edited by Brian Higgins and Hershel Parker (Cambridge University Press, 1995). 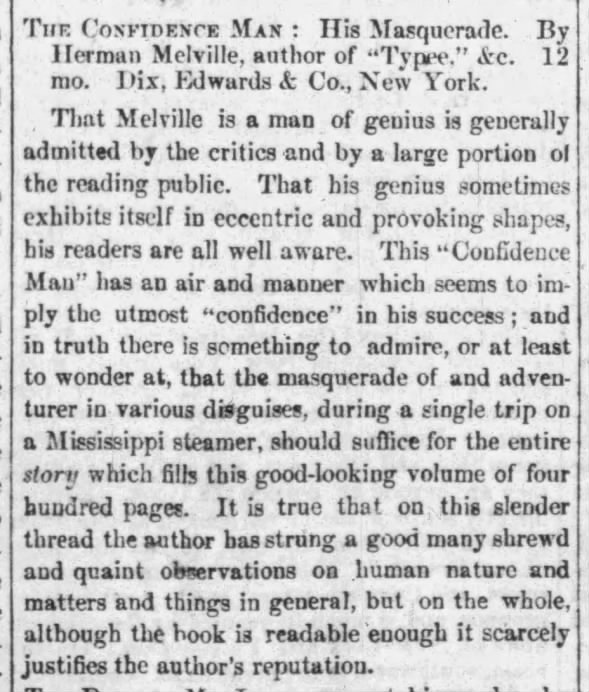 That Melville is a man of genius is generally admitted by critics and by a large portion of the reading public. That his genius sometimes exhibits itself in eccentric and provoking shapes, his readers are all well aware. This "Confidence Man" has an air and manner which seems to imply the utmost "confidence" in his success; and in truth there is something to admire, or at least to wonder at, that the masquerade of and adventurer in various disguises, during a single trip on a Mississippi steamer, should suffice for the entire story which fills this good-looking volume of four hundred pages. It is true that on this slender thread the author has strung a good many shrewd and quaint observations on human nature and matters and things in general, but on the whole, although the book is readable enough it scarcely justifies the author's reputation.

Posted by Scott Norsworthy at 7:52 AM No comments:

Although an abbreviated H Melville, found as such in New York City newspapers, can echo the person of Herman Melville, one must be careful drawing an easy conclusion, since a couple of H Melvilles existed in mid-century New York. However, at least two instances of H. Melville point to Herman Melville.

On 11 July 1846 in “ARRIVALS AT THE CITY HOTELS” from the New York Evening Express, H. Melville of Lans, so abbreviated from Lansingburgh, was checked into Dunning’s Hotel at 66 Cortlandt Street (Ground Zero on 9/11), diagonally across from the house where Herman had been a child. The proprietor was Smith Dunning. At this time Herman was in town to receive cuts to the expurgated edition of Typee and to make revisions to it and possibly to collect $150 from Wiley and Putnam from his Typee account (Jay Leyda, The Melville Log Volume 1 pages 221-2). This H. Melville is undoubtedly Herman Melville, who may have been staying at Dunning’s for several days.

In chapter 92 of Moby-Dick, “Ambergris,” Melville facetiously speaks of curing the dyspepsia of a whale by administering “three or four boatloads of Brandreth pills.”
Nine years later on 10 December 1860, Allan Melville, Herman’s brother, filed a complaint before the Supreme Court of the City and County of New York for plaintiffs Maunsell B. Field and Ward McLean, real estate brokers, against Benjamin Brandreth, famed and wealthy purveyor of purgative pills. (Field, also a lawyer, along with the illustrator Felix O. C. Darley had visited Herman at Arrowhead one summer in the early 1850s).
Brandreth had employed Field and McLean to negotiate a loan for $155,000 secured by a mortgage for the Brandreth House, a first-class hotel, at 294 Canal Street and the intersection of Broadway, Canal, and Lispenard Streets in New York City. Plaintiffs agreed to accept one percent commission. But the Mutual Life Insurance Company of New York, at first willing, declined to finance the loan, and Brandreth refused to pay the commission. But on 17 October 1862, Allan won the case for the plaintiffs against Brandreth, and the plaintiffs were paid their one percent and then some (case B-40). Curiously, an H. Melville of Massachusetts had checked into the Brandreth House the month before on 6 September 1862.
Barring a weird coincidence, this H. Melville should be Herman. In Albany Peter Gansevoort had written in his diary that after tea on 4 September Herman had taken the boat for New York (Leyda, Melville Log Volume 2 page 654).
Hershel Parker comments in Herman Melville: A Biography Volume 2, 1851-1891 (Johns Hopkins University Press, 2002), page 515: “What his purpose was in going is not known.” Had Allan sent Herman to inspect and assess the state of Brandreth’s collateral? If the hotel had deteriorated, then the failure of the loan was Brandreth’s fault.
Brandreth House, as described in the 1866 directory, Miller's New York As It Is, or Stranger's Guide-Book on page 69:

“The rooms are elegantly furnished---many of them in suites of communicating parlors and chambers, suitable for families and parties traveling together. Being kept on the European plan, guests may live in the most economical or luxurious manner. Meals served at all hours at the shortest notice.”

Posted by Scott Norsworthy at 1:07 PM No comments:

The Brooklyn-based yodeler: Mike Donovan and The Shifties

Posted by Scott Norsworthy at 8:56 AM No comments:

Email ThisBlogThis!Share to TwitterShare to FacebookShare to Pinterest
Labels: Bartleby

Can you make it rain harder?

--Bruce Rogers on Prince at the Halftime of Super Bowl XLI

Posted by Scott Norsworthy at 7:35 AM No comments:

BATTLE PIECES in the New York Weekly Journal of Commerce

From the New York Weekly Journal of Commerce for Thursday October 4, 1866; found on genealogybank.com. Before 1852, this newspaper was titled The Mercury, and weekly journal of commerce.


HERMAN MELVILLE, well known in former years as the author of several very readable books of travel and fiction, makes his appearance again as a poet. HARPER & BROTHERS publish BATTLE PIECES AND ASPECTS OF THE WAR from his pen. He writes, as he always did, with spirit, vigor, and an admirable conception of the value of words. Some of his verses, which are exceedingly rude in structure, derive great force from that very rudeness. The volume is supplemented by a prose article, in which Mr. Melville urges an instant close of the quarrel between North and South, of which, at present, it looks as if the war were only the commencement.

Posted by Scott Norsworthy at 8:31 PM No comments: