The Allen Ginsberg Project: Expansive Poetics - 11 ( Herman Melville): AG: Then, another heroic precursor, nineteenth-century, is Herman Melville , as a poet. How many here have run across Melville as...

Lecture/class interaction from 1981, transcribed at The Allen Ginsberg Project with a link to the audio.  Fine insights abound, like this about Melville's "vowelic melody":

Posted by Scott Norsworthy at 10:10 AM No comments:

We gave a brief notice of this work a few days ago. Since then we have read it with great interest, and the perusal has induced us to give it a more extended comment. Herman Melville stands in the front rank of American authors, and in those characteristics where lie his chief excellencies, has few living superiors in English literature on either continent. The purity and directness of his style, the interest, the charm which he throws around all matters he touches, in the hands of other men dull and heavy, the lifelikeness of the pictures he draws, whether of man, the works of man’s hands, or the works of nature, give him place with those authors whose simplicity and naturalness have made their intellectual children immortal. We did not commence this notice for the purpose of complimenting Melville’s powers. Little good can we do a man whose fame is rapidly making its way through all civilization. Our object was a different one.

There are movements making in various parts of the country for the suppression of “flogging in the navy.” Our ignorance as to the necessity or non necessity of flogging for the support of discipline, as well as the fact that under the pretence of philanthropy a thousand absurd and impracticable projects are started in these times, had prevented us from taking any particular interest in the mission of Mr. Holmes. The perusal of White Jacket has done much to enlist strongly our sympathies. It is a story of months of service on a man of war. Its descriptions are truthful even when most painful, and its comments are richly deserved even when most stern.

Herman Melville is no mawkish philanthropist spending his sympathies on criminals and vice, no quack reformer, seeking notoriety by loud professions of humanity and bitter abuse of all who will not adopt his crazy nostrums. He is a clear-headed, large-hearted, impartial delineator of what he saw and of which he was a part. He does not draw vivid contrasts for the purpose of a sensation. He does not present on the one side nought but humble, suffering virtue, and on the other nought but tyrannous depravity. He makes all classes appear just as they are. He holds the scales fairly between private and officer. But he holds up to severe condemnation the multiplied abuses of the American navy. He spares nothing which deserves rebuke. No dignitary on the quarter deck so exalted as to be above his honest lash, no private in the waist so humble as to be beneath his justice.

If what is here set down is true, and no one can doubt it, there is nothing on land or sea that calls louder for reform than a man of war; a reform of course characterized by sound judgment. If Herman Melville has stated facts, a frigate of this Republic deserves the epithet given it by sailors, “a hell afloat.” Mr. Melville does not despise discipline, or the means necessary to secure it, but he lays the axe at the root of the discipline enforced by the articles of war, and by the self-sufficient jealousies and spites of the officers. In our judgment he treats the whole matter not only like a man but like a philosopher. His opinion is worth that of a thousand interested witnesses.

We are glad that for once a gentleman and a scholar, who could appreciate and make allowance for all circumstances, and yet who had a soul to hate and a courage to expose abuses, found himself in the maintop of an American frigate. This work will accomplish good. We hope every one will peruse it. It appeals more to the judgment than to the feelings.—Hence its chief moral beauty, and, the safety with which it can be trusted. It can be had at TRACY’s, also at BEESLEY’s.

Posted by Scott Norsworthy at 7:44 AM No comments: 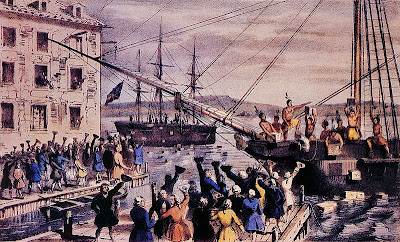 Celebrated in verse, known around Boston as the "last of the cocked hats," Herman Melville's paternal grandfather was also remembered as a famous fake Indian. Oliver Wendell Holmes said so in later commentary on The Last Leaf:

For corroboration see the following item, as reprinted in the New York Spectator from the Washington Daily National Journal:

Major Melville, who was reformed out of the office of Surveyor of the port of Boston, by Gen. Jackson, is said to be the only surviving revolutionary patriot who was engaged in the tea chest affair. This gentleman had signalized himself by his bravery and patriotism during the Revolution. It is said that when he was unceremoniously and causelessly thrown out of the little office he filled, he shed tears, not for the loss of the office, but at the ingratitude of his country. He had looked upon his appointment to the situation as a testimony of the respect in which his last services were held, and was contented with it, although it was humble. The “Hero of two wars,” in contempt of his revolutionary services, unfeelingly threw him out, in order to pay a partisan, and the majority in the Senate, obedient to the imperial mandate, confirmed the nomination of his successor. In the beautiful language of a Senator from Kentucky, “the fine enamel of their sensibilities could not be ruffled” by the cruelty of the act.—Nat. Jonr

Reprinted from the Bunker Hill Aurora in the Manchester, Vermont Horn of the Green Mountains on April 20, 1830. The Aurora disputed the claim, commenting that "Maj. Mellville is not the last of the Mohawks." 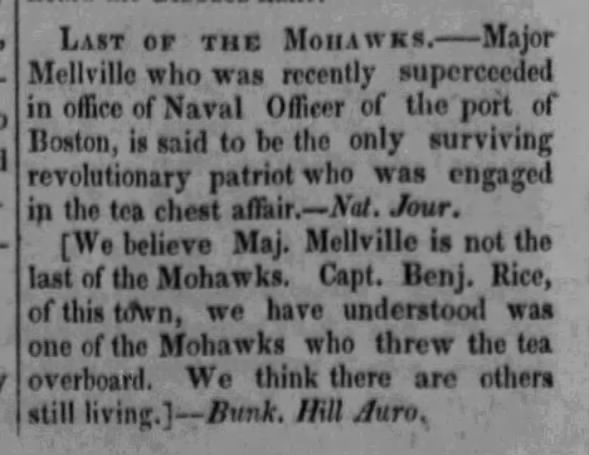 These published treatments of Thomas Melville as a fake Mohawk, a Mock-Mohawk, call to mind the dastardly Indian chief Mocmohoc in Herman Melville's 1857 book The Confidence-Man.

Who has noted that Mocmohoc = Mock Mohawk?


"the name of the treacherous Indian Mocmohoc can easily be seen as "mock mohawk" or "fake Indian."

Michael Rogin in Subversive Genealogy is alert to the irony and potential significance of Major Melville's assumed identity:


“As Mohawks or the conquerors of Mohawks, in the cause of American independence, the Gansevoort and Melvill grandfathers acquired heroic power”

Some years back I quoted Rogin in a message on The Confidence-Man to the Google group Ishmailites. Prompted by an earlier post from Clare Spark, I went on to offer a different way of reading the Mocmohoc episode as a kind of masquerade or upside-down allegory. Here it is again, cut and pasted:


Clare rightly places the “Indian-Hating” chapters in Melville’s Confidence-Man “among the most difficult chapters in a difficult book.” Her reading of the admittedly complex sequence as a critique of Rousseau, the Noble Savage, and associated notions of human goodness and divine benevolence seems plausible enough. More than a few readers take the whole Confidence-Man as a satire on American optimisms, and with good reason. Still, one has to wonder why Melville the deep thinker and gifted writer would take so much trouble merely to affirm a hackneyed Puritan stereotype of Indians as devils and thereby implicitly countenance the practical and historical annihilation of Native Americans with whom, as Clare also rightly allows, Melville on principle must have regarded sympathetically as brothers. The independent-minded and sensitive-souled writer does not, one hopes, so readily embrace commonplaces.

Let me here propose another level of meaning. Not the only level worth considering, obviously, but an important one that is consistent with Melville’s characteristic aesthetic and humanist values, and consistent also, as it turns out, with Clare’s perception of a satire on smooth optimism. Try this out. Perhaps the most atrocious incident of Indian savagery in the entire “Indian-Hating” section is the massacre perpetrated by a devilishly treacherous Indian chief named “Mocmohoc.” The tale is told in chapter 26 by a mysterious stranger (identified later on as Charles Arnold Noble) who has adopted the persona of James Hall, a real-life frontier celebrity in his own right. In brief, Mocmohoc invites his new friends the Wrights and Weavers over for a feast of barbecued bear and then slaughters them. This is too terrible. What monster could be more fiendish than the host who kills his confiding guests?

But who is this Mocmohoc? As others before now have noticed, the name “Mocmohoc” suggests a fake Indian, a Mock Mohawk. Who then are fake Mohawks? The rebellious colonists who dressed up like Indians during the famous “Boston Tea Party,” of whom Herman’s paternal grandfather Thomas Melvill made one. After the Party, ebullient Bostonians chanted “Rally Mohawks! Bring your axes, and tell King George we’ll pay no taxes,” according to Michael Paul Rogin in Subversive Geneaology (p49). Rogin goes on to observe, “As Mohawks or the conquerors of Mohawks, in the cause of American independence, the Gansevoort and Melvill grandfathers acquired heroic power” (49).

Yow! A key, and the bolt turns. The story always felt like allegory anyway, and so it is. In true allegorical fashion, something stands for something else. THIS means THAT. This Mocmohoc stands for those mock Mohawks the white English colonists and revolutionary founders of America. But the mistreated Wrights and Weavers, who are they? The Indians! Consider: the strange backstory of the five cousins allusively recalls the “Five Nations” and the Iroquois Confederacy. The word “covenant” as employed by Mocmohoc suggests the “Covenant Chain” or alliance between the Indians and English colonists. The “Albany Congress” convened in 1754 to repair the chain which Mohawk leader Hendrick had declared was broken in 1753. In the Confidence-Man it is the white prisoner of Mocmohoc who accuses him of breaking “covenant.”

In a larger view, Mocmohoc’s falsely offering to “bury the hatchet, smoke the pipe, and be friends forever” mirrors the long course of treaty making and treaty breaking pursued by the new American government. For a glimpse of Melville on the official mistreatment of Indians, we might go to Typee or, closer to home, the prairie as described in John Marr and Other Sailors:


“The remnant of Indians thereabout—all but exterminated in their recent and final war with regular white troops, a war waged by the Red Men for their native soil and natural rights, had been coerced into the occupancy of wilds not very far beyond the Mississippi...

Melville evidently likes to invert stereotypical attributes of Indians and Whites. He imputes the noblest motives to the Indians, using the noblest words and phrases. Indians are Men, fighting heroically to defend “their native soil and natural rights.” The motives that inspired the great revolutions of Europe and America, the motives that inspired Melville’s grandfathers, likewise inspired the Indians. The allegory of Mocmohoc similarly inverts the usual and expected associations. By way of Judge Hall and Charlie Noble, Melville gives us a remedial lesson in American History by turning it upside down, standing history (as told by the victors) on its head.

To get the true drift, you have to own the whiteness of Mocmohoc, and the Indian-ness of the Wrights and Weavers.  -- Ishmailites 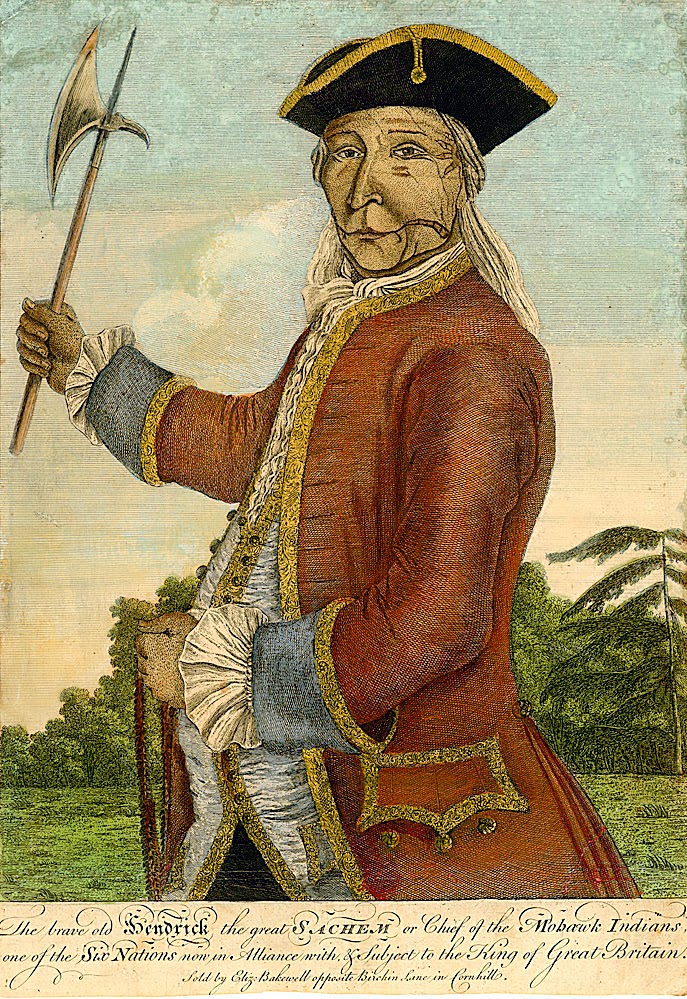 Posted by Scott Norsworthy at 11:58 PM No comments: 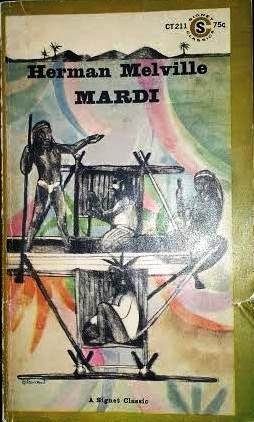 Posted by Scott Norsworthy at 7:08 AM No comments: