How to Write Like Herman Melville: Deliberate Practice for Writers

Posted by Scott Norsworthy at 2:01 PM No comments:

Posted by Scott Norsworthy at 1:51 PM No comments:

Van Morrison Whenever God Shines His Light On Me

Posted by Scott Norsworthy at 9:03 AM No comments:

The noblest and most promising attempt at scholarship in the March 2022 Leviathan is the essay by Elizabeth Adams on the likely influence of David's famous painting on the theatrical oath-taking scene in Moby-Dick, chapter 36.

... Melville's oath-taking vignette in "The Quarter-Deck"—a scene emphasized in Huston's film but otherwise overlooked by scholarship. I argue that this oath-taking scene proves a previously unnoted ekphrastic passage in which Melville draws from Jacques-Louis David's well-known Neoclassical history painting Oath of the Horatii (1784) in order to depict Ahab's induction of the three mates, and then the three harpooners, into his quest for revenge upon the white whale.

It's a great connection, here provoking an interesting take from Adams on Melville's "aesthetic of the distinct." Which to me does not easily or obviously reduce down to realism, but no matter. Once you see it, the painting wonderfully illuminates the Quarter-Deck scene in Moby-Dick. For a start. While worthy of closer examination, certainly, Melville's debt to David's Oath of the Horatii has not exactly been ignored or "unnoted" in previous scholarship. Indeed, a footnote in the 2nd Norton Critical Edition (listed without comment by Adams among Works Cited) concisely points to the painting and the medium in which Melville would most likely have encountered it:
2nd Norton Critical Edition (2002), ed. Hershel Parker and Harrison Hayford, page 141:

"Melville knew this ritual from Shakespeare (Hamlet makes Horatio and Marcellus swear on his sword in Hamlet, 1.5.146), but he could have seen it elsewhere, perhaps in a print of the 1784 painting, The Oath of the Horatii by Jacques Louis David (1748-1825).

"Melville knew an oath-taking ritual from Shakespeare (Hamlet makes Horatio and Marcellus swear on his sword in Hamlet, 1.5.146), but he could have seen it elsewhere, perhaps in a print of Jacques Louis David's 1784 painting, The Oath of the Horatii."

Unfortunately, Adams also has overlooked prior and directly relevant work by Peter Wagner on David's painting as exemplary "iconotext" in Moby-Dick. Engaging the highest priests of postmodern lit-crit AND the Melville Society, Wagner has written and published on David's famous painting and Melville's famous oath-taking scene in English:

In Herman Melville's mighty Moby-Dick, or, The Whale (1851), art and artists constantly interfere in the text--and so do the fictional readers or observers of art works... One of the more intriguing examples occurs when, in Chapter 36, Ahab first nails the golden doubloon to the mast, and then, as the English of Shakespeare and the Elizabethan revenge tragedy blends with the powerful prose of the Bible and Milton's lofty verse (and many other pre-texts), forces his crew to unite in an "indissoluble league." ... The scene is obviously inspired by two major pretexts (or subtexts), one verbal and the other visual: Shakespeare's Hamlet and Jacques Louis David's Le serment des Horaces (colour plate I). David's painting--and its highly ambiguous, contradictory, socio-political implications--are integrated into Melville's text. The dramatic scene relies for its meaning on the reading of David's canvas and all the sources behind it, including the classical story of the Horatius family...." (9-10)

"Let us now leave ekphrasis for a while and turn to the second provocative term, iconotext, which I applied to the implicit allusion to David's Le serment des Horaces in Chapter 36 of Moby-Dick." (15)

... footnote 39:  "... The study of the role of art works in Melville's novel is, as can be expected, still at the "correspondences of the arts" stage, with most critical works exploring text and paintings (evoked in the text) apart. See, for instance, Sten: Savage Eye, and Wallace: Melville and Turner, which are, alas, no exception to the rule." (15)

and German, a whole chapter on the subject in German:

Wagner credits Harold Beaver for being the first commentator to identify David's painting as the iconographic source for the oath-taking scene, citing the 1972 Penguin edition of Moby-Dick.

Wagner's use of the "implicit allusion" to The Oath of the Horatii in Moby-Dick to exemplify the term iconotext is quoted by Thomas F. Heck in the first chapter of Picturing Performance: The Iconography of the Performing Arts in Concept and Practice (University of Rochester Press, 1999) at page 37.

Here in the blogosphere, Charles Matthews called attention to David's painting in his discussion of Moby-Dick chapter 36, back in 2010:

Then he [Ahab] has the three mates extend their lances and "he grasped the three level, radiating lances at their crossed centre." He glances "intently from Starbuck to Stubb; from Stubb to Flask. It seemed as though, by some nameless, interior volition, he would fain have shocked them into the same fiery emotion accumulated within the Leyden jar of his own magnetic life." The image is somewhat reminiscent of Jacques-Louis David's painting Oath of the Horatii: 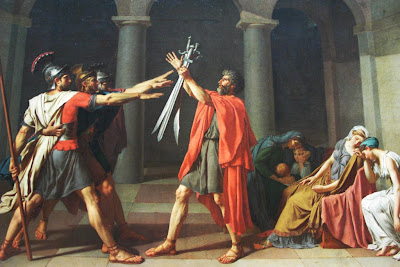 But the effect isn't what Ahab hopes for: "Stubb and Flask looked sideways from him; the honest eye of Starbuck fell downright." Ahab resigns himself that if they had taken "the full-forced shock, then mine own electric thing, that had perhaps expired from out me. Perhaps, too, it would have dropped ye dead." He orders the three mates to act as "cupbearers to my three pagan kinsmen there -- yon three most honorable gentlemen and noblemen, my valiant harpooneers." He has the harpooners detach the metal heads from their harpoons. "Forthwith, slowly going from one officer to the other, he brimmed the harpoon sockets with the fiery waters from the pewter." Each officer gives the harpoon-cups to his harpooner.

"Drink, ye harpooneers; drink and swear, ye men that man the deathful whaleboat's bow -- Death to Moby Dick! God hunt us all, if we do not hunt Moby Dick to his death!" The long, barbed steel goblets were lifted; and to cries and maledictions against the white whale, the spirits were simultaneously quaffed down with a hiss. Starbuck paled, and turned, and shivered.

It's a great, theatrical, melodramatic scene.

Posted by Scott Norsworthy at 10:55 AM No comments:

"These proclamations are an act of faith, in a new, as yet unnamed religion, and the vehemence with which one proclaims allegiance to these untruths is an exercise no different from any other ecstatic religious oath."

Posted by Scott Norsworthy at 12:09 PM No comments:

Posted by Scott Norsworthy at 9:20 AM No comments:

Merrily as a woodpecker

"But the artist, with a heart as callous as that of an army surgeon, continued his performance, enlivening his labours with a wild chant, tapping away the while as merrily as a woodpecker."

Posted by Scott Norsworthy at 5:32 AM No comments:

"With what rapture you behold, hovering over some vast hollow of the hills, or slowly drifting at an immense height over the far sunken Housatonic valley, some lordly eagle, who in unshared exaltation looks down equally upon plain and mountain." -- Chapter 1, Israel Potter (1854-5)
Posted by Scott Norsworthy at 12:20 PM No comments: