Hershel Parker makes great use of Harrison Hayford's work on the Hendricks House Omoo in the first volume of Herman Melville: A Biography.


"For separating fact from fiction in Omoo I rely primarily on the documents Hayford provided me (most of which he printed in the Hendricks House Omoo)...." --Herman Melville: A Biography

Likewise Mary K. Bercaw Edwards, in her introduction to the Penguin edition of Omoo, heartily commends the Hendricks House edition:

As the Penguin editor explains, "page proofs for the Hendricks House edition were completed in 1957, but the book was not published until 1969."

Despite generous citations by distinguished former students of Harrison Hayford, and by Canadian scholar Gordon Roper in the Northwestern-Newberry edition of Omoo, the classic Hendricks House edition of Melville's Omoo by Hayford and (did you know?) Walter Blair is not so well known as it should be.

Today's search at abebooks turns up just one ex-library copy at Easy Chair Books. I have one already so this one's yours. Another more expensive, and more tempting volume is the "excellent, collectible copy" offered for sale via Biblio by Rutter's Rarities. Inscribed by Harrison Hayford "to a fellow book rat." Yikes! It might be gone by the time you read this.

For now, here are two pages of Explanatory Notes from the copy I already own. Several of Hayford's notes pertain to the figure of Lem Hardy in Omoo.

The new Leviathan came stuffed with source studies, a kind of Christmas stocking in July. Don't miss the splendid essay by Robert J. O'Hara on Hood's "The Lee Shore" and Moby-Dick.

In the same June 2016 volume, Josie Madison identifies Thomas Sweeny as the former House of Refuge bad boy whom B. K. Peirce associated with Melville's South Sea romances in Appleton's Journal for March 18, 1871. I stumbled across that Melville reference in Appleton's years ago but never got anywhere, except for impulsively buying Peirce's 1869 book, A Half Century with Juvenile Delinquents. More wisely and profitably, Josie Madison consulted the Inmate Case Histories in the New York State Archives. Fascinating cat, this Sweeny--a sort of real-life Lem Hardy. Even so, there's no need to discount Melville's long known use of Langsdorff for the characterization of Lem Hardy (and the information "Hardy" provides about tattooing) in Omoo. 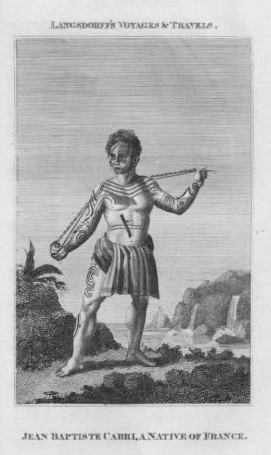 As observed in the Explanatory Notes for the classic Hendricks House edition of Omoo by Harrison Hayford and Walter Blair (page 355), "Melville had an eye on Langsdorff's full-page engraving of the well-tattooed Frenchman Jean Baptiste Cabri who lived among the Marquesans and gave Langsdorff the information that Lem Hardy purportedly gave Melville."

Let's look again. Yep, Jean Cabri as depicted in Lagsdorff's Voyages and Travels bears a forehead tattoo something like the triangular "blue shark" tattoo which Melville ascribes to Hardy. I can't see shark or fin on Sweeny's face as shown in the photograph posted on Ancestry.com in January 2016 by Douglas Rynkewicz. 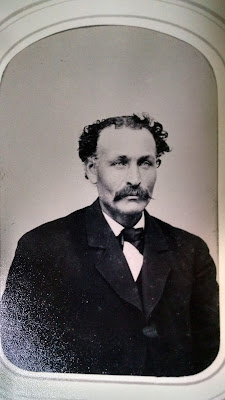 Possibly Sweeny was gone to New Zealand by the time Melville got to the Marquesas. I'm not yet clear on the documentary basis for this, but the "Facts" page of the Rynkewicz Family Tree at ancestry has him already in Akaroa by 1840. On the other hand, Melville could have read about Sweeny, spelled Sweeney, in a major New York newspaper like the New York Tribune, or the Evening Post. While writing Omoo even. The article below (reprinted from the Trenton Daily News) appeared in both papers on October 14, 1846.

AN INTERESTING LABORER.—There is a man, employed at the iron establishment of Mr. Cooper, in South Trenton, who has visited nearly every part of the world—has spent many years among the Indians of the Pacific Ocean—and speaks more Indian languages, probably, than any other man in the state.

Mr. Sweeney, for such is his name, is employed at the scales near the basin, where he weighs all the iron, coal, &c., which is received or sent away; and his business employs him so constantly, that he has little leisure for conversation. He is an American, and we believe was born in New York.

At the age of fifteen, he went to sea, and for sixteen years scarcely visited the United States. He was employed much of his time in the whale fishery among the Pacific islands, and his constant intercourse with the Indians, and his facility in acquiring languages, soon made him master of some thirty different Indian dialects.

At one time, in consequence of severe indisposition from scurvy and other causes, which threatened to prove fatal if he remained on ship-board, he was set ashore on the Marquesas Islands, and was there alone with the Indians between three and four years. Here he mingled with them on the same footing as a native born Indian, and arose, first to be the chief of his tribe, and then the chief of all the tribes in that group of islands, retaining his power and consequence up to the time of his departure.

At this time his arms, legs and body are covered with the tattoos which are customary in the Pacific groups, and their color, he informs us, has not changed a particle since the day that this painful operation was performed, which is now some seven or eight years.

Mr. Sweeney is a steady, industrious man, and has a wife, an English woman, we believe, whom he married in the Pacific. One of his daughters still remains in some of the Pacific Islands, but the rest of his family are with him. He is about thirty-four years of age.—[Trenton Daily News.

The same article in the New York Tribune, October 14, 1846 can be seen at the Library of Congress site, Chronicling America. Fulton History has the same item in the Morning Courier and New York Enquirer for Saturday, October 17, 1846. Also reprinted in the Schenectady Cabinet on November 3, 1846.

On September 23, 1843 the New Zealand Gazette and Wellington Spectator announced Sweeny's marriage on September 13th to Mary Anne Furminger. In October of 1843 he shows up in court proceedings as a constable for Akaroa.

In 1863 Sweeny was there when Capt. Williams came to town with his traveling exhibition:

Capt. Thomas Sweeney, of this city, an old whaleman, and for many years a resident of the Marquesas, and other cannibal islands in the South Pacific, where he received the highest honors that these savage tribes could confer, will be present at Capt. Williams’ exhibition during this and the other evenings of this week. Capt. Sweeney is thoroughly conversant with the language, manners and customs of the South Sea Islanders. He is tattooed in the highest style of savage art, as a mark of honor and rank. He will describe this operation, and relate many interesting incidents of his adventurous life. This will add a very interesting feature to the stirring and fascinating entertainment of Capt. Williams, which continues to draw crowded houses. --Trenton State Gazette, May 14, 1863

The "Nautical Entertainment" by Williams presented


a lively and vividly interesting description of the enterprise, energy, and perils of the whalemen, the whole illustrated by a splendid panorama of a south-sea voyage, and a practical exemplification of the method of taking whales; a regular whale boat, with crew, harpoons, lances, &c., being brought on the stage and handled in the regular manner. --Trenton State Gazette, May 6, 1863


“A wonderful entertainment—we can give no higher praise than to say that Herman Melville and J. Ross Brown’s whaling scenes, seemed actually to be carried on before the eyes of the spectators, down to the intense whispers of the commander and the extravagant tactics displayed during the fury of the combat” --Boston Journal, as quoted in the Schenectady Evening Star and Times, Thursday, December 3, 1863

Getting back to Thomas Sweeny in New Jersey, another Trenton item briefly describes his 1854 appearance before the local Philosophical Society, meeting in the Library Room:


Towards the conclusion of the meeting it was mentioned that Thomas Sweeny, who had spent the greater part of his life on the Pacific, and who for some years had been ruler in the Marquesas islands was present by invitation, and would give such information as the society might desire respecting the islands of the Pacific and the whale fisheries. Various questions were answered—The appearance of the natives, their customs, cannibalism, tattooing, and whale fishing occupied the remainder of the evening. That the old chief had been in strange company his elaborably tattooed arm and legs bore witness. These dermoid inscriptions relate to the achievements and honors of the individual who bears them.

After an expression of thanks to Mr. Sweeny for his rare and highly interesting narratives, and a request, that at another time he may continue them, the Society adjourned. --Trenton [New Jersey] State Gazette, Thursday, May 18, 1854

After Sweeny's death on May 5, 1879, the Trenton State Gazette excerpted much of the old "Daily News" report from 1846, as follows:


THE DEATH OF A REMARKABLE MAN.—

Yesterday morning it was announced in Chambersburg that Capt. Thos. Sweeny, an old resident of this city, had died. In the “Daily News” of October 7, 1846, we find a very interesting account of Captain Sweeny. He was at that time employed at the rolling mill as weighmaster, and the article in the “News” says: “He has spent many years among the Indians of the Pacific Ocean, and speaks more Indian languages than any other man in the State. At the age of fifteen years he went to sea, and for sixteen years scarcely visited the United States. He was employed much of his time in the whale fisheries among the Pacific Islands, and his constant intercourse with the Indians and his facility for acquiring language soon made him master of thirty different Indian dialects. At one time from severe indisposition from scurvy and other causes, which threatened to prove fatal if he remained on shipboard, he was set ashore on the Marquesas Islands, and was there alone with the Indians for four years.


“Here he mingled with them on the same footing as a native born Indian, and arose, first, to be the chief of his tribe, and then chief of all the tribes in that group of islands, retaining his power and consequence up to the time of his departure.

“At this time his arms, legs and body were covered with the tattoos which are customary in the Pacific groups, and their color, he informs us, has not changed a particle since the day that this painful operation was performed, which is now some seven or eight years.”

Mr. Sweeny married an English lady in the Pacific islands, and had one daughter living there, the remainder of his family moving to this city with him. --Trenton State Gazette, Tuesday, May 6, 1879.