Chilton manuscript of A Visit from St Nicholas

The four known autograph versions listed above are the same ones cited by Seth Kaller in his online article on The Authorship of The Night Before Christmas:


“A Visit” was first printed with Moore’s name in 1837 and, in 1844, Moore himself publicly acknowledged authorship when he included the piece in a compilation of his poetry. That same year, he corrected Holley’s reprint of the poem. Over the next two decades, Moore penned four autograph versions of “The Night Before Christmas,” in 1853 (now in the Strong Museum), 1856 (the Huntington Library), 1860 (the Kaller copy) and 1862 (New-York Historical Society). Each manuscript is unquestionably authentic.  -- Seth Kaller, The Authorship of The Night Before Christmas  <https://www.sethkaller.com/about/educational/tnbc-2/>

Not included in Kaller's list of extant manuscripts with "A Visit from St. Nicholas" in the handwriting of Clement C. Moore is the copy associated with Robert S. Chilton (1822-1911).


A portion of Clement C. Moore's "A Visit from St. Nicholas" in manuscript appeared in the January 1875 issue of St. Nicholas, a monthly magazine for children. The image shown above is from the 1875 volume in my personal collection. Fortunately, the reproduction and the short article that accompanies it can be found via Google Books in digitized volumes of St. Nicholas.

I'm not sure how to understand the word original in the 1875 claim for this document as Moore's "original manuscript of these famous verses." It's probably not Moore's first draft of the Christmas poem, c. 1822. Nonetheless, as shown in facsimile the manuscript certainly looks authentic and could be relatively early. The characters are neatly and strongly formed, evidently not with the older and shakier hand that wrote the 1862 copy for the New-York Historical Society. As far as I can tell from reproductions, none of the other four versions in manuscript has letters with extra-long descenders as here, for example the "n" in "nestled"; the "m" in "matter" and "moon"; and the "s" in "snug" and "snow."

"A VISIT FROM ST. NICHOLAS."

If any of us should happen to have an old friend whom we had never seen, we would be delighted to have his photograph, that we might know exactly how he looked.

On the opposite page is the likeness of an old friend—certainly an old friend to most of us. It is a fac-simile, or exact imitation, of the original manuscript of that familiar poem which is now as much a part of Christmas as the Christmas-tree or the roast turkey and mince-pies. No matter who writes poetry for the holidays, nor how new or popular the author of such poems may be, nearly everybody reads or repeats "'Twas the night before Christmas " when the holidays come round; and it is printed and published in all sorts of forms and styles, so that the new poems must stand aside when it is the season for this dear old friend.

Just think of it! Jolly old St. Nicholas, with his sleigh and his reindeer and his bags full of all sorts of good things, made his first appearance to many of us in this poem. Until we had heard or read this, we didn't know much about him, except that on Christmas Eve he shuffled down the chimney somehow, and filled our stockings.

Now here is a part of the poem,—as much as our page will hold,—exactly as the author, Mr. Clement C. Moore, wrote it. Here we see just how he dotted his i's and crossed his t's, and how he wrote some of his lines a little crookedly.

If we knew nothing about Mr. Moore but what we read in the biographical notices that have been written of him, we would never suppose that he troubled his brain about St. Nicholas and his merry doings, or thought of such things as reindeer and sleighs and wild gallops over house-tops. For he was a very able and learned man. He was the son of Bishop Benjamin Moore, and was born in New York, July 15, 1779. He was graduated at Columbia College (of which his father was at one time president). He was a fine Hebrew scholar, and published a Hebrew and English Lexicon and a Hebrew grammar. He was afterward Professor of Hebrew and Greek literature in the Protestant Episcopal Seminary in New York. He was a man of property, and had something of the St. Nicholas disposition in him, for he gave to this seminary the plot of ground on which its buildings now stand. Mr. Moore wrote many poems, which were collected and published in a book in 1844, and he did other good literary work; but he never wrote anything that will keep his memory green so long as that delightful poem on the opposite page.

The original manuscript of these famous verses is in the possession of the Hon. R. S. Chilton, United States Consul to Clifton, Canada, whose father was a personal friend of Mr. Moore, and who very kindly allowed us to make this fac-simile copy of a page of the manuscript for St. Nicholas. 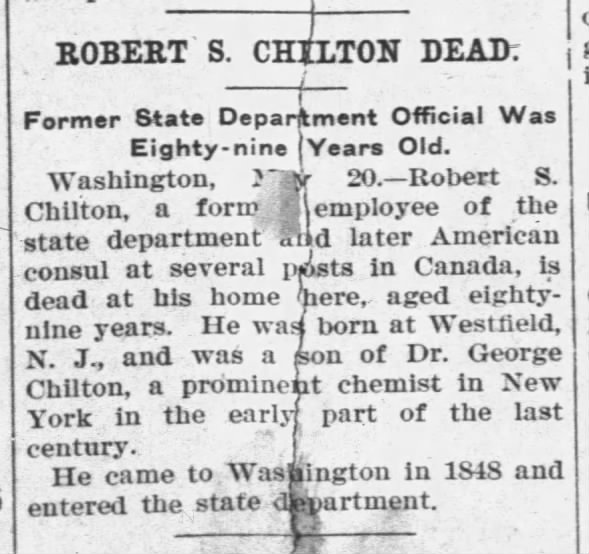 Sat, May 20, 1911 – 3 · Daily Long Island Democrat (Jamaica, New York) · Newspapers.com
A 1911 obituary of U. S. Consul Robert S. Chilton identifies his father as "Dr. George Chilton, a prominent chemist in New York in the early part of the last century." The 1875 St Nicholas magazine (quoted above) refers to this elder Chilton as a "personal friend" of Clement C. Moore.


In 1823, Moore's friend George Chilton (1768-1836) was commended in a New York newspaper as "that able and practical Chemist, and Natural Philosopher" (National Advocate, January 7, 1823). Back in 1800, when newly arrived "from London," G. Chilton advertised lectures on Astronomy and Geography, "and other interesting branches of Natural Philosophy." For a character reference the lecturer supplied the prestigious name of Samuel L. Mitchill, Professor of Chemistry at Columbia. Chilton's lectures were illustrated through "Artificial Representation" which meant that Chilton used a planetarium consisting of "the Globes--the Orrery, and a variety of Mechanical contrivances, calculated to make Science familiar." In October 1800 Chilton announced the reopening of his Academy at 68 William Street, specifically "for young Ladies." A few years later he gave "Lectures on Natural Philosophy, Chemistry, &c." for ladies, mostly, "at his house, No. 34, Cedar-street, near the City Hotel."
As an all-knowing bachelor-poet, Clement C. Moore addressed female students of Chilton in a poem titled "Lines addressed to the young ladies who attended Mr. Chilton's lectures in Natural Philosophy, Anno 1804-5." Moore's poem (short title: "Mr. Chilton's Lectures") is one of several that appeared over the signature "L." in A new translation with notes of the Third Satire of Juvenal (New York, 1806). Many years later, Mr. Chilton's Lectures was included in the 1844 volume, Poems by Clement C. Moore.

For more about George Chilton, see the obituary in The American Journal of Science Volume 31 (January 1837), largely based on the memorial article signed "J. T." in the New York American of November 17, 1836.

What happened to Robert S. Chilton's manuscript of "A Visit from St Nicholas"? Wherever it is now, the alleged provenance seems entirely credible in view of Moore's early ties to RSC's father George Chilton as lecturer on Astronomy and Natural Philosophy.

For comparison, here is the first page of Moore's poem from the manuscript facsimile that former owners Mr. and Mrs. William Keeney Bixby shared with friends as a holiday greeting. Image credit: The Huntington Library, San Marino, California.

As part of their unique holiday gift the Bixby's also transcribed and printed a March 1856 note from Clement C. Moore to an unidentified male correspondent, evidently sent by Moore along with the manuscript version of "A Visit from St. Nicholas." Characteristically, Moore wished his famous nursery rhyme "was more worthy of attention."

I have received your letter of the 16th instant. I wish the inclosed was more worthy of attention.

Accept my thanks for your kind wishes; but a man who is nearer to 77 than to 76 has no right to expect many more years of life.

Posted by Scott Norsworthy at 2:06 PM