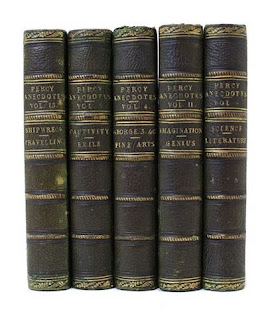 It's there on the first page of the 1837 Catalogue of Books in the Library of the Young Men's Association of the City of Albany:

without however any further identifying information as to volume number. Percy Anecdotes appeared in a series of volumes, No. 15 of which in the 20-volume London edition features anecdotes of

I'm guessing the Albany Library catalog also listed one or more of these volumes, let's check. Yes, ten volumes! No details about contents are given, but see there on page 59:

Percy? One expert (the Mad Librarian?) at Rooke Books names names of the real compilers:


"Supposedly written by Sholto and Reuben Percy, brothers of the Benedictine monastery of Mount Benger the Anecdotes are in fact penned by Sir John Byerley and Thomas Byerley"

Sir John Byerly was Sholto? No, another description by the same shop indicates that

Other way around, according to the Dictionary of National Biography: "Reuben Percy was Thomas Byerley, and Sholto Percy was Joseph Clinton Robertson, who died in 1852." Hmmm. As for the title,


The name of the collection of anecdotes was taken, not from the popularity of the 'Percy Reliques,' but from the Percy coffee-house in Rathbone Place, where Byerley and Robertson were accustomed to talk over their joint work.  --1886 DNB

What a treasure trove for any reader, especially one who also writes, and more especially Melville with his notoriously allusive style and characteristic pose (as I read somewhere) of universal learning. If you encountered this, say in Albany or anywhere...

The celebrated Tasso and his friend Manso, with Scipio Belprato, Manso's brother-in-law, were one day in a summer-house which commanded a full prospect of the sea, agitated at the moment by a furious storm. Belprato observed,"that he was astonished at the rashness and folly of men who would expose themselves to the rage of so merciless an element, where such numbers had suffered shipwreck." "And yet," said Tasso, "we every night go without fear to bed,where so many die every hour. Believe me, death will find us in all parts; and those places that appear the least exposed are not always the most secure from his attacks." —An Italian version of an old fable, but not on that account the less apposite. --The Percy Anecdotes, vol 15

you might be at your writing desk in Pittsfield, Mass. and come up with this:


But why say more? All men live enveloped in whale-lines. All are born with halters round their necks; but it is only when caught in the swift, sudden turn of death, that mortals realize the silent, subtle, ever-present perils of life. And if you be a philosopher, though seated in the whale-boat, you would not at heart feel one whit more of terror, than though seated before your evening fire with a poker, and not a harpoon, by your side.
--Moby-Dick, The Line

The Percy Anecdotes, Volume 15 in the 1826 Cumberland edition at Hathi Trust, digitized from the volume at Princeton:

Links to the Harper Revised American edition in one volume:

--1847 Harper & Brothers Revised edition at NYPL
Posted by Scott Norsworthy at 8:43 AM No comments:

Another year is about gone since the 2014 Memorial Day post on Corps Commander Winfield Scott Hancock. Since then I've looked at some of the many Civil War era images available online in the Library of Congress Prints and Photographs Division. Above, this Currier and Ives print visually reinforces the main point of that earlier post (Hancock not Grant is the "Corps Commander" of Melville's poem in Battle-Pieces), illustrating Hancock's popular credit for leading what Melville in On the Photograph of a Corps Commander calls "Spottsylvania's charge to victory."

Ay, man is manly. Here you see
The warrior-carriage of the head,
And brave dilation of the frame;
And lighting all, the soul that led
In Spottsylvania's charge to victory,
Which justifies his fame.

--On the Photograph of a Corps Commander, first stanza

The full caption of the Currier and Ives print reads:

At the Battle near Spottsylvania Court House Va., May 12th 1864.

At midnight Gen’l Hancock changed his position on the extreme right to the left; and at daylight attacked with his accustomed impetuosity, forcing the first, and then the second line of the Rebel works, capturing the whole of Johnson’s Division and part of Early’s, together with Maj. Gen’l E. Johnson, Gen’l. Geo. H. Stewart, and prisoners by the thousands.

The Currier & Ives "Circular for Trade Only" reproduced at The Philadelphia Print Shop lists "Hancock's Charge at Spottsylvania" and "Gen. Hancock on Horseback" among new and current PRINTS FOR THE CAMPAIGN, available wholesale at $6 per 100.

Posted by Scott Norsworthy at 10:58 AM No comments: