1855 Lilies and Violets, endorsed by Melville 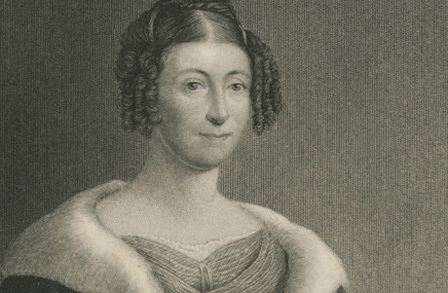 From the publisher's advertisement of J. C. Derby for Lilies and Violets ("A New Book For Young Ladies") in the New York Evening Post, Wednesday, December 27, 1854


"I cannot but think your design a happy one—the title is highly pleasing." —[Herman Melville.


The authoress has received the following testimonials and recommendations of “Lilies and Violets”:

“The volume that you propose to bring before the public, it strikes me, will fill an unoccupied space in our literature, and commends itself highly to the judgment and taste of those for whom it is intended.”—[Miss Anne C. Lynch.
“I can conceive of no more charming volume.”—[T. Buchanan Read.
“I am certain that under your able guidance, the work needs no second advocate.”—[Fitz-Greene Halleck.
“I feel an interest in your beautiful literary design, of which I give proof by the inclosed poem.”—[L. H. Sigourney.

"I cannot but think your design a happy one—the title is highly pleasing." —[Herman Melville.

Even so brief and seemingly non-committal a comment by Melville has potentially significant implications. For one thing, when ever did any publisher quote Herman Melville's opinion of a new book? And however little the testimonial provides evidence of two letters or communications in Melville's lost correspondence, one from editor "Rosalie Bell" (pseudonym? and whose?) or somebody at Derby soliciting support for the project, and the one from Melville in reply that is selectively quoted in the advertisement.
Like Melville, Lydia Sigourney praised the "design" of the proposed anthology. Sigourney liked the design so well she sent along a contribution of her own for inclusion: "Death of a Young Maiden" (p. 319), presumably.
Melville did not contribute, unless he wrote one of those sketches or poems in the volume attributed to "Anonymous." Something to look into on a rainy day! For now I would guess Melville picked up some ideas and hints in Lilies and Violets that we find eventually developed in the Weeds and Wildings manuscript, in flower poems like "A Ground-Vine Intercedes with the Queen of Flowers for the Merited Recognition of Clover" and "The Devotion of the Flowers to Their Lady."
Lilies and Violets was later republished or pirated in 1864 by J. E. Potter under a different title, The Young Lady's Own Book, with credit now going to a different editor, "Emily Thornwell."
Update:
Review of LILIES AND VIOLETS in the
Salem [Massachusetts] Register, Thursday, December 28, 1854:


This is a beautiful volume, admirably adapted for a gift book, containing selections, in prose and verse, from many favorite writers. The selections are classified, and arranged under the heads Esthetic, Intellectual, Affectional, Devotional, and Domestic. The vignette title page is an elegant specimen of art, and the little embellishments interspersed through the volume are remarkably tasteful and well executed. Miss Anne C. Lynch, the poetess, expresses the opinion that this book will fill an unoccupied space in our literature, and commends itself highly to the judgment and taste of those for whom it is intended. Mrs. Sigourney furnished a poem for what she calls “this beautiful literary design.” — Fitz Greene Halleck, Melville, Reed, and many others of our distinguished authors, have also expressed their warm approbation of the work, and have aided the compiler essentially by their advice and contributions. So many gems, from native and foreign writers, set in a style of such simple elegance, can not fail to prove unusually attractive. The volume must be placed in the choicest catalogue.

Update2:
The Derby advertisement with Melville's endorsement of Lilies and Violets also appeared in the New York Tribune, Saturday, December 23, 1854; and on the same day in the New York Times. "Published This Day" according to the ad, timed to tempt holiday shoppers with a traditional gift-book. 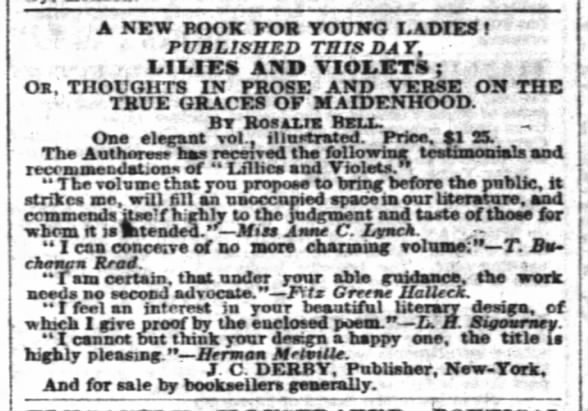 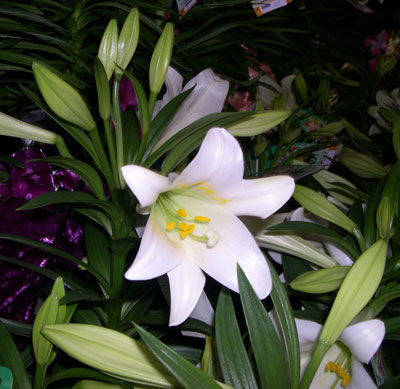 Posted by Scott Norsworthy at 2:52 PM No comments: