"After the Pleasure Party" and Hogarth's Madhouse

"And kept I long heaven's watch for this,
Contemning love, for this, even this?
O terrace chill in Northern air,
O reaching ranging tube I placed
Against yon skies, and fable chased
Till, fool, I hailed for sister there
Starred Cassiopea in Golden Chair.
In dream I throned me, nor I saw
In cell the idiot crowned with straw."

--from the poem After the Pleasure Party by Herman Melville

Repressing her romantic and sexual urges, Melville's passionate astronomer Urania makes herself crazy. Eventually she recognizes her own self delusion, though she does not welcome the truth and will even regret the hard, irreversible experience of disillusionment. In the stanza from the poem "After the Pleasure Party" (first published in the 1891 volume Timoleon) quoted above, the figure of the constellation "Cassiopea in Golden Chair" represents the speaker's obsessive pursuit of astronomy as a grandiose hallucination or "dream" of scientific glory. As Urania now recognizes, the intellectual lure of astronomy kept her from seeing the imprisoned lunatic she herself was becoming.  Cassiopea symbolizes Urania's exalted, stellar vision of herself as royalty, while the "idiot crowned with straw" represents her actual state of self-imposed isolation and mental instability.

Melville's images of astronomy and mental illness in "After the Pleasure Party" strikingly correspond to particular images in William Hogarth's The Madhouse, the eighth and last painting in the series A Rake's Progress.


"The eight paintings in William Hogarth's A Rake's Progress (1733) tell the story of Tom Rakewell, a young man who follows a path of vice and self-destruction after inheriting a fortune from his miserly father. It was Hogarth's second 'modern moral subject', and followed the hugely successful A Harlot's Progress (1730).

The series is principally known through the engravings made by Hogarth from his paintings in 1735." --Sir John Soane's Museum 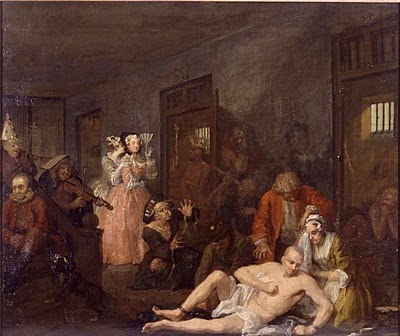 Also as described at the great Soane Muesum website, inmates of Hogarth's madhouse

"include a tailor, a musician, an astronomer and an archbishop. In the door to one of the cells is a man who thinks he is a king - he is naked and carries a straw crown and sceptre.


Like the real Bedlam, Hogarth's Madhouse is open to the public. Two fashionable ladies have come to observe the poor suffering lunatics as one of the sights of the town."  --Soane Muesum


"In the hospital science has claimed two victims. The fellow peering at the ceiling through a roll of paper which he imagines to be a telescope is an astronomer. Behind him the fellow who has drawn the ship, mortar and shot, earth, moon and various geometric patterns is attempting to discover a scheme for calculating longitude."
--Darvill's Rare Prints

Like Melville's Urania, Hogarth's deluded astronomer is not able to see the ludicrous figure in the cell who wears a straw crown and has, again like Urania, proudly throned himself. In manuscript versions of "After the Pleasure Party," discarded alternatives for "idiot" included "mad one"; "elated mad one"; and "loon." (As shown in editorial notes for the Northwestern-Newberry edition of Melville's Published Poems, pages 773-4.)

The moral message or "tendency" that Rev. John Trusler finds in Hogarth's Madhouse portraits gets remarkably near to the meaning of Melville's figures of the astronomer's telescope and crowned lunatic in "After the Pleasure Party":


By these expressive figures we are given to understand that such is the misfortune of man, that while, perhaps, the aspiring soul is pursuing some lofty and elevated conception, soaring to an uncommon pitch, and teeming with some grand discovery, the ferment often proves too strong for the feeble brain to support, and lays the whole magazine of notions and images in wild confusion. --Works of William Hogarth (London, 1833)


"...a folio volume of Hogarth lay open, with a cocoa-nut shell of some musty preparation capsized among the miscellaneous furniture of the Rake's apartment, where that inconsiderate young gentleman is being measured for a coat."  --Omoo

In Moby-Dick, Melville through Ishmael humorously criticizes the sea monster in Hogarth's Perseus Descending as one of many bad monstrous pictures of whales.

Later: Melville's Wellingborough Redburn owns an "old quarto Hogarth." And in White-Jacket, chapter 90 opens with an elaborate appreciation of the fifth plate from Hogarth's Industry and Idleness series:


"The gallows and the sea refuse nothing," is a very old sea saying; and, among all the wondrous prints of Hogarth, there is none remaining more true at the present day than that dramatic boat-scene, where after consorting with harlots and gambling on tomb-stones, the Idle Apprentice, with the villainous low forehead, is at last represented as being pushed off to sea, with a ship and a gallows in the distance. But Hogarth should have converted the ship's masts themselves into Tyburn-trees, and thus, with the ocean for a background, closed the career of his hero. It would then have had all the dramatic force of the opera of Don Juan, who, after running his impious courses, is swept from our sight in a tornado of devils.  --White-Jacket, The Manning of Navies

Fakes, Lies, and Forgeries Exhibit at the George Peabody Library - In The News

Baltimore fans of The Confidence-Man will love this. Exhibit opens Sunday at 3pm which now looks like bad timing since the Orioles game at Detroit starts right about then. Fortunately the show runs through Sunday, February 1, 2015:

Fakes, Lies, and Forgeries Exhibit at the George Peabody Library - In The News
Posted by Scott Norsworthy at 3:14 PM 2 comments:

"...the desire of my heart has been to see my husband’s books resurrected, as it were, to call forth as they have begun to do, the recognition which their birthright might reasonably claim."  --Elizabeth Shaw Melville

In The Early Lives of Melville, Merton M. Sealts, Jr. highlighted contributions to Melville biography by Arthur Griffin Stedman, among others. Sealts acknowledged the crucial role of Melville's wife in republishing Typee, Omoo, White-Jacket, and Moby-Dick:


And Sealts recognized additional "examples of Mrs. Melville's realization of every new opportunity to keep her husband's name and fame before a larger audience" such as her supplying "a previously unpublished portrait of Melville for use in the Century Magazine" and assisting her friend Harriette M. Plunkett with materials for Plunkett's article in the Springfield, Massachusetts Sunday Republican (July 1, 1900).

The chapter in Early Lives on "Family Reminiscences" transcribed Elizabeth Shaw Melville's notebook memoranda, but Sealts did not consider her independently of Stedman in the chapter on "Biographers of the Nineties."

With proper credit to Sealts and also the 1969 doctoral dissertation on Elizabeth Shaw Melville by Amy Elizabeth Puett, Kathleen E. Kier supplements and to some extent counterbalances the history of early biographies by focusing on the gracious agency of Melville's "sharp-witted" and "stoic" wife.


My focus here is on Elizabeth, and my purpose is to establish that she herself provided the principal impetus behind the crusade, though she was well aware that a professional man of letters would have to handle the particulars.

Lizzie’s correspondence reveals that even near the end of her life this sharp-witted lady’s first priority was re-establishing Melville’s stature in the literary world.


When Arthur’s personal problems become overwhelming, Lizzie gently lets him off the hook, excusing his absence from her life: “I can understand—as perhaps few can so well, the absorption of a busy literary man.” This last statement, in light of current discussion of the problematic nature of the Melville marriage, says a great deal about the gentle, stoic Elizabeth and her relations with her husband. Whatever storms their fragile marriage had earlier encountered, they were over at the end and mattered little, if at all, to her. That a woman involved for over forty years in the intense and complicated business of writing and publishing books should choose to continue the struggle after her husband’s death, when she might have been grateful for respite, should silence those who have questioned her spirit or her wisdom relating to Melville’s works. --Kathleen E. Kier, Melville Society Extracts 45, page 8 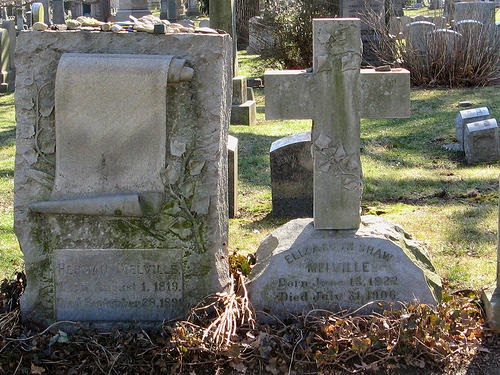 Posted by Scott Norsworthy at 10:26 AM 2 comments: