From the New York Commercial Advertiser, March 21, 1823; found in the New York Newspaper Archives at GenealogyBank:

FOR THE COMMERCIAL ADVERTISER.

ADIEU TO MY LYRE.

Adieu to thee, my lonely lyre!
Adieu the melody of song,
That echo'd from thy strings of fire
When swept the bard thy chords along!
Adieu to thee!--adieu to thee!
This is thy last and lonely lay,
And hope hath not a joy for me,
Now that the strain is hush'd for aye!

I hang thee on the willow tree
Whose branches kiss the murm'ring stream;
And morn's bright sun may shed on thee
Her wand'ring tints and wizard beam.
The zephyr's wings--the zephyr's wings
May frolic o'er thy chords in vain;
But never o'er thy sounding strings
The minstrel's hand shall sweep again!

But, ah, if e'er thy broken strings
The wand'ring minstrel's eye arrest,
Then may some sprite, with viewless wings,
Bear this sad burthen to his breast:--
"He lov'd the lyre--he lov'd the lyre,
"Whose broken strings neglected lie;
"And, O, it was his fond desire
"Beside his cherish'd lyre to die!"

"He often woke in former day
"The midnight song in lonely glade;
"And often pli'd, when morn was grey,
"The pleas'd and plaintive serenade.
"But never more--ah, never more
"The bard shall wake the midnight strain,
"Or, like the lark, in transport pour
"His early morning hymn again!"

"Upon the lone and willow tree
"Neglected hangs his broken lyre;
"Tho' fond to hallow'd memory,
"He deem'd its sounding strings of fire.
"He dropp'd the tear--he dropp'd the tear,
"And looked toward the heaven of blue--
"The lonely hour he swept with fear
"To his lost lyre, his long adieu!"

From the memorial article "John Rudoloph Sutermeister" signed "C." in The New York Mirror for September 1, 1827:


It was also about this period, that he commenced the publication of his early pieces in the “Northern Whig,” published at Hudson, with the signature of “R.” This was the same print in which Mr. James G. Brooks gave to the public the first happy numbers of “Florio;” and many of the effusions of “R.” bore a good comparison with those finished pictures which the genius of the former gentleman often furnished for its columns.

As observed last year in the post on Cadillacs and ragged Fords, one dirty job of scholarship on poems by Henry Livingston, Jr. would be

This item will help, at least with respect to identifying the author of poems signed "R." in the early 1820's. According to "C." in The New York Mirror for September 1, 1827, John Rudolph Sutermeister (1803-1826) published poetry over the signature of "R" (for Rudolph?) in New York newspapers, specifically the Hudson Northern Whig and the New York Commercial Advertiser. Hudson is about forty miles north of Poughkeepsie where Henry Livingston, Jr. is thought to have submitted a few pieces of poetry and prose over the same initial, "R." Most of the work submitted by "R." and attributed to Livingston was published in the previous century, before Sutermeister was born.


JOHN RUDOLPH SUTERMEISTER, to whose virtues and merit this faint tribute of affectionate remembrance is recorded, was born in the island of Curracoa, in the West-Indies, to which place his father, John Henry Sutermeister, Esq. removed, it is believed, from Geneva in Switzerland, his native residence.—A few of the first years of his life were spent in the West-Indies; and at the age of eight years, his father emigrated with all his family to America. After a brief residence in New-York, they removed to Rhinebeck, Dutchess county. He was there placed in the family of the Rev. Dr. Quitman, of the Lutheran church, where, at an early age, he commenced the study of the languages.

With a view of settling some affairs relative to his estates in the West-Indies, which were very considerable, his father returned with all his family, save young Sutermeister, to Curracoa; and during that time, while yet under the care of the Rev. Dr. Quitman, he was sent to the seminary at Cooperstown, then under the supervision and charge, as the writer believes, of that exalted scholar, the Rev. Ernest Lewis Hazelius. Here he devoted himself closely to his studies, and remained for some years.

His situation, at this time, was strikingly peculiar. In a foreign and a strange land—without one relative in America—attending a seminary of learning, where, on account of his retiring disposition, he formed few acquaintances;—and, at an age when all our emotions, whether of joy or sorrow, are the most pungent, although not the most lasting. And the circumstances with which he here found himself surrounded, were of all others the most calculated to inspire the latter sensation. It was at this place, toward the close of his stay, that he first tuned his youthful lyre, by his own midnight lamp. It was here, in his wanderings on the romantic banks of the beautiful Otsego, amidst the striking scenes so truly and happily described in the “Pioneers,” that his early fancy went forth upon glittering and buoyant wing, to cull the flowers of pure and holy thoughts, in the quiet and peaceful haunts of nature. With a mind acutely open to all its beauties, to use his own beautiful and expressive language

“He woke his lyre on midnight's ear—
“And o'er its chords his fingers strayed,
“Till passing sorrow paused to hear
“The rapt and plaintive serenade "

—often did his young but eloquent spirit weave his musings into song, which would have done the highest honour to maturer years; and to which thousands who would essay to commune with Apollo, may never attain.

During eight or nine years which his father spent in the West-Indies, (and in which time it is believed his mother died,) young Sutermeister was pursuing his studies, alternately at Rhinebeck, and Hartwick Seminary, in Otsego county. When his bereaved father returned to Rhinebeck with his remaining family, young Mr. S. commenced the study of the law, in the office of Francis A. Livingston, Esq. of that village. It was also about this period, that he commenced the publication of his early pieces in the “Northern Whig,” published at Hudson, with the signature of “R.” This was the same print in which Mr. James G. Brooks gave to the public the first happy numbers of “Florio;” and many of the effusions of “R.” bore a good comparison with those finished pictures which the genius of the former gentleman often furnished for its columns. About a year after this time, several pieces made their appearance in the “Commercial Advertiser,” and other New-York evening papers, with the same signature. They all bore the impress of high and lofty genius, mingled with a soft and touching melancholy and pensiveness, which, did it not belong to his early history in some wise, and other circumstances which occurred about this period, might be thought to have been added with the idea of producing effect to his compositions. Soon after, while prosecuting his studies, he began a correspondence with the “New-York Evening Post.” To the reader of that admirable paper, with his own name, he has given many a line of true poetic inspiration. From these and others, in a subsequent review, we purpose making a few extracts. Who has not felt a sadder throb at his heart, while reading his beautiful and pathetic “Lament,” or “Faded Hours ?” They are the genuine “sparklings of Helicon,” breathing in elegant, yet melancholy numbers, the sweetness of a harp, whose notes will be long remembered.

Early in the spring of 1824, he was admitted to practice at the bar of this state—and about which time his father removed to an estate near Kingston, Ulster county. At that period he visited the city of New-York, and, while here, wrote the poem for the celebration of the birth of Linnaeus, at Flushing, Long-Island. In June, 1824, he made a tour of the western part of the state, with the intent to fix on a suitable place for the prosecution of his profession. In the same month he arrived at Syracuse, Onondaga county, and commenced the practice of the law in that village. It was there that the writer of this article first enjoyed the pleasure of his acquaintance and friendship:—and he looks back to the many bright and hallowed hours which he has had the happiness to spend in his society, as upon

"Spots of earth, where angel-feet have stept."

As affirmed in the New York Mirror memorial, John Rudolph Sutermeister wrote the poem titled "Mind," published in The New-York Review for May 1826 over the initials "J. R. S." 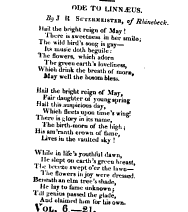 Reprinted in the Baltimore American Farmer (August 13, 1824), Sutermeister's "Ode to Linnaeus" appears in the official published account of the Celebration at Flushing, of the Birthday of Linnaeus (New York Statesman, 1824).

Posted by Scott Norsworthy at 4:19 PM