Clams, boats, and footnotes in Pierre

BOOK XXVI.
A WALK; A FOREIGN PORTRAIT; A SAIL; AND THE END.
I.
"Come, Isabel, come, Lucy; we have not had a single walk together yet. It is cold, but clear; and once out of the city, we shall find it sunny. Come: get ready now, and away for a stroll down to the wharf, and then for some of the steamers on the bay. No doubt, Lucy, you will find in the bay scenery some hints for that secret sketch you are so busily occupied with—ere real living sitters do come—and which you so devotedly work at, all alone and behind closed doors."  --Pierre, Book 26

The passage quoted above occurs near the start of the last "Book" (XXVI) of Herman Melville's Pierre; or, The Ambiguities. In a footnote to this passage, the editors of the 2017 Norton Critical Edition of Pierre inform their target audience of undergraduate readers that Melville's word steamers means "Clams" (page 344).

Clams or boats? Does it matter? Sometimes I think nobody really gives a flip about footnotes except me and one or two librarians in the basement annex. Not to alarm my fellow sub-subs, but it has occurred to me before now that scholarly footnotes--especially the short informative kind, as distinct from more luxurious interpretive and argumentative varieties--may already be obsolete in the era of smartphones, like print yellow pages and street-maps.

Consider the merits of Melville's alternative title: The Ambiguities. On reflection, I wish Pierre had treated his dear companions Lucy and Isabel to a bucket of steamed clams, after their walk to the wharf. If only they had stopped to eat some delicious "steamers" instead of boarding one on the bay. Lunch over, the ill-starred trio might have returned sooner to their rooms in the "Church of the Apostles." With proper nourishment, Pierre could finally have finished his "vile" Inferno of a novel. Who knows, Lucy might soon have found customers for her portrait sketches; Isabel guitar students. In this half-baked alternative scenario, perhaps the killing of Pierre's cousin Glen and the awful tragic ending might have been averted.

Steamer clams or "steamers" are "a specialty of New England," as Elise Bauer informs in How to Cook and Eat Steamer Clams on Simply Recipes. Here on the prairie, "steamers" conjure pleasant thoughts of Cape Cod and Chesapeake Bay. But Edible Long Island will tell you that New York clamologists know plenty about soft shell clams (aka piss clams, longnecks or Ipswich clams) too.

Indeed, Eater NY has a whole article on
Commenters there dispute the notion that steamers are "more of a Boston thing." In the category of "Oddities," Sietsema mentions that


Off the Hook in Astoria, Queens, presents pots of steamed softshell clams, known as "steamers," and so does London Lennie’s in Woodhaven, Queens.

In chapter 15 of Moby-Dick, Ishmael and Queequeg enjoyed two kinds of chowder at the Try Pots on Nantucket island, one with clams. New York connoisseurs rave about the steamer clams at Pearl Oyster Bar, located at 18 Cornelia Street in Manhattan's West Village. Steamers on Cornelia get us to the right place, after all, since the unnamed "city" in Melville's Pierre is modeled on Manhattan.

Right place but wrong century I guess for steamers to mean clams. Melville's "steamers on the bay" are vessels in New York Harbor, ferry boats and ocean steamers. For context, here's a relevant description from 1853 by Cyrus Redding, writing for the London New Monthly Magazine under the pseudonym "J. W. Hengiston": 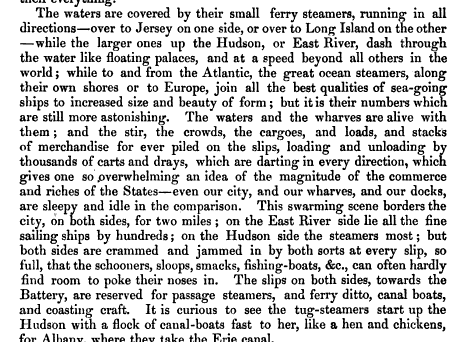 The waters are covered by their small ferry steamers, running in all directions—over to Jersey on one side, or over to Long Island on the other —while the larger ones up the Hudson, or East River, dash through the water like floating palaces, and at a speed beyond all others in the world; while to and from the Atlantic, the great ocean steamers, along their own shores or to Europe, join all the best qualities of sea-going ships to increased size and beauty of form; but it is their numbers which are still more astonishing. The waters and the wharves are alive with them; and the stir, the crowds, the cargoes, and loads, and stacks of merchandise for ever piled on the slips, loading and unloading by thousands of carts and drays, which are darting in every direction, which gives one so overwhelming an idea of the magnitude of the commerce and riches of the States—even our city, and our wharves, and our docks, are sleep and idle in the comparison. This swarming scene borders the city, on both sides, for two miles; on the East River side lie all the fine sailing ships by hundreds; on the Hudson side the steamers most; but both sides are crammed and jammed in by both sorts at every slip, so full, that the schooners, sloops, smacks, fishing-boats, &c., can often hardly find room to poke their noses in. The slips on both sides, towards the Battery, are reserved for passage steamers, and ferry ditto, canal boats, and coasting craft. It is curious to see the tug-steamers start up the Hudson with a flock of canal-boats fast to her, like a hen and chickens, for Albany, where they take the Erie canal.  --J. W. Hengiston [Cyrus Redding] on "New York—Its Hotels, Waterworks, and Things in General" in The New Monthly Magazine Vol. 97 (London, 1853) page 87

Back in Book 26 of Pierre, a detour brings Pierre, Isabel, and Lucy to an upstairs art gallery. Unfortunately, nobody mentions stopping for clams afterward. Instead, they get on a ferry boat quite like those encountered at "slips on both sides, towards the Battery" by Redding/Hengiston.


In the midst of all these mental confusions they arrived at the wharf; and selecting the most inviting of the various boats which lay about them in three or four adjacent ferry-slips, and one which was bound for a half-hour's sail across the wide beauty of that glorious bay; they soon found themselves afloat and in swift gliding motion.

As Henry A. Murray observed seventy years ago in one of the "Explanatory Notes" for the 1949 Hendricks House Pierre:


"It seems that Pierre and his companions are at the Battery, New York City, and have selected a Staten Island ferry boat for a ride across the harbor."

Posted by Scott Norsworthy at 5:56 PM