Cortez at Vera Cruz and Caesar's burning boats in "The Enthusiast"

"Though He slay me
yet will I trust in Him."

Shall hearts that beat no base retreat
In youth's magnanimous years—
Ignoble hold it, if discreet
When interest tames to fears;
Shall spirits that worship light
Perfidious deem its sacred glow,
Recant, and trudge where wordlings go,
Conform and own them right?

Shall Time with creeping influence cold
Unnerve and cow? the heart
Pine for the heartless ones enrolled
With palterers of the mart?
Shall faith abjure her skies,
Or pale probation blench her down
To shrink from Truth so still, so lone,
Mid loud gregarious lies?

Each burning boat in Caesar's rear,
Flames—No return through me!
So put the torch to ties though dear,
If ties but tempters be.
Nor cringe if come the night:
Walk through the cloud to meet the pall,
Though light forsake thee, never fall
From fealty to light.

The point of the historical analogy is absolutely clear: imitate Caesar if you have to and burn your boats, rather than conform over time to the lying material world and its values. Caesar's boats are whatever binds one to worldliness, whatever one regards as the most appealing temptations to follow the corrupt crowd. The heroic seeker of truth and light should keep true to the dreams of youth and resist corrupting influences.

Burn the fleet! No turning back for Melville's self-consciously aging enthusiast speaker.

But wait, when ever did Caesar burn his boats, and why? The Northwestern-Newberry edition of Melville's Published Poems cites Plutarch, who tells us that


"because Achillas (one of the assassins of Pompey) escaped, Caesar was forced to burn his own ships in the harbor at Alexandria 'to prevent their falling into the enemy's hands.'"

In Plutarch's account Caesar "was forced to burn himself" his own ships, "and the flames unfortunately spreading from the dock to the palace, burnt the great Alexandrian library."

Terrible! The terrible destruction of the glorious library at Alexandria is the really significant event, surely. As for the action of burning his ships, that was something Caesar was forced into doing--nothing especially noble or heroic about that. It seems a feeble example of noble enthusiasm. Furthermore, in this particular case the sense of "no return" does not apply. Caesar did not burn his ships in order to prevent return, but to prevent attack.

Caesar's hugely famous "point of no return" moment was, of course, his Crossing the Rubicon. Melville compared his hero to Caesar using the Rubicon analogy in a chapter of Pierre (1852), He Crosses the Rubicon.

The great instructive example of burning boats is not Caesar but Hernán Cortés.

Legend has it that Cortés burned his ships.   Nit-pickers insist Cortes scuttled his ships but did not actually set fire to them:


There is a popular misconception that Cortés burned the ships instead of scuttling them. This may have come from a mistranslation of the version of the story written in Latin.  (New World Encyclopedia)

Update: Examining the legend and its historical and literary significance, Winston A. Reynolds confirms, "Cortés did not burn his ships, although it is true that he destroyed them."

Nevertheless, even now in this enlightened twenty-first century, "burn the ships" or fleet or something to the effect of burning one's boats is a proverb of brilliant business strategy and life wisdom.

In contrast to the bad example of Caesar, the story of Cortés at Veracruz supplies exactly the right parallel to the enthusiast's urge of "no return" in Melville's poem. Perhaps Melville misremembered the story of Cortés and confused or fused it in "The Enthusiast" with Caesar's "no return" moment of crossing the Rubicon. The jump from Rubicon to burning boats is easy to make.

OK then, let's see what they said in Melville's century about Cortez burning his boats. First hit, look at this quotation from Harris in the drama Cortez, or, the Conquest of Mexico by James Robinson Planché:


“ The more we consider and reflect upon the strokes of our hero’s policy, the more we must be persuaded he deserves that title, since nothing could be greater in itself, or performed with more spirit and resolution, than his scheme of burning his ships, which he knew must fill his soldiers with a determined resolution to conquer, since it absolutely took away what had hitherto damped and qualified that ardour, the hopes of getting back to Cuba, and escaping perpetual labours by a timely, but less honourable retreat.”—Voyage of F. Cortes—Harris’s Collection, Vol. 2. 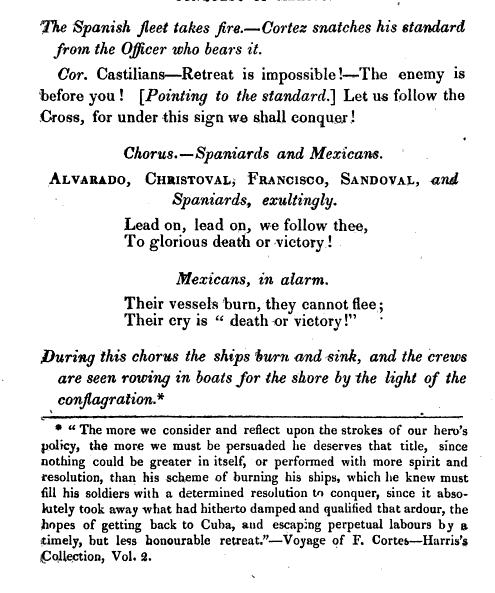 The Spanish fleet takes fire.— Cortez snatches his standard from the Officer who bears it.

Cor. Castilians—Retreat is impossible!—The enemy is before you! [Pointing to the standard] Let us follow the Cross, for under this sign we shall conquer!

Lead on, lead on, we follow thee,
To glorious death or victory!

Their vessels burn, they cannot flee;
Their cry is “death or victory!”

During this chorus the ships burn and sink, and the crews are seen rowing in boats for the shore by the light of the conflagration. --Cortez; or, the Conquest of Mexico.

Another source in the same vein:


He leaves to posterity an example of courage, that has not been imitated since, by burning the fleet in which he had made his voyage, in order to prevent the hope of return, and to place his men under the necessity of 'conquering or dying,'— words which many have uttered; a deed which few have done. --American Magazine

Yes, the story of Cortés perfectly captures both the sense and spirit of Melville's poem "The Enthusiast."
Related post:
Posted by Scott Norsworthy at 3:29 PM