1817 book by Mary and P. B. Shelley, from the library of Herman Melville 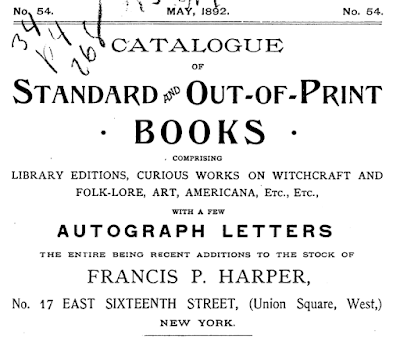 Herman Melville died in September 1891. His widow Elizabeth and daughter "Bessie" moved to the Florence Apartments on June 7, 1892, as documented by John M. Gretchko in The Florence, Leviathan Volume 16, Number 1 (March 2014), pages 22-32 at 30. Before that, as Steven Olsen-Smith recounts, lots of volumes in Herman Melville's library

Here's one. Among "recent additions to the stock of Francis P. Harper" in May 1892 was the 1817 first edition of Mary Shelley's History of a Six Weeks' Tour, "from the library of Herman Melville, with his autograph in pencil." Listed in Harper's Catalogue of Standard and Out-of-Print Books No. 54 (May 1892), page 24:

First Edition, from the library of Herman Melville, with his autograph in pencil.


Largely Mary Shelley's History of a six weeks' tour, the 1817 volume has a preface and two letters by her husband Percy Bysshe Shelley, and concludes with first printing of P B Shelley's poem Mont Blanc.
The first edition of History of a Six Weeks' Tour is accessible online courtesy of The British Library; Hathi Trust Digital Library; and the Internet Archive: