Redburn in the London Morning Chronicle 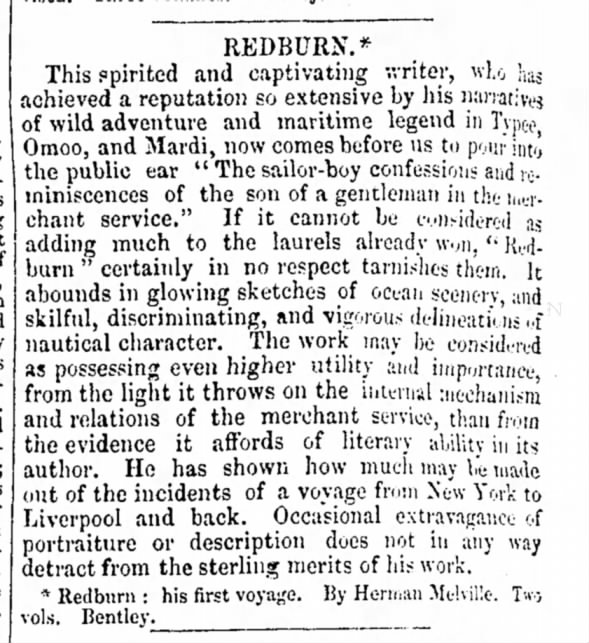 From the London Morning Chronicle, November 28, 1849; found at Newspapers.com:

This spirited and captivating writer, who has achieved a reputation so extensive by his narratives of wild adventure and maritime legend in Typee, Omoo, and Mardi, now comes before us to pour into the public ear "The sailor-boy confessions and reminiscences of the son of a gentleman in the merchant service." If it cannot be considered as adding much to the laurels already won, "Redburn" certainly in no respect tarnishes them. It abounds in glowing sketches of ocean scenery, and skilful, discriminating, and vigorous delineations of nautical character. The work may be considered as possessing even higher utility and importance, from the light it throws on the internal mechanism and relations of the merchant service, than from the evidence it affords of literary ability in its author. He has shown how much may be made out of the incidents of a voyage from New York to Liverpool and back. Occasional extravagance of portraiture or description does not in any way detract from the sterling merits of his work.

Posted by Scott Norsworthy at 10:20 AM