Hobbes's Leviathan, from the library of Herman Melville

Early in 1892, as Merton M. Sealts, Jr. relates in Melville's Reading (University of Wisconsin Press, 1966) and Pursuing Melville, 1940-1980 (University of Wisconsin Press, 1982), Brooklyn bookman Alfred Francis Farnell (1835-1908) bought a lot of the late Herman Melville's books for $120. Among the most valuable was a rare 1651 edition of Hobbes's Leviathan, according  to this bit of "Brooklyn Gossip" in the New York Evening World for March 19, 1892. Found at GenealogyBank among items added "within 3 months."

Bibliomaniacs seldom visit "Ye Olde Booke Shoppe," on Court street, without feasting their eyes on something rare and valuable.

"We have just purchased," says Mr. Farwell [A. F. Farnell], "the library of the late Herman Melville, of New York, and we obtained some valuable works. Here is one bearing the date of 1651."

It was the second edition of the "Leviathon," [Leviathan] published in London and much valued by Mr. Melville.

Obituary of Alfred F. Farnell in the Brooklyn Daily Standard Union, May 14, 1908:

Alfred Francis Farnell, bookseller, of 46 Court street, died Tuesday [May 12, 1908] of heart disease at his home, 96 Garfield place. Mr. Farnell established the Court street business known as A. F. Farnell & Sons in 1880. He was born in Yorkshire, England, June 5, 1835, and went to New Haven, Conn., in 1865, where for a number of years he conducted a circulating library. he is survived by two sons, Fred W. and Henry A., a daughter, Maude M., and a sister, Mrs. A. Blair, of Montgomery, Ala. Mr. Farnell was a member of the Second Unitarian Church, and the Rev. C. S. S. Dutton conducted funeral services this afternoon. Buried in Greenwood Cemetery.

The Leviathan by Thomas Hobbes is #358 in Melville's Sources (Northwestern University Press, 1987) by Mary K. Bercaw Edwards; not currently listed in "The Online Catalog of Books and Documents Owned, Borrowed and Consulted by Herman Melville" at Melville's Marginalia Online.

Below, another image of the "Brooklyn Gossip" item in the New York Evening World, via Newspapers.com 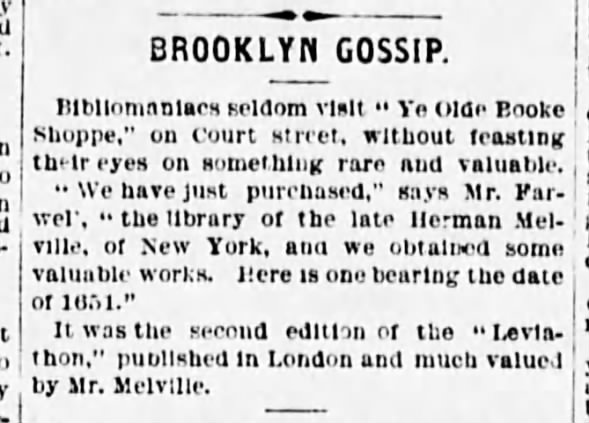 Posted by Scott Norsworthy at 6:08 PM