[Unpublished before today, the 200th birthday of Herman Melville.]

Forgive me for bragging, but that exceedingly rare typo in the note to “A Dirge for McPherson” on page 655 of the 2009 Northwestern-Newberry Edition of Published Poems (Volume 11 in The Writings of Herman Melville) is my doing. Don’t be fooled when others pipe up to claim it. In my heart I know it’s mine, and I want due credit. As will be seen, the error is fairly and squarely on me, though the real, underlying motive remains murky and difficult to fix, fluctuating among various sins, all more or less damnable: inexcusable laziness (best case scenario); ego-tripping and blind hero-worship (not so good); and unbelievably mean and petty jealousy (worst case, fortunately inadmissible since nobody ever admits to Envy, as pointed out by somebody somewhere in Volume 13.) Anyhow, here’s what happened. In 2008 (after Sczcecin, before Jerusalem if you know what I mean), Legends of Melville scholarship were at work, assisted by Giants of library science and academia. I hacked a few of their alarming emails to each other: substantive, deeply informed, intellectually rigorous communications about the next-to-last job on a monumental project that had started decades and decades before, back when I was digging MAD magazine and Iron Butterfly. In-A-Gadda-Da-Vida, the 17:05 album version, which upon reflection has everything to do with Typee and archetypes of Paradise. I mean Paradise Lost. Well you see why I might not make the most disciplined of proofreaders. Here and there I did attempt to make myself useful on bibliographical puzzlers—tricky business then, now pretty much child’s play on a smart phone. Otherwise, I kept telling myself, “Be quiet; stay out of the way; don’t bother The Legends.” Eventually though, I got sick and tired of their being right all the time. Once General Editor Hershel Parker (Maestro to me) with his knack for getting at cruxes asked about McPherson as Sarpedon in Melville’s “Dirge.” Simply Melville’s mistake for Patroclus, or some craftier confusion of opposed heroes?

On that score, no one could better what Hennig Cohen wrote into his great 1964 edition of Battle-Pieces. The unsolved and maybe unsolvable mystery of Sarpedon led to reconsideration of the account of McPherson’s fall that Melville quoted in his original 1866 note, crediting “the Achilles to this Sarpedon.” Where did Melville get it? Which “Achilles” in the United States Army testified, “On that day we avenged his death”? From context, Associate General Editor Robert D. Madison inferred Sherman. I guessed General John A. Logan and the fight was on. Privately, I vowed to confound all those Legends, dead or alive, with documentary proof that Logan not Sherman was Melville’s primary source. Alas, however, the most suggestive evidence I could muster was aggravatingly short of conclusive: the New York Times (13 October 1864) and later sources merely identified Logan as having “avenged the death of his comrade and commander.” Then again, Logan as heroic avenger (“McPherson and Revenge!” his wrathful cry in the Battle for Atlanta) fit the Achilles mold so well, maybe we could finesse the failure to locate a more exact verbal parallel to the quoted words in Melville’s note. Page proofs came with my Logan reference newly and neatly blended into the editorial “Discussion” of Sarpedon. Victory! If only it would do, which it would not. In prose Melville described his Union Army Achilles as both warrior and narrator. Logan avenged, to be sure, but the word avenged was from one of the official reports—by who? Sherman. Searching again in Google Books, I found it, the passage that Melville took verbatim from Sherman’s letter to the Adjutant-General dated July 24, 1864, reporting the death of James B. McPherson. The relevant text of the 1864 letter appeared in Sherman’s article titled “The Late Major-General J. B. McPherson,” first published in the April 1866 issue of Hours at Home and reprinted soon thereafter in newspapers, for instance The New York World on April 14, 1866, under the heading “THE LATE GEN. MCPHERSON. / A Personal Sketch by Major-General Sherman….”

Madison was right all along. This late in the game (and Jerusalem looming), could the page proof be massaged one more time to incorporate the discovery of Melville’s source in one or another version of Sherman’s 1864 report? Yes. The editors obliged with the coolness and grace of veterans. Little left to do, right, except reserve a room at Mount Scopus Hotel and, oh yeah, proofread. Like I promised. Especially that one page with those late changes and later changes to changes. OK, bad news first: the wrong number in the date of 1895 in the cite of Sealts, no. 17 occurred amidst revisions I should have proofread. Worse, I did proofread that page. Even worse than that, I half-remember seeing 1895 and thinking “WTF?”

Now for the good news of my mental breakthrough: no more self-torment. Six did turn out to be nine, so what? If you can’t handle the truth, Scott, just turn the book around and read Melville upside-down. 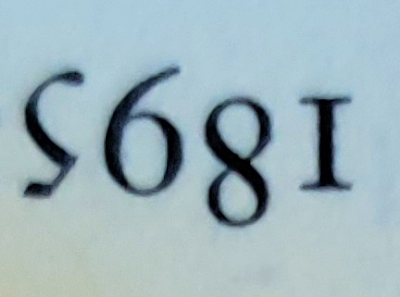 One more thing and my humble tribute to Harrison Hayford is done. (Forgot to mention Hayford by name, but The Legends were, are his students—every blessed one.) Since Herman Melville at long last has sailed into the public domain, most of his writings are available online. One fine day The Writings of Herman Melville must get there, too. Now that any clown can Google William Tecumseh Sherman, will future publishers of Melville in digital and other media yet undreamt even bother about explanatory notes? If they do bother with such quaint and increasingly unnecessary endeavors, my boasted contribution, along with the residual honor and glory I frankly covet, could vanish in two clicks. In other words, faster than you can say “Ahab.” What then, Mr. Big Stuff? Nothing for it but last respects among the remains of my personal library, that part not carted to Half-Price Books. Cubs cap in one hand and Volume 11 (hardback, 960 pages) in the other, I will have to console myself with its undeniable heft and the fact that in print, typos are forever.