Papers in the Richard Garnett Collection of the Harry Ransom Center, The University of Texas at Austin show that Richard Garnett (1835-1906), then Keeper of Printed Books in the British Museum, received a two-volume set of Herman Melville's verse epic Clarel (1876) from Samuel Cabot of Boston. The relevant papers currently are located in Manuscript Collection MS-1545, Container 12.8. Cabot had purchased the volumes from Manhattan book dealer John Anderson, Jr., for $6.00, as indicated on the receipt dated March 14, 1892. Just a few weeks before, on February 25, 1892, Anderson paid Elizabeth Shaw Melville $120 for a lot of books from her late husband's library, as reported by Merton M. Sealts, Jr. in Melville's Reading (University of Wisconsin Press, 1966), page 6; and Pursuing Melville, 1940-1980 (University of Wisconsin Press, 1982), page 35.

On his passport application dated May 26, 1891 (issued May 28, 1891), Samuel Cabot gave his occupation as "Chemist" and his date of birth as February 18, 1850. With business partner Frederick Nourse, this Samuel Cabot (1850-1906) founded the Samuel Cabot Company, later famous for Cabot Stains. Cabot is named among "Notable Alumni" of the Boston Latin School. According to the Boston Athanaeum,


Cabot became an entrepreneur and manufacturer of lampblack and coal tar products and was one of the earliest New England manufacturers to introduce a profit-sharing system to his employees, ca.1885

Cabot was an alumnus and strong supporter of the Massachusetts Institute of Technology. As reported in the Boston Globe, his unexpected death from pneumonia on November 26, 1906 was widely mourned in the M. I. T. community. 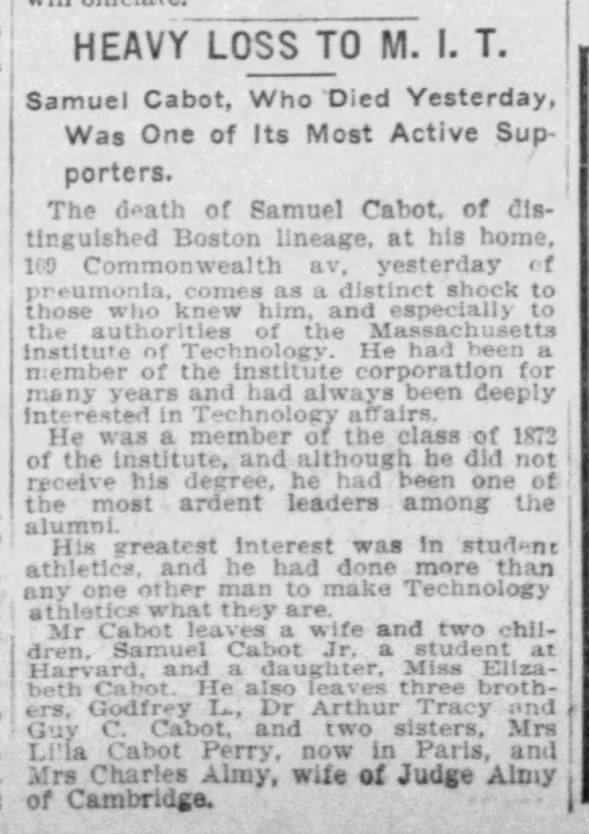 Catalog records reveal that Richard Garnett himself owned a copy of Clarel, and so did the British Museum. Garnett's personal copies of Melville's Clarel and also The Whale are listed in the Catalogue of the library of the late Dr. Richard Garnett, C.B.:

Possibly Samuel Cabot's Clarel, the one bought from John Anderson, Jr. on March 14, 1892, was meant for the British Museum. In the second of two undated notes transcribed below, Cabot offers to hunt up "any other books that you might want at the Museum." But Cabot then extends his offer to Garnett personally, complicating the question of where this particular Clarel went.

Garnett may have asked Cabot for more of Melville's poetry. Samuel Cabot of "70 Kilby St., Boston, Mass." advertised in The Publishers Weekly on March 5, 1892 for "Any vols. of verses by the late Herman Melville."

On March 19, 1892 and March 26, 1892, Cabot advertised in The International Bookseller under "Books Wanted" for "Any of the poetical works of Herman Melville."

Here then are my transcriptions of two letters from Samuel Cabot to Richard Garnett. For expert help with finding and duplicating these items for research, I am grateful to Virginia T. Seymour at the Harry Ransom Center, The University of Texas at Austin.
[1.]

I have just received your "leaflet from the Greek Anthology" together with a copy for my sister, which I sent to her.

I thank you very much, and expect to owe you more still after I have read it.

I wish you would allow me to present you with the "Clarel" but as you insist so strongly in your last letter I enclose the bill, although I should much prefer that you would accept it as a slight return for your kind assistance to me while in London.

Nothing I have ever seen has impressed me as your superb Library did. It seemed like the Arabian Nights and I felt as if you had lent me Aladdin's lamp.

-- Harry Ransom Center, The University of Texas at Austin     https://www.hrc.utexas.edu/

I received your kind note with its enclosed money-order just as I was leaving home and now hasten to acknowledge it.

I have read your charming verses with much pleasure.

Pray give me the pleasure of looking for any other books that you may want at the Museum, only please allow me to contribute them myself if it is possible.

I should be equally glad to do the same for you and I assure you it was a genuine regret to me that the circumstances of the case seemed to you to force you to repay my outlay.

With much regard
I am yours
Sam Cabot

-- Harry Ransom Center, The University of Texas at Austin    https://www.hrc.utexas.edu/

Cabot's appreciation of Garnett's kindness at the British Museum was echoed in the beautiful memorial article by Frank Karslake, published in Book Auction Records Volume 3 (London, 1906):


"A stranger expected to find an official, and instead found the kindest of friends."

Karslake's 1906 tribute will reward further study, being rich in biographical facts and insights.


Born at Lichfield, Feb. 27, 1835; Eldest son of the Rev. Richard Garnett, Assistant Keeper of Printed Books, British Museum ; Entered the Library of the British Museum, 1851 : Entrusted to arrange the recent acquisitions to the Library, 1857; Married Olivia Narney, daughter of Edward Singleton, Esq., 1863; Appointed Superintendent of the Reading Room, 1875; Edited the Printed Catalogue of the British Museum Library, 188o 1889; Received the degree of LL.D. from the University of Edinburgh. 1883; Appointed Keeper of the Printed Books in the British Museum, 1890; Made a C. B., 1895; Retired from the British Museum, 1899 ; Appointed a Trustee of the National Portrait Gallery, 1905; Died at Hampstead, April 13, 1906. Dr. Garnett was an Honorary Member of the American Philosophical Society of Philadelphia, the Massachusetts Historical Society, the Società Bibliographica Italiana; and of the Dante Society; and has been President of the Library Association ; of the Bibliographical Society, of the Modern Languages Association, and of the Hampstead

Antiquarian Society. The following is believed to be a correct list of his more important publications:—

‘Primula", a volume of poems, (anonymously), 1858, republished in 1859, with extensive additions, under the title of . Io in Egypt and other Poems ’; Poems translated from the German, 1862; ' Relics of Shelley (Fragments in Verse and Prose discovered among Shelley's MSS. since incorporated into the standard editions of the poet's writings). 1862; Monthly Digest of Contemporary German Literature (for The Saturday Review), 1864-82; Idylls and Epigrams chiefly from the Greek Anthology’, 1869 (republished under the title of ‘A Chaplet from the Greek Anthology', 1892); ‘The Soul and the Stars”, (article under the anagram of A. G. Trent, in The University Magazine, March, 1880, since republished); ' Life of Thomas Carlyle', 1887; Survey of Victorian Literature (in T. H. Ward's Reign of Queen Victoria'), 1887; 'Life of Emerson', 1888; 'Twilight of the Gods', 1888, (two new and augmented editions were published in 1903); ' Life of Milton ’, 1800; ' Iphigenia in Delphi, a Tragedy ', 1800 ;  Poems', 1893; ‘The Age of Dryden', 1895; ‘Life of William Blake, Painter and Poet', (Portfolio Monograph), 1895; ‘Sonnets translated from Dante, Petrarch and Camoens', 1896; ‘Richmond-on-the-Thames, (Portfolio Monograph), 1896; A Short History of Italian Literature', 1898; Edward Gibbon Wakefield, a Biography ', 1898; Essays in Librarianship and Bibliography ', 1809; Essays of an Ex-Librarian', 1901; ‘The Queen and other Poems', 1902; ' William Shakespeare, Pedagogue and Poacher', 1904; English Literature, an Illustrated Record, (with Edmund Gosse), 1904; De Flagello Myrteo', 1905. Dr. Garnett also edited and prefaced many books, wrote several pamphlets, (now sought for and scarce), contributed extensively to periodical literature, and wrote numerous articles in the ‘Encyclopaedia Britannica' and the Dictionary of National Biography', while at the date of his death he was engaged upon a Life of William Johnson Fox, announced for publication during the present year by Smith, Elder & Co.]

Of course such a man bought some books for himself and more to give away. Some of us have seen him at Denny's in the Strand, or at Dobell's in Charing Cross Road, but no doubt his large private library grew more through gifts from authors and friends than from purchasing. He was for many years an intimate friend of Lady Shelley, he is said to have owned some Shelley MSS. and he must certainly have had a fine collection of Shelley literature and scarce books in nearly all departments of letters, for his interests were very wide. I should guess that in particular he had everything written by his friends Coventry Patmore and George Meredith, whose early works he reviewed for the Examiner. But my theme is inexhaustible. It is pleasant to know that Dr. Garnett was most happy in his home-life. Mrs. Garnett, who often looked in upon us, must have been an ideal wife. Bright and witty, she, too, was fond of books, and had her own particular collection. Their children have inherited their tastes, and the names of three of them appear as authors or editors in the British Museum Catalogue. When Mrs. Garnett's death came I received a letter from Dr. Garnett on the subject which I shall treasure as a memento of a remarkable personality. Of late he seemed to age somewhat rapidly. Yet the fatal illness came quite unexpectedly. The nurse who tended him during the week which was his last on earth told us that she never had so gentle, so considerate a patient; that his one complaint was that the family and she were doing more than they should ; that he was giving them too much trouble; that they were getting no rest. All the week through only smiles and thanks came from his lips. Simplicity, I take it, was the main feature of his character; it is often so with great minds.

The following sonnet, written by Dr. Garnett, is comparatively little known, and will be of interest to all “book-men.”


AN OLD PERUVIAN BOOK
Printed at a Mission Station in the Andes, 1612.
BOUGHT BY THE BRITISH MUSEUM

Screened in the shadows Cordilleras fling,
Where straining breast scarce breathes, and straining eye
Sees naught 'twixt lifted sight and silent sky
Save the huge Condor hung on heavy wing:—
Small skill, great love, there made me, light to bring
Where, sunk beneath the mountain far as I
Had birth aloft, the Indian's misery
Plied toil unblest for Europe's profiting.
The silver that his labour sunward drew
Now buys me, haply, in this foreign mart
Where Love and Skill and Labour bartered are,
And it and I have interchanged our part:
Homeward it journeys to remote Peru
Leaving me here beneath the Northern Star.

Note:— The portrait of Dr. Garnett which accompanies this part was taken shortly after he received his C.B. in 1895, and the order is seen on his breast. The portrait, I think, has never before been published: it possesses special interest in that it presents Dr Garnett in the prime of his life, before evidence of age appeared. It was originally taken by Messrs. Dickinson of New Bond Street, with whom I have arranged for its reproduction here. It should not go unchronicled in these pages that since Dr. Garnett's death a general chorus of appreciation of his unvarying goodness and kindness, to all alike, as well as of the great value of his writings, has gone up from the press of many countries, finding keen expression in England from the pens of such writers and associates as A. W. Pollard, Sir F. T. Marzials, Ford Madox Hueffer, Beatrice Harraden, Agnes A. Adams, and Alice Zimmern. By many critics Dr. Garnett's remarkable volume of stories “The Twilight of the Gods" is now ranked with the best work of the celebrated Anatole France. I believe that many of Dr. Garnett's stories were originally published in magazines before the great Frenchman began to write. Copies of the first edition of the “Twilight,” published by Fisher Unwin, are now scarce; but the scarcest of Dr. Garnett's works is his first volume of poems— “Primula." Indeed I do not recollect a copy of it occurring for sale.

Posted by Scott Norsworthy at 4:00 PM