This complaint by Herman Melville's mother Maria Gansevoort Melville won early recognition in Melville scholarship as a gem of maternal indignation, and a glimpse at Melville's mood while creatively engaged. In this case, preoccupied with the writing of Moby-Dick. James C. Wilson quotes it and other newfound items from the Augusta Melville papers in "Melville at Arrowhead," ESQ 30.4 (1984): 232-44 at 241; reprinted in The Hawthorne and Melville Friendship (McFarland, 1991), pages 208-209. (Wilson reads "train" where other transcriptions have "time.") Recounted also in Historical Notes for the 1984 Northwestern-Newberry Edition of The Confidence-Man: His Masquerade; the 1988 Northwestern-Newberry Edition of Moby-Dick, or The Whale; and Hershel Parker's Herman Melville: A Biography Vol. 1, 1819-1851 (Johns Hopkins University Press, 1996), page 820. Parker voices the unstated contrast between Herman and his dead brother Gansevoort, the gallant one. Laurie Robertson-Lorant cites part of it in Melville: A Biography (University of Massachusetts Press, 1996), page 266. Andrew Delbanco opens with it in Melville's Fever, reviewing two editions of Pierre for The New York Review of Books (April 4, 1996). Also quoted in Delbanco's New York Times essay Melville Has Never Looked Better (October 28, 2001); and Melville: His World and Work (Random House, 2006). Clare L. Spark has it in Hunting Captain Ahab: Psychological Warfare and the Melville Revival (Kent State University Press, 2001; Second Edition 2006), page 9.

Now you can read about Herman Melville's "ungallant" conduct at the Pittsfield Depot in the handwriting of his mother. Written from New York City, Maria's letter of March 10, 1851 to Herman's sister Augusta in Pittsfield is available online in the digitized Augusta Melville papers, courtesy of The New York Public Library Digital Collections.

Herman I hope returned home safe after dumping me & my trunks out so unceremoniously at the Depot. Altho we were there more than an hour before the time, he hurried off as if his life had depended upon his speed, a more ungallant man it would be difficult to find. I hope to hear from Herman, & Helen tomorrow.

As pointed out in the 1993 Northwestern-Newberry Edition of Melville's Correspondence (ed. Lynn Horth), this epistolary grievance exemplifies "the device of the indirect message," being addressed to Augusta but "clearly intended" by Maria G. Melville "to reach her recalcitrant son" (page 784).

It looks like Herman got the message. Early in Melville's next book after Moby-Dick, the hero is what the author was not that day at the Pittsfield Depot, ultra-attentive to his mother. Pierre acts like a lady-in-waiting to help his royal "Duchess" get dressed, affectionately calls her "sister," physically bows and kneels before her, and makes a show of escorting her to breakfast "with a humorous gallantry":


The haughtily happy mother rose to her feet and as she stood before the mirror to criticize her son’s adornings, Pierre, noticing the straggling tie of her slipper, knelt down and secured it. “And now for the run,” he cried, “Madam!” and with a humorous gallantry, offering his arm to his mother, the pair descended to breakfast. --Pierre; Or, The Ambiguities (1852). 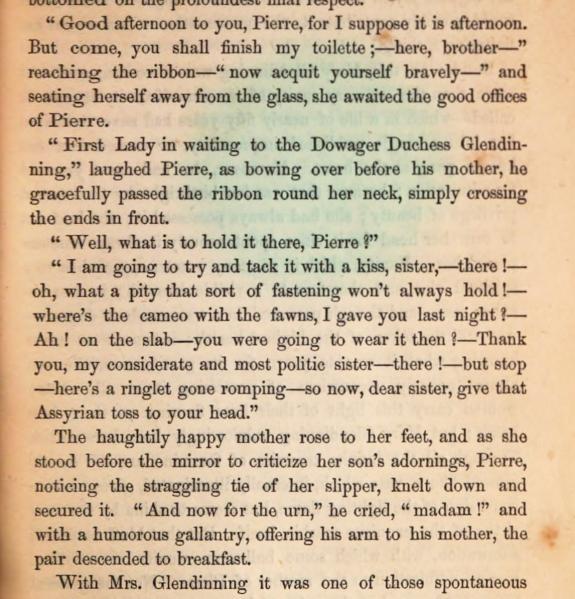 Posted by Scott Norsworthy at 7:41 AM