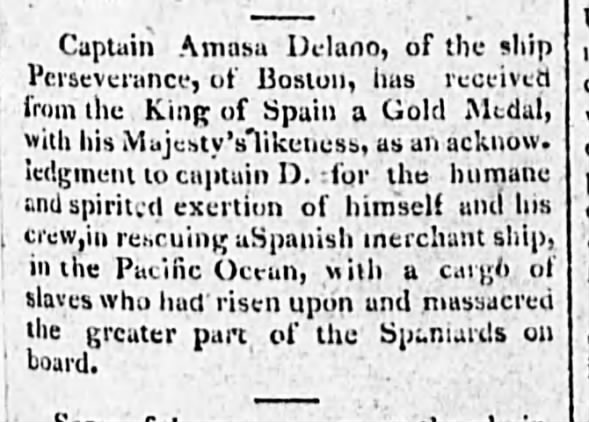 
Captain Amasa Delano, of the ship Perseverance, of Boston, has received from the King of Spain a Gold Medal, with his Majesty's likeness, as an acknowledgment to captain D. for the humane and spirited exertion of himself and his crew, in rescuing a Spanish merchant ship, in the Pacific Ocean, with a cargo of slaves who had risen upon and massacred the greater part of the Spaniards on board.  --Poughkeepsie Journal, September 2, 1807. 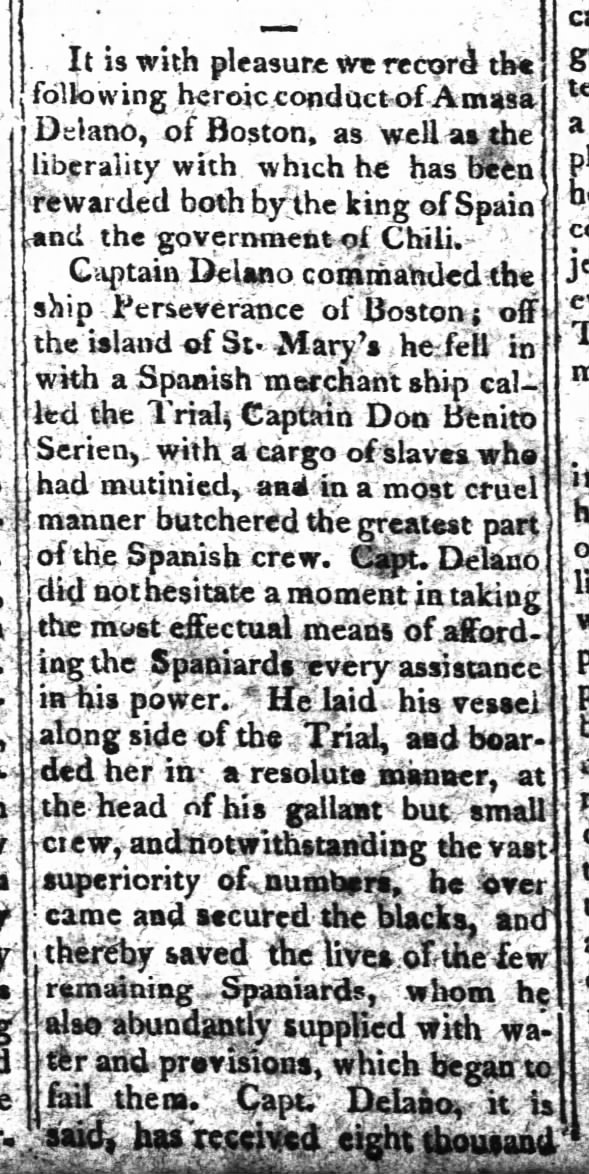 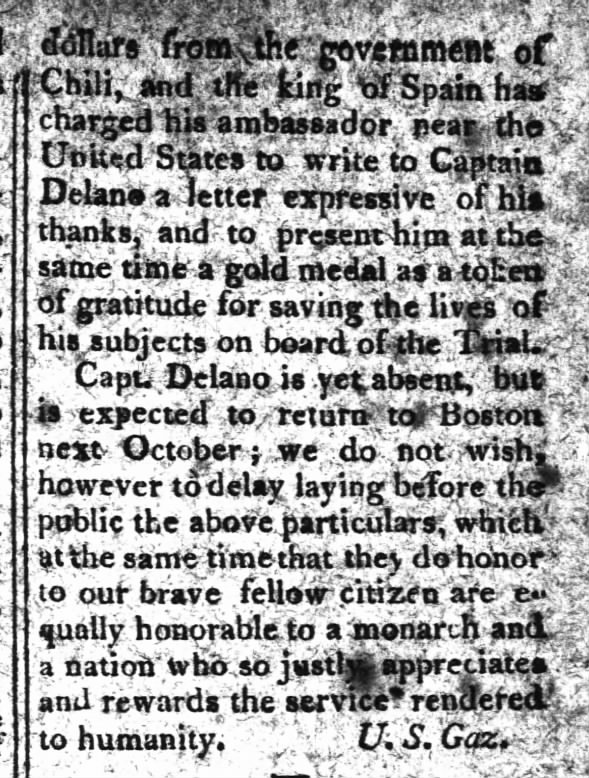 
It is with pleasure we record the following heroic conduct of Amasa Delano, of Boston, as well as the liberality with which he has been rewarded by the king of Spain and the government of Chili.

Captain Delano commanded the ship Perseverance of Boston; off the island of St. Mary's he fell in with a Spanish merchant ship called the Trial, Captain Don Benito Serien, with a cargo of slaves who had mutinied, and in a most cruel manner butchered the greatest part of the Spanish crew. Capt. Delano did not hesitate a moment in taking the most effectual means of affording the Spaniards every assistance in his power. He laid his vessel along side of the Trial, and boarded her in a resolute manner, at the head of his gallant but small crew, and notwithstanding the vast superiority of numbers, he over came and secured the blacks, and thereby saved the lives of the few remaining Spaniards, whom he also abundantly supplied with water and provisions which began to fail them. Capt. Delano, it is said, has received eight thousand dollars from the government of Chill, and the king of Spain has charged his ambassador near the United States to write to Captain Delano a letter expressive of his thanks, and to present him at the same time a gold medal as a token of gratitude for saving the lives of his subjects on board of the Trial.

Capt. Delano is yet absent, but is expected to return to Boston next October; we do not wish, however to delay laying before the public the above particulars, which at the same time that they do honor to our brave fellow citizen are equally honorable to a monarch and a nation who so justly appreciates and rewards the service rendered to humanity.

The glorifying of Delano in the United States Gazette was protested by a correspondent of Poulson's American Daily Advertiser; transcribed below from the Baltimore Telegraphe and Daily Advertiser of April 28, 1806:


From the American Daily Advertiser.

A correspondent has observed, with surprise, your re-publication (from the Gazette of the United States) of an instance of American bravery, which is trumpeted forth as an act of "humanity," deserving of the "tribute of public gratitude."— What is the story? Stripped of those fascinating epithets, which contribute so much to blind even the eyes of the wise, with the dazzling lustre of heroic prowess. The poor Negroes, otherwise called "a Cargo of Slaves" (mark, no lustre here) on board of a Spanish Merchantman" (mark, again, no infamy here) had risen upon their Oppressors—what do I say—their Murderers: but the strife was yet undecided when a captain Delano, of the ship Perseverance, of Boston, falls in with them — boards the vessel — and reinsates the Spaniards in possession of their cargo of Human Live Stock. For this "gallant" action it is not sufficient that "the Government of Chili" have presented "our brave Fellow-citizen," with 8000 dollars; and that "the King of Spain" has directed his ambassador to honor him with "a gold medal," &c. &c. but the good people of the United States are called upon to join in the "tribute of gratitude" so justly due for this "service rendered to humanity." —

For shame — let slave merchants reward their protectors and tyrants honor the bravery that is prostituted in their cause — but let free-born Americans reprobate the Quixotic valour that saved a handful of White Russians, at the expence of two or three hundred Victims of their insatiable avarice, whose only crime was that of rising upon their Oppressors, to regain that freedom with which God and Nature had endowed them.

Delano's 1817 Narrative of Voyages and Travels included a chapter on "the Capture of the Spanish Ship Tryal, at the island of St. Maria; with the Documents relating to that affair."

Amasa Delano, A Narrative of Voyages and Travels via Google Books:
A narrative of Voyages and Travels courtesy of  HathiTrust Digital Library
As documented in the Northwestern-Newberry Edition of The Piazza Tales and Other Prose Pieces, 1839-1860, Delano's Narrative is Melville's main source for Benito Cereno, originally published in Putnam's magazine and reprinted in The Piazza Tales. 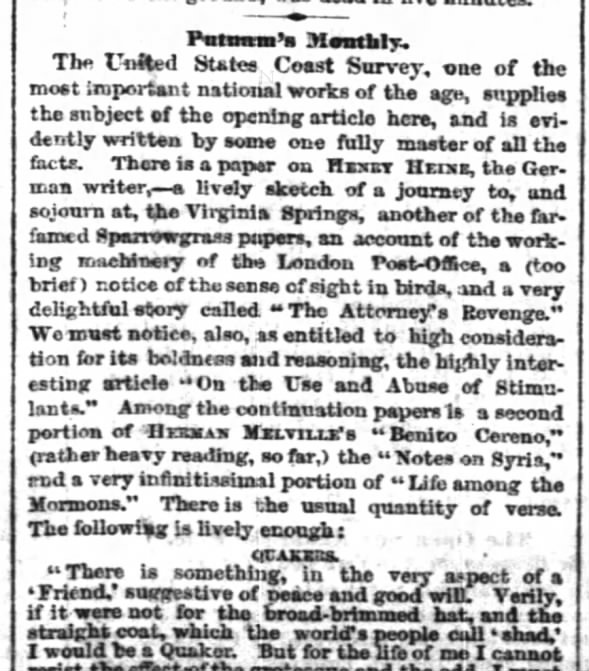 Posted by Scott Norsworthy at 8:41 AM