The steamboat Chancellor Livingston was under the command of popular river captain Joab Center (1777-1857) when Herman Melville, age 4, rode it to Albany on August 20, 1823:

In August 1823 the five children of Allan and Maria Gansevoort, were

The summer before (August 7, 1822), Herman and family left New York for Providence on the steamboat Connecticut, then commanded by Captain Elihu S. Bunker (1772-1847). 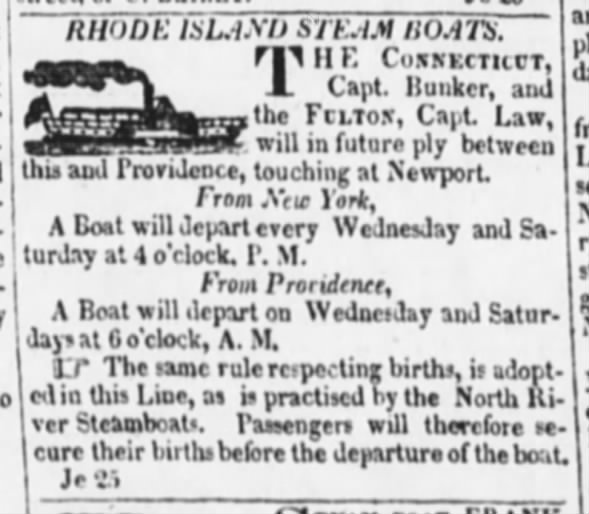 Tue, Aug 6, 1822 – Page 4 · The Evening Post (New York, New York) · Newspapers.com
After a night at Sanford Horton's Globe Tavern aka Golden Ball Inn on the corner of Benefit and South Court Streets they proceeded on to Boston "in a private Carriage" for a long visit with Herman's grandfather Thomas Melvill and family (Melville Log Vol 1, page 11).

What Allan Melvill called "Horton's Tavern" in his diary was formerly Chappotin's Tavern, refurbished and re-opened as the Globe Tavern in June 1822 by Sanford Horton.

More facts about the steamboat Chancellor Livingston can be found with the drawing by Samuel Ward Stanton in American Steam Vessels (New York, 1895). Accessible online courtesy of HathiTrust Digital Library: