Fourteen lines from Herman Melville's Civil War poem The Swamp Angel were quoted in the January 1867 issue of Debow's Review. Attributed to an unnamed but supposedly representative Northern writer ("one of their favorite poets"), Melville's verses on the shelling of Charleston appeared in the first installment of a series titled "Memories of the War." The 1867 Index to Original Articles in Debow's Review specifically credits the first three parts of "Memories of the War" (January-March 1867) to the editor, "Mr. De Bow." Full name: James Dunwoody Brownson De Bow (1820-1867).


CHARLESTON — there she stood, piteously rained upon for nearly two years by shot and shell, a charred and crumbling ruin, yet proudly erect and defiant. No suppliant voice was heard. She had braved the lion and was not appalled by his roar. Mother of the revolution, she never disgraced her progeny. As battery after battery fell that had guarded her approaches, new and stronger ones were reared within. Grimly looking over the bay and over the ruined city sat Sumter, a new Gibraltar, guarded by devoted men under Rhett or Elliot, who, like the Spartans, literally fought under the shadow of the missiles of death which shrouded the sun. The world marveled that amid those ruins a foothold could still be had; but such was found, and the fortress which was wrested from the enemy by blows, refused to return until blows became of no avail. The city's doom had been settled in battle-fields far away.

We visited Charleston in those stirring days. An accidental fire had swept the abodes of her grand old historic personages, and the shot and shell of the foe had crushed and battered down her splendid business quarters, her warehouses and her quays. Frowning cannon looked out from behind embrasures in her beautiful East Bay battery; the paving stones of her streets had been removed for breastworks, and in the vast domain which stretched from what is called Calhoun street to the battery, no inhabitant was to be seen; houses were closed and deserted, or rather broken through and wrecked; nothing visible but an occasional soldier or negro, whilst the angry bolts fell thick and fast. What rejoicing throughout all the land of the foe as the unheralded ministers of death crashed in upon the devoted city, whilst yet its people reposed in confident security. The idea was expressed by one of their favorite poets:

“It comes like the thief in the gloaming,
It comes and none may foretell
The place of the coming—the glaring;
They live in a sleepless spell
That wizens, and withers, and whitens;
It ages the young, and the bloom
Of the maiden in ashes of roses—
The swamp angel broods in his gloom.

“Vainly she calls upon Michael,
(The white man's seraph was he;)
For Michael has fled from his tower,
To the angel over the sea."

In the darkest hour it was written by one of her sons: “Let the vandal work proceed. The bells of St. Michael shall yet ring out merry peals for independence, and the stately mansions of those who claim the blood of the Rutledges, Middletons, and Pinkneys, shall hang out blazing lights from base to attic in honor of the great event.” . . . “The viper bites against a file. He batters Sumter into solidity and strength. He shells a city, the people of which have cheerfully conceded it as a sacrifice for freedom. He confirms them in their faith. He renders them doubly devoted to the cause.” “Ruin my house,” said a prominent citizen to the General, “but I expect you to defend the lot.” No other message came from any quarter.

De Bow's selection from "The Swamp Angel" avoids any direct reference to the blackness of the Parrott cannon that Melville pictures as "a coal-black Angel / With a thick Afric lip." De Bow represents Melville's verse as characteristic of enemy glee, and ignorance as to the depths of Southern resolve. To make "The Swamp Angel" illustrate Yankee rejoicing, however, the Charleston-born editor also had to displace Melville's final stanza and leave out the last two lines:


Who joys at her wild despairing—
Christ, the Forgiver, convert his mind.

As originally published in Battle-Pieces, "The Swamp Angel" ended with a Bible-based appeal for transcendence. Jonathan A. Cook explains:


In the final quatrain, the poet insists that whoever weeps for "the woeful City"--like those who wept for the fallen Babylon (Rev. 18:9-19)--should weep for humanity in general, while whoever feels joy at the city's despair should learn compassion from "Christ, the Forgiver" (79), whose Lord's Prayer specifically enjoined the need for mutual forgiveness.

-- "Melville and the Lord of Hosts: Holy War and Divine Warrior Rhetoric in Battle-Pieces" in "This Mighty Convulsion": Whitman and Melville Write the Civil War, ed. Christopher Sten and Tyler Hoffman (University of Iowa Press, 2019), pages 135-152 at page 146. <https://books.google.com/books?id=F0i4DwAAQBAJ>

In Melville's terms, De Bow would acknowledge the alleged joying but deny the "wild despairing."

A portion of De Bow's article on "Memories of the War" with selected lines from Melville's poem "The Swamp Angel" was reprinted in North Carolina newspapers and perhaps elsewhere.
In De Bow's Review and newspaper versions, Melville's words "Swamp Angel" and "Angel" are printed with lower case initials, as "swamp angel" and "angel." 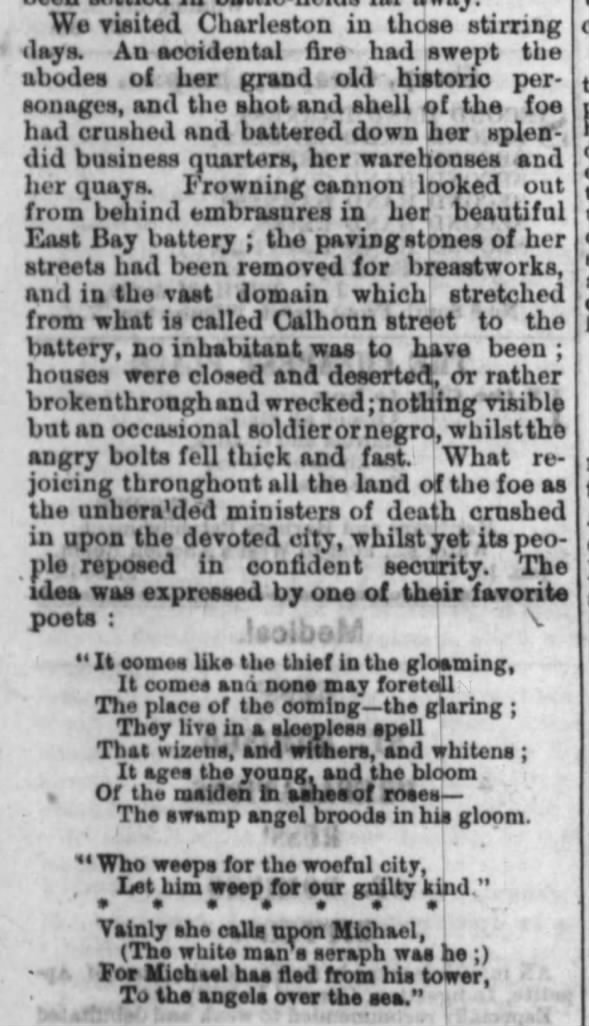 Thu, Jan 24, 1867 – Page 1 · The Daily Journal (Wilmington, North Carolina) · Newspapers.com
In the same first number of "Memories of the War," before the longer selection from Melville's "A Swamp Angel," De Bow also quoted four lines from A Meditation:


The war had indeed in reality opened, and its fratricidal strife was destined to reign for over four years, converting the land into a very pandemonium.

“What thoughts conflicting then were shared
.          .          .
And something of a strange remorse,
Rebelled against the sanctioned sin of blood,
And Christian wars of natural brotherhood.”

The University of Texas copy of this volume (digitized in September 2019) is accessible via Google Books. <https://books.google.com/books?id=j8Ycj0m8RagC&pg=PA4&dq#v=onepage&q&f=false>

The quoted lines from "A Meditation" do not appear in the abbreviated newspaper reprintings cited above.

Later episodes in the "Memories of the War" series were posthumously published in Debow's Review after the editor's unexpected death on February 27, 1867. 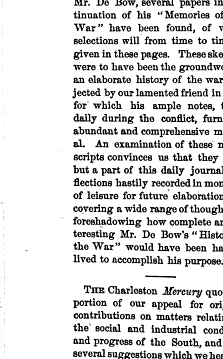