Here's more about Hart Leverett Murray (1798-1887), captain of the Swiftsure when that Hudson River steamboat brought Allan Melvill and his son Herman (age 11) up to Albany from NYC in October 1830. Towing the Melvill family's furniture on the freight barge Ontario, as demonstrated in the previous post on the Swiftsure Line in 1830.

Starting in 1824 as Capt of the Hudson River steamboat 'Swiftsure' he continued to be a popular captain of the Hudson River boats for 27 yrs, contemporaneous with Alfred Vantvoord, Isaac Newton and Dean Richmond. He was appointed Harbor Master of the Port of New York by Gov Morgan in 1860 and retired from active life in 1867. He was a resident of Albany for 28 yrs, and earnest anti-slavery man and a member of the Baptist church for more than 60 years; a devoted husband and valued citizen.

In Albany, Murray lived at 60 Westerlo Street. That's according to Joel Munsell's Albany Annual Register for 1849-50 where his name "Murray H L" appears in the alphabetized list of fifteen Albany "Skippers." Same address for "skipper" Murray in the 1853-4 Albany City Directory. In Brooklyn Hart L. Murray resided at 12 Cheever Place. 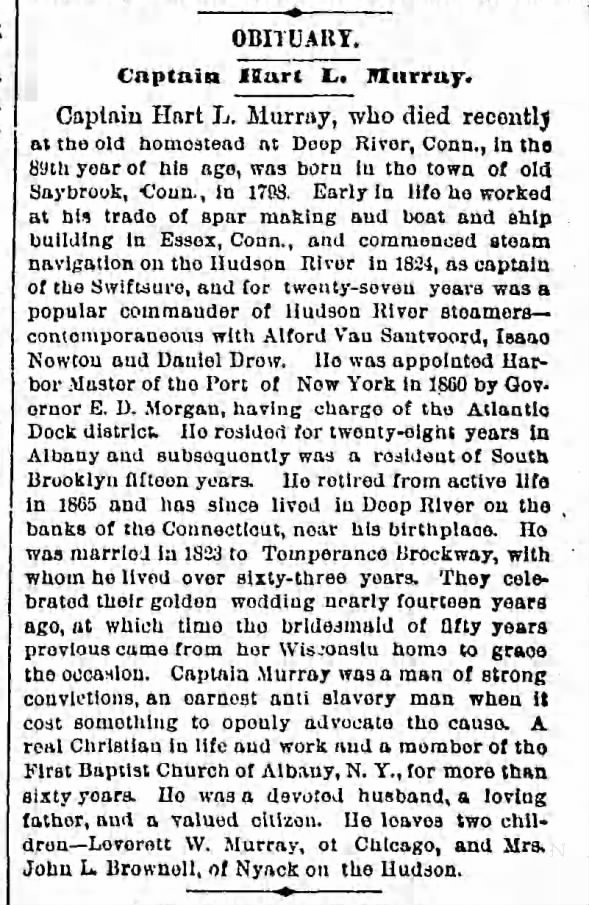 Captain Hart L. Murray, who died recently at the old homestead at Deep River, Conn., in the 89th year of his age, was born in the town of old Saybrook, Conn., in 1798. Early in life he worked at his trade of spar making and boat and ship building in Essex, Conn., and commenced steam navigation on the Hudson River in 1824, as captain of the Swiftsure, and for twenty-seven years was a popular commander of Hudson River steamers--contemporaneous with Alford Van Santvoord, Isaac Newton and Daniel Drew. He was appointed Harbor Master of the Port of New York in 1860 by Governor E. D. Morgan, having charge of the Atlantic Dock district. He resided for twenty-eight years in Albany and subsequently was a resident of South Brooklyn fifteen years. He retired from active life in 1865 and has since lived in Deep River on the banks of the Connecticut, near his birthplace. He was married in 1823 to Temperance Brockway, with whom he lived over sixty-three years. They celebrated their golden wedding nearly fourteen years ago, at which time the bridesmaid of fifty years previous came from her Wisconsin home to grace the occasion. Captain Murray was a man of strong convictions, an earnest anti slavery man when it cost something to openly advocate the cause. A real Christian in life and work and a member of the First Baptist Church of Albany, N. Y., for more than sixty years. He was a devoted husband, a loving father, and a valued citizen. He leaves two children--Leverett W. Murray, of Chicago, and Mrs. John L. Brownell, of Nyack on the Hudson. --Brooklyn Daily Eagle, May 17, 1887.

Posted by Scott Norsworthy at 11:57 AM