Numbers 1-5 in the American Steam Vessels series of drawings by Samuel Ward Stanton are collected in one volume at the University of Michigan Library, now Google-digitized and accessible online courtesy of HathiTrust Digital Library.

Pertinent history of the Swiftsure is given under Stanton's picture of the "SWIFTSURE 1825 pulling safety barge LADY VAN RENSSELAER":


Built at Brooklyn, N. Y., wood, 265 tons, by C. Bergh for A. Van Santvoord's Steam Navigation Co. for route between New York and Albany. SWIFTSURE and COMMERCE usually had in tow, for those afraid of steamboats, so-called safety barges connected to them by swivelled platforms over which passengers could walk. Practice discontinued after 1829 due to resulting slowness, and barges converted for freight. SWIFTSURE abandoned in 1856. -- Steamboats of the River Hudson, American Steam Vessels series no. 5 (Meriden Gravure Company, 1965). 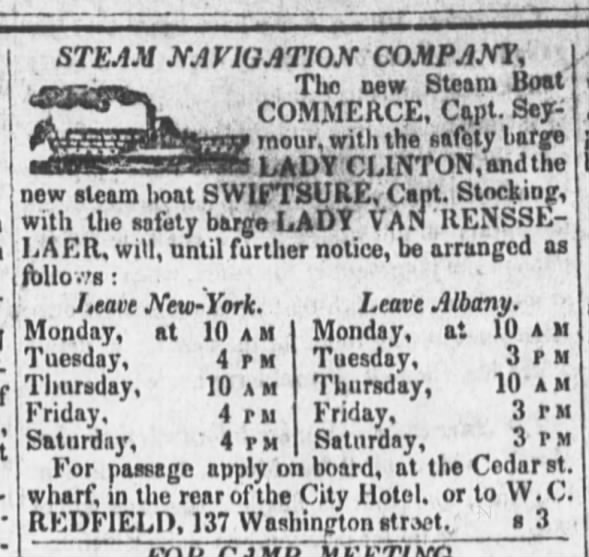 Tue, Sep 6, 1825 – Page 1 · The Evening Post (New York, New York) · Newspapers.com
Samuel Ward Stanton died at sea on April 12, 1912 in the Titanic disaster. Stanton's early Swiftsure drawing did not appear in American Steam Vessels. His model is not identified exactly, but in the 1895 Preface Stanton avowed that his illustrations were all "drawn from reliable sources" such as "early prints, lithographs, drawings and paintings, mostly in the possession of private parties or steamboat companies." Also acknowledging his use of old newspapers and hand-bills, Stanton further specified that he had drawn

For representations of some early Hudson River steamboats including the Commerce, DeWitt Clinton, and Highlander, Stanton credited "the pictures of Mr. James Bard, a gentleman who began this class of work before 1830." 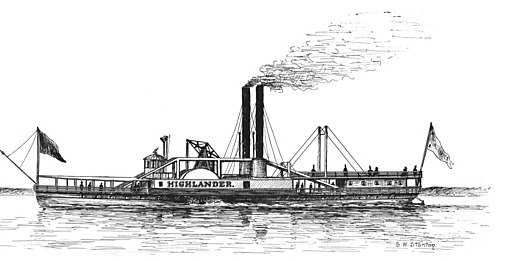 Shown above via Wikimedia Commons, the image of the steamboat Highlander from American Steam Vessels by Samuel Ward Stanton is also accessible online courtesy of HathiTrust Digital Library

and Google Books
Stanton describes the Highlander, built in 1835 for the Hudson River, as

"one of the best boats on the river when she first came out, as well as one of the fastest. She ran on the Newburgh and New York line until the Thomas Powell appeared, 1846. She was then used as an excursion boat."  --American Steam Vessels 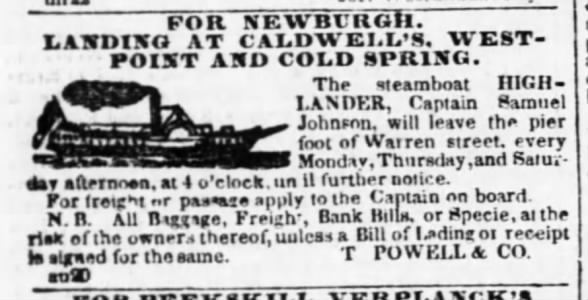 Wed, Oct 9, 1839 – Page 4 · The Evening Post (New York, New York) · Newspapers.com
In Redburn (1849) Herman Melville gave the name "Highlander" to the merchant vessel that takes the green hero Wellingborough Redburn across the Atlantic and back. The Highlander in Redburn is a fictionalized version of the real St. Lawrence which did in fact sail to Liverpool in June 1839 with Herman Melville on board. Melville shipped as an inexperienced "boy," although he would celebrate his 20th birthday in Liverpool, waiting to sail home. As William H. Gilman reported in Melville's Liverpool Trip, Modern Language Notes Vol. 61, No. 8 (December 1946) pages 543-547, the crew list of the St. Lawrence had Herman Melville enrolled under the name "Norman Melville."

Posted by Scott Norsworthy at 9:18 AM