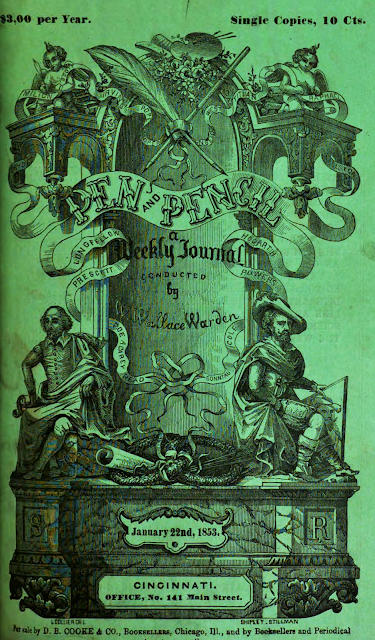 Edited by William Wallace Warden (1821-1890), The Pen and Pencil was an ambitious weekly journal of literature and art, published in Cincinnati, Ohio and Chicago, Illinois. Short-lived, Warden's venture lasted less than seven months: the rare volume 2 held by the University of Iowa and accessible online courtesy of Hathi Trust Digital Library ends with the third number of July 16, 1853.

At the outset Warden confessed his inexperience in a letter to Rufus W. Griswold, written at 2 a.m. on December 27, 1852 and accessible online via Digital Commonwealth:


"I am young and have much to learn in literary matters, and I am anxious to hear of my imperfections."

In the same letter, Warden asks Griswold to forward the conclusion of a "tale" by Alice Cary slated to appear in the first number of his new literary journal. A sketch by Alice Cary (spelled "Carey") titled "The Past" was published in Pen and Pencil on January 1, 1853, serving as a kind of preface to the serialized tale of Charlotte Ryan that began in the fifth number (January 29, 1853) and concluded in the eighth (February 19, 1853). The introductory sketch and tale of "Charlotte Ryan" were both included in Alice Cary's Clovernook or Recollections of Our Neighborhood in the West, Second Series (New York: Redfield, 1853). In his letter to Griswold, Warden also wonders how much to pay Phoebe Cary for a poem of "six or seven verses" he wants to publish. Phoebe Cary's poem My Baby Brother (in six stanzas, "Written for The Pen and Pencil") appeared in the January 22, 1853 issue of Pen and Pencil, credited to "Peoebe Carey."

Below, a friendly puff in the Louisville Daily Courier:

The first volume of Warden's Pen and Pencil contains several brief references to Herman Melville. The earliest Melville mention in Pen and Pencil occurs in the second number (January 8, 1853) in an unsigned essay on "The Teeth":

Indeed, the natives of all savage and unsurgeoned countries, have invariably fine teeth. Having healthy constitutions, they have healthy teeth. Speaking of the inhabitants of the Marquessas, Herman Melville says,—"Nothing in the appearance of the islanders struck me more forcibly than the whiteness of their teeth." --Pen and Pencil - William Wallace Warden


We must here conclude our subject, but not without recommending our readers to peruse the great Whale Epic of Herman Melville--certainly one of the most curious, instructive, imaginative, and graphic books of the present day. --Pen and Pencil, February 26, 1853.

A more extended notice of Herman Melville in Pen and Pencil occurs in a review of The Captive in Patagonia by Benjamin Franklin Bourne. The Cincinnati reviewer, presumably Warden, tried to contrast South American Indians as portrayed by Bourne with Melville's romanticized South Sea islanders. Besides Typee and Omoo, the reviewer was also reminded of Poe's Narrative of Arthur Gordon Pym.


On the whole, the " Captive" is a sort of dismal Typee or Omoo, though the subject is very unattractive compared to those in which Herman Melville revelled of old. The Patagonians are too stupid and brutal to be interesting in any way. We hope no literary man will go any farther South! A book on Terra del Fuego might be too much for our nerves.

It seems to us that "the natives " are very much alike in all books of travels, that is to say they are savages in appearance, and in other respects incomprehensible. However, we would rather meet the swimming girls of Typee than the greasy thieves of Patagonia, even between the covers of a volume.

Somehow, the book before us reminds us of Poe's Gordon Pym— a tale, by the way, not included in the collected works of that writer. Why, we know not. --Pen and Pencil - April 23, 1853

In the May 21, 1853 issue Warden criticizes promotion of "hoaxes" in Putnam's Monthly Magazine, instancing Horace Greeley's unsigned article Modern "Spiritualism" in January 1853, and another the next month on the "Bourbon Question" by Rev. John H. Hanson titled, Have We a Bourbon Among Us?  Protesting the supposed dearth of good literature in English, Warden jokes,


"We cannot live on one romance by Hawthorne, and half a one by Melville per annum" --Pen and Pencil - "Editor's Port-Folio."

May 1853 is too early for a contemporary critic to be talking about Melville's magazine fiction, since his first published effort in that line, Cock-A-Doodle-Doo! would not appear in print until December 1853, in Harper's magazine. Half a romance by Melville could describe either Moby-Dick (1851) as half-romance, half-Cetology, or Pierre (1852) as half-romance, half-metaphysics.

Later on in the same editorial of May 21, 1853, Warden attacks "determined flunkeyism" in recent Harper's articles on on Napoleon Bonaparte (by John Abbott, mis-identified by the Cincinnati editor as Jacob Abbott) and Louis Napoleon (with particular reference to France—Her Emperor in the April 1853 issue of Harper's New Monthly Magazine). In the course of criticizing "toadyism" in the exaltation of French emperors past and present, Warden alleges that Harper's routinely published flattering articles paid for by the contributor or another sponsor.

In a previous "Editor's Port-Folio" column on April 16, 1853, Warden examined the sorry state of American literature in "an age of literary mediocrity." Warden excepted Hawthorne and Melville as

That April 16, 1853 column is worth a closer look, as Warden helpfully identifies various contributors to New York newspapers and magazines. Charles Seymour, for example, gets named as author of "Pavement Sketches" and "School-house Sketches"; as former co-editor of The Lantern and Yankee Blade; and as current literary editor of the New York Daily Times, edited by Henry Raymond. Decades later, some of these associations would be independently confirmed in "Reminiscences of an Old New Yorker" (serialized in Frank Leslie's Sunday Magazine). 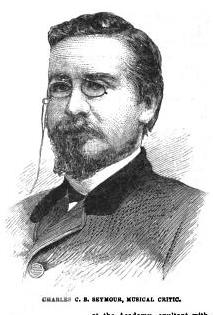 
For my part, I have never ceased regretting the failure of the adventure, which might have made me a Herman Melville, or a Sinbad the Sailor, instead of a poor devil of a —; well, fill up the blank as your wisdom dictates. We are in, and somebody must be secretary of state in a country. But mum’s the word!
--School-House Sketches, Running Away

One colleague of Charles Seymour's on the editorial staff of the New York Daily Times was Fitz-James O'Brien, described by Warden as "a brilliant critic, a pleasing poet, and a witty essayist." O'Brien wrote a couple of major review essays on Melville for Putnam's magazine in 1853 and 1857, as long known in Melville scholarship.

Not so well known today: the "City Hall Bell-Ringer" of the New York Daily Times--identified as "Mr. Weldon" by Warden, in fact Charles Welden (d. 1861); and Frank Tuthill (1822-1865) the physician and city news editor, later associated with the San Francisco Evening Bulletin and author of The History of California.

William Wallace Warden moved to Washington D. C. in 1862 and was there employed as Washington correspondent of the Cincinnati Enquirer. Eventually Warden became a private secretary to President Andrew Johnson, serving until the end of Johnson's administration. 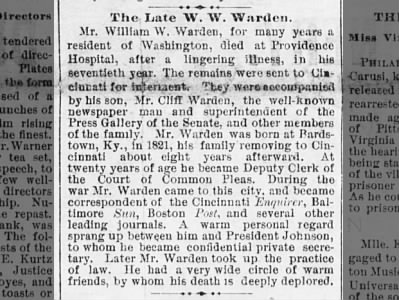 Published shortly before Warden's death, an article by M. P. Handy in the Philadelphia North American gave away the pen names over which William Wallace Warden contributed insider views, while employed as Jonson's confidential secretary and afterwards:
In Cincinnati Warden wrote "over the nom de plume of 'Ubiquitous Allabout."


The fullest biographical notice of Warden I have found so far appears in The Weekly Law Bulletin and Ohio Law Journal, Volume 23 (April 14, 1890).

Back to Pen and Pencil: in the June 18, 1853 number Warden recounts a visit to Louisville on the steamboat Jacob Strader. Enjoyment of the breeze and scenery from the cabin roof prompts an islamicist reverie (with peris, houris, and other features of the cultural discourse examined by Timothy Marr in The Cultural Roots of American Islamicism) and a glance at Melville's Mardi:


Now what can a poetical minded lounger, an easy going Lotus-eater, require more than pleasant scenery and pretty faces to look at, and a nice cool breeze blowing away all his feverish cares and troubles, as the breath of the houris blows the memory of sorrow from the brows of the faithful in the paradise of Mohammed, for which, and other particulars, see Abubeker & Co., and the Arabian commentators. We had not been cool for a fortnight, and at that moment would not have given that breeze for a middling sized empire in "Mardi," or any other out of the way region.
--Pen and Pencil - June 18, 1853

Posted by Scott Norsworthy at 4:41 PM