The Apple-Tree Table, reprinted from Putnam's in the Troy Daily Times 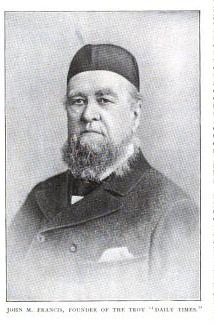 Melville's short fiction The Apple-Tree Table was first published anonymously in the May 1856 issue of Putnam's Monthly Magazine. On Saturday, May 10, 1856 the Troy Daily Times reprinted the story on page 4 "from Putnam's Monthly for May," correctly giving its full title:

John M. Francis (1823-1897) was then owner and editor of the Daily Times which he founded in 1851, according to The Illustrated American for November 29, 1890; and the 1897 collection of posthumous tributes, In Memoriam: John M. Francis.

On page 2 of the Troy Daily Times for May 10, 1856, a separate editorial column (by Francis, I'm presuming) commends "The Apple-Tree Table" as a "good story" with a "good moral." The Troy editor's published remarks constitute an unusually elaborate notice for one of Melville's magazine pieces. In Racine, Wisconsin the Weekly Advocate (April 30, 1856) approved "The Apple-Tree Table" as "a piquant article" in the new number of Putnam's. The New York Times (May 1, 1856) gave it a little longer glance, evoking Poe:


"There is a story (rather disappointing at the end) relating to mysterious rappings in an apple-tree table, which reminds us of POE, in the minuteness of its touches."

In Troy, John M. Francis praised the craftsmanship of "The Apple-Tree Table" without naming Melville who (as conventional) was not identified as the author in Putnam's magazine:


"It is well calculated to excite the attention and keep up the interest of the reader by the ingenuity and adroitness with which the narrative is conducted."

The Troy Daily Times was friendly to Melville from the start. Announcing Moby-Dick for sale in November 1851, the ad for Willard's News Room promised that

Francis even had a good and very early word for Melville's Pierre:

"This is one of the best productions of the illustrious author of "Typee." It is issued in cheap publication form, and will have a great run."  --Troy Daily Times, July 31, 1832

The Troy reprint and notice of "The Apple-Tree Table" are not cited in the Northwestern-Newberry edition of The Piazza Tales and Other Prose Pieces, 1839-1860 which indicates "no later printing in Melville's lifetime" (page 720). From the Troy Daily Times; found in the great archives of Thomas M. Tryniski at Fulton History:

A Story with a Moral.


A good story will be found on our fourth page. It is well calculated to excite the attention and keep up the interest of the reader by the ingenuity and adroitness with which the narrative is conducted. The moral is excellent. It is just such trifling incidents as these, simple enough if we would only coolly investigate, but rendered mysterious by our own fears and ignorance, that give life and being to "spiritualism" and the whole spook family of "ghosts and goblins damned." No matter of fact woman, with strong nerves and good sense, like the lady in this veritable Tale, ever saw a ghost, or went crazy about "spirit-rappers." It is the "Miss Julias," both male and female, who, governed by their superstitious fears, take it for granted without rational reflection, that spirits linger about under tables, and in cellars and ceilings, rapping out nonsense and herding with puppies and vermin. If we believed that spirits were so degraded as to lead such a skulking, miserable, vagabond existence, we should try to rid ourselves of the nuisance by administering "hop-up" and "rat-exterminator." But enough of this. Read the story.
--Troy Daily Times, May 10, 1856

Melville's story "The Apple-Tree Table" was reprinted from Putnam's magazine in at least one other contemporary newspaper:
Related posts:

Posted by Scott Norsworthy at 11:56 AM