Notices of "Cock-a-doodle-doo!" in Louisville and Nashville

This admirable magazine has commenced its eighth volume, and the first number of that volume is the best specimen of magazine literature and art that has appeared in this country. This number is entirely original, and an edition of one hundred and thirty-five thousand copies is demanded by the increasing popularity of the work. Two thousand copies are sold in this city….

There is a singular paper in this number, entitled "Cock-a-doodle-doo; or, the crowing of the noble cock Beneventano." We thought for a considerable period of the time devoted to reading it, that some of the gentlemen engaged in the foreign poultry trade, had discovered a breed that was to kill off "Chittagongs," "Brama Poutras," "Cochin Chinas," "Plymouth Rocks," "Dorkings," "Hamburgs," "Polands," and all the rest, and had sought Harpers large circulation to make known to all English civilization the qualities of the breed. But the tombstone at the end revealed the mystery, and we found, to steal an idea from Waldo Emerson, that the cock Beneventano was a representative gentleman, and as such altogether worthy of the space he occupies in Harper. Reader, solve the mystery of the allegory, bow to its teachings, and, verily, great will be your reward.

Edited by Walter N. Haldeman, as discussed in the earlier post on
The Nashville notice of "Cock-a-doodle-doo!" similarly described it as an "allegory": 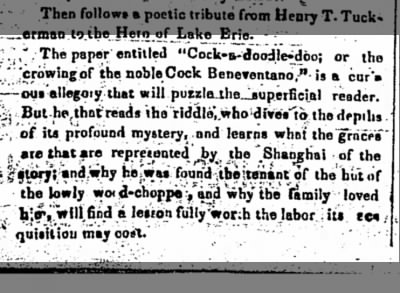 The paper entitled "Cock-a-doodle-doo; or the crowing of the noble Cock Beneventano," is a curious allegory that will puzzle the superficial reader. But he that reads the riddle, who dives to the depths of its profound mystery, and learns what the graces are that are represented by the Shanghai of the story; and why he was found the tenant of the hut of the lowly wood-chopper, and why the family loved him, will find a lesson fully worth the labor its requisition may cost.  --Republican Banner, and Nashville Whig, December 5, 1853

As the masthead for this number indicates, the Republican Banner and Nashville Whig was published by W. F. Bang and edited by Allen A. Hall.

Posted by Scott Norsworthy at 6:09 PM