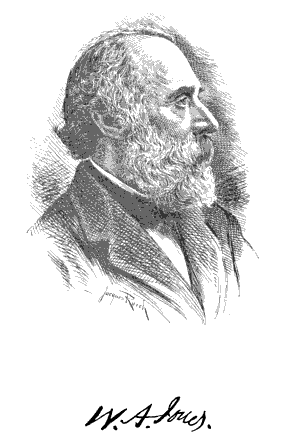 Frank Luther Mott in A History of American Magazines rated "the literary criticism of Jones" as "one of the best features of Arcturus," the adventurous journal founded by Evert A. Duyckinck and Cornelius Mathews. After its early demise, William Alfred Jones wrote for numerous periodicals including both the Democratic Review, the American Whig Review, and the Church Record. Jones's long and highly favorable review of Clement C. Moore's Poems first appeared in the July 17, 1847 issue of the Literary World, then being edited by Charles Fenno Hoffman.


"holds the first place, and is one of the few living graduates of the latter years (1798) of the past century; a refined and classic poetical writer of the school of Goldsmith and Cowper, with a mingled happy vein of delicate humor and pathetic sentiment."
--The First Century of Columbia College - 1863

Jones's 1847 review of Poems by Clement C. Moore was reprinted (minus the excerpt of Moore's preface to his children) in the 1849 collection Essays Upon Authors and Books; and again in the 1857 Characters and Criticisms, Volume 2.

This is a pure volume of refined and classic poetry, in its genuine sense. Not to be sure in the highest sense, for these pages include none of the higher aspirations of the muse. There is nothing dramatic nor epical; no Pindaric strains, no Miltonic fervor and sublimity, nor the grand sweep of Dryden's glorious verse, but there is still a great deal that is truly excellent, nay admirable, both positively and negatively.

To begin with the latter cold praise, (which we do not mean to be so considered, in these days of extravagance and crudity, in poetical attempts), there is not a particle of affectation, cant, false pretence, or straining after effect, in the whole collection. Artistically and morally, it is one of the most honest books we ever read. The author does not once feign a sentiment or court popular prejudice; he is utterly without duplicity or ostentation.

It is true, circumstances may have had something to do with this. Dr. Moore, the son of the excellent Bishop Moore, of New York, himself not only a pure and refined character, but superadding to the accomplishments of the gentleman the nobler character of a benevolent Christian philanthropist, has been most fortunately placed as well for the culture of refined taste as for the development of individual character.

The author of this volume (we add this for the benefit of those who are ignorant of his name and position) is at present a professor* of the General Theological Seminary of the Episcopal Church, giving his services for the benefit of the Institution (to which he presented the grounds on which the buildings stand, with the beautiful adjacent green) and the Church. The poems here collected, are the fruit of leisure hours, and form the expression of personal feelings. They are mostly occasional poems: a description of verse often styled fugitive, but not assuredly to be such in this instance, and we risk little in predicting a permanent reputation for them and their author.

Refinement is their characteristic; not weakness nor sentimentality, but fine sense, elegance, graceful turns of pleasantry, natural and pleasing sentiment, genuine pathos. Gifford's highly praised verses to his Anna are weak and puerile compared with the verses to the Poet's Children, to his late wife, and on the death of a favorite daughter.

The purest moral feeling and polished versification are also to be remarked as prominent traits of Dr. Moore's poetry. Neither Bryant nor Dana is more careful in the musical structure of his verse; neither of these finished poets is more deserving of being read, for elevation and high aims. Yet there is no assumption on the part of the poet. From his natural elevation, and from a religious tone of character, surrounded by admiring friends and devoted children, our author writes naturally either as a moralist or as a companion, when he writes for others: it is different when he pours out the full tide of his own feelings, in the purest elegiac verse, far more touching than the verses of Hammond, whom it was once the fashion to call the English Tibullus. In humor, too, our author has been quite successful. His visit of St. Nicholas, we believe, has been regularly reprinted for some years past in certain of our city journals; and together with the two exquisite poems of "Lines to my Children, with their Father's Portrait," and " Lines from a Husband to his Wife," are to be found in most of the collections of American poetry.

Dr. Moore's poetical talents incline him to domestic themes and incidents and characters; he is a disciple of Cowper and Goldsmith; yet by no means an imitator of either. His vein is original: his manner is his own—still, his admiration for classic models may guide his taste and control his pen. Both of these fine poets might be proud of such a follower, each of them would have gloried in such a friend.

We can see nothing in this writer of the ordinary sins of American versifiers, no plagiarism, no imitation, no morbid feeling, no rhetorical flourishes, no transcendentalism.

The poems are occasional; and so far, instead of being worthy of rejection on that score, they are the natural effusions of the writer's heart and fancy. After the highest walks of song, the drama and the epic, (only worthy, when admirable), what forms of verse are so enduring and so popular, as the songs and ballads which make up the popular staple of every national poetic literature? These are truly occasional, spontaneous, individual. It is in such poems the poet writes his life, gives his experience: proclaims his joys and praises: embalms a friend or an enemy; deepens a sentiment or renders his description most vivid. The regular forms of poetry seem strained and elaborate compared with this. They want, apparently, the impulse which gives truth to these, and which infuses its life into them. Other verse is more reflective or philosophical: this gives the essence of the art; the true poetic afflatus.

Much of our American verse (the best portion) is lyrical Not always verses for music, nor drinking songs, nor effusions of gallantry, though we can point to a rich anthology of that class. But a lyrical spirit runs through much of the serious poetry of Bryant, all of Halleck's and Brainard's; and most of the productions of Dr. Moore's muse are essentially lyrical, although they often run into the more purely elegiac form— of this, the following poems are more especially to be remarked, in confirmation of our criticism.

The Organist, a spirited address in epistolary guise, the Wine Drinker and the Water Drinker, two capital poems, that would have delighted Green, (author of the Spleen,) and much after his manner; and that must gratify every rational man, as well as lover of fine verse; and the exquisite lines To my Daughter on her Marriage, the equally admirable address to Southey, which, with the fine poems to the Poet's Children and Wife, we have referred to before, emphatically stamp our Poet's mastery of the pathetic in domestic scenes. The parallel may seem strained, but we are apt to compare these rare gems with such a poem as Cowper's Address to his Mother's Picture; and we think our bard loses not a whit by the comparison. With Goldsmith, our poet is a model of simplicity and natural grace, which shine out in the lightest copy of verses. A few of the pieces in this volume of this kind and exactly suited to the occasion that produced them, may not be adequately appreciated by the common reader, but none can fail to be impressed (who have a heart to feel or a taste sufficiently cultivated to appreciate our author's delicacy) with the poems we have mentioned above. They are, truly, classical poems.

[Omitted in the later book versions:] The preface is a manly and judicious one, instinct with the uncommon union of wise prudence and natural feeling. It is the best criticism, and forms a most appropriate commentary on the volume; as modest and discriminating as the poems that succeed are truly excellent. And as such we transcribe it for the benefit of our readers.... --William Alfred Jones on Clement C. Moore

Here's another contemporary review of Moore's 1844 collection of poetry, brief but equally appreciative:


C. C. MOORE'S POEMS.—The "Poems of Clement C. Moore, L. L. D.," have been published in a handsome printed duodecimo by Bartlett & Welford, of this city.

Professor Moore is the author of the popular little poem styled "A visit from St. Nicholas," which forms a part of this collection. The first and largest in the volume is entitled "A Trip to Saratoga," and is a domestic narrative, agreeably and unambitiously told, in, for the most part, very easy verse. The lines addressed "To my children after having my portrait taken for them," possess a certain quiet pathos and tenderness.

Posted by Scott Norsworthy at 9:48 AM