Herman Melville wrote three letters to Nathaniel Hawthorne regarding Melville's idea for a story based on the real-life misfortunes and heroic endurance of a Falmouth widow named Agatha Hatch Robertson. Melville's first "Agatha" letter dated August 13, 1852 is extant among the Herman Melville Papers at Houghton Library, Harvard University. It's a 21st century blessing for Melville students to be able now to see and study images of the August 13, 1852 letter online via the Harvard Library Viewer.

The August 13, 1852 letter was reprinted in the 1929 New England Quarterly article by S. E. Morison, Melville's "Agatha" letter to Hawthorne. Early, essential scholarship in print also includes the 1946 article in ELH by Harrison Hayford on The Significance of Melville's "Agatha" Letters; and Patricia Lacy's 1956 essay in The University of Texas Studies in English on The Agatha Theme in Melville's Stories. Some landmarks of more recent scholarship are the Historical Note by Merton Sealts in the Northwestern-Newberry edition of Melville's Piazza Tales and Other Prose Pieces, 1839-1860; the 1990 article in American Literature by Hershel Parker, Herman Melville's The Isle of the Cross: A Survey and a Chronology; and the 1991 re-examination by Basem L. Ra'ad, "The Encantadas" and "The Isle of the Cross": Melvillean Dubieties, 1853-54.

In print, transcripts of all three "Agatha" letters are available in the 1993 Northwestern-Newberry edition of Melville's Correspondence. Online, Heyward Ehrlich at Rutgers gives the Agatha letters among other electronic texts of Selected Melville Letters. Also transcribed with other of Melville's Letters to Hawthorne at the venerable Life and Works of Herman Melville website.

Melville's third "Agatha" letter I guess remains unlocated. Julian Hawthorne published it in his 1884 biography Nathaniel Hawthorne and His Wife: 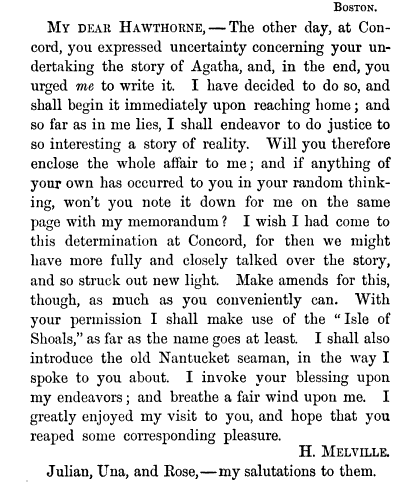 Introducing the undated letter (which must have been written between the 3rd and 13th of December 1852), Julian Hawthorne reports that Melville personally told him, "it was a tragic story, and that Hawthorne had not seemed to take to it."

Posted by Scott Norsworthy at 10:29 AM