Evert A. Duyckinck on Clement C. Moore: "one of the best of men"

Besides, has not Weir painted the scene? and has it not been described by one of the best of men in most exquisite rhymes? --Evert A. Duyckinck 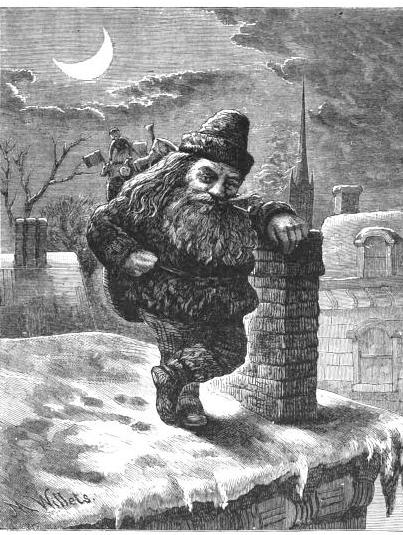 There were several national or religious festivals kept by the Dutch in New Amsterdam: Christmas, New Year's Day, Paas or Easter, Pinxter at Whitsuntide, and Santa Claus or St. Nicholas Day. Some of the peculiar Dutch honors of the last have been transferred to Christmas; particularly the visit of St. Nicholas, who, to the wondering children of Manhattan, on the eve of the sacred day, still, as of yore, a burly, benevolent figure, clad in his ancient furry habiliments, a pipe in his month, a capacious, well-filled hamper of toys on his back, rides in his airy sleigh, swiftly borne by his reindeer-team, over the roofs of the houses, descending, spite of narrow flues and modern contracted chimneys, to fill the stockings suspended, in expectation of his gifts, at the mantel-corner. The faith in the old legend of St. Nicholas, patron of the Manhattoes, would, with other superstitions of the past, doubtless have died out long ago were it not invigorated by these perennial gifts and bounties. There is practically no discrediting a belief which is backed by such unfailing beneficence. We, "children of a larger growth," hoodwink our perceptions and act upon it every day in our intercourse with society and estimate of character, feigning to believe in more doubtful virtues than those of the boy-saint. Besides, has not Weir painted the scene? and has it not been described by one of the best of men in most exquisite rhymes?—

"The moon on the breast of the new-fallen snow
Gave the lustre of midday to objects below,
When, what to my wondering eyes should appear,
But a miniature sleigh and eight tiny reindeer.
With a little old driver, so lively and quick,
I knew in a moment it must be St Nick.

* * * *
And then, in a twinkling, I heard on the roof
Tho prancing and pawing of each little hoof—
As I drew In my head, and was turning around,
Down the chimney St. Nicholas came with a bound,
He was dressed all in fur, from his head to his foot,
And his clothes were all tarnished with ashes and soot;
A bundle of toys he had flung on his back,
And he looked like a peddler just opening his pack.
His eyes—how they twinkled! his dimples how merry!
His cheeks were like roses, his nose like a cherry!
His droll little mouth was drawn up like a bow,
And the beard of his chin was as white as the snow:
The stump of a pipe he held tight in his teeth,
And the smoke it encircled his head like a wreath,
He had a broad face and a little round belly,
That shook when he laughed, like a bowlfull of jelly." *

This, is the children's saint of the Manhattoes, fixed in his great lineaments for all time.

In their 1855 Cyclopædia of American Literature, co-editors Evert A. Duyckinck and his brother George L. Duyckinck had accorded Moore a similarly generous treatment, likewise informed by some personal knowledge of the man being described:


Professor Moore has lightened his learned labors in the seminary by the composition of numerous poems from time to time, chiefly expressions of home thoughts and affections, with a turn for humor as well as sentiment, the reflections of a genial, amiable nature. They were collected by the author in a volume in 1844, which be dedicated to his children. Though occasional compositions they are polished in style....
--Cyclopædia of American Literature


He was a man of rare beauty and simplicity of character, kindly disposed and generous to a fault. Upon his death, the faculty of the seminary he had so faithfully served passed resolutions declaring, "We recognize in him one whom God has blessed with selected gifts; warmhearted in friendship, genial in society, kindly and considerate to all; possessed of fine literary tastes, poetic instincts and expressiveness, and of cheerful humor withal; at the same time well accomplished in severer studies and resolute for more laborious undertakings, as his learned works in Hebrew grammar and lexicography distinctly testify."


... Lady Lilford, formerly Miss Theresa Moore, the daughter of the late Clement C. Moore, who will be remembered by all old New Yorkers as one of the most estimable, genial, and popular men of his day. He wrote the Christmas poem familiar in every nursery and school room, beginning, "'Twas the night before Christmas," and was well known in both the literary and the social world. 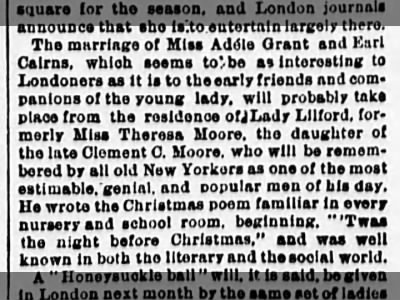 Posted by Scott Norsworthy at 9:10 PM