Gansevoort's thoughts on elephants after riding one at the menagerie 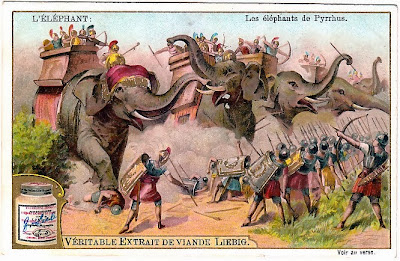 … At 8 o’clock Alex. W. Bradford and myself went to the Menagerie and were very agreeably entertained. I noticed pa[r]ticularly the very easy, quick trot of the one humped camel. A perfectly White Raccoon taken in South Carolina. The Tiger cat or Hunting leopard that the Asiatic princes carry on their saddles when hunting, a most beautiful animal. They had a gigantic saddle for the male elephant which would comfortably accommodate six persons, my friend & self got on it, the elephant kneels down to receive its load, and has a very pleasant gait a kind of long walk. In ancient times they must have been a terrible weapon in the hands of an army, by giving loose rein to Imagination I could almost fancy to myself the army of Pyrrhus King of Epirus when he invaded the Roman Territory, what an awful, fear inspiring sight to see 100 Elephants drawn up in line, each carrying 5 or 6 armed men on his back, and ready to tread down, fairly by mere animal weight to crush the opposing ranks of Roman citizens. It is not strange that when the Romans first saw these huge masses of animated clay, drawn up in battle line against them, that they experienced fear—nor is it strange that they, the elephants, turned the scale of victory in favor of their daring, gallant leader. They feed the elephants hay entirely. The Polar bear experienced the pleasurable feelings arising from the unintermitted discharge for two hours of a stream of cold water about ½ inch in diameter. This I presume is done to keep his coat white, as I presume his majesty would not tolerate the exercise of a brush & manual labor on it.

After leaving the menagerie Alexander came to my mother’s and remained till ½ after 11 o’clock. He strongly advised me to take up a course of reading, evenings after I come home Kent’s Commentaries, & Blackstone.

The passage above is excerpted from Jay Leyda, "An Albany Journal by Gansevoort Melville" in the Boston Public Library Quarterly 2.4 (October 1950). 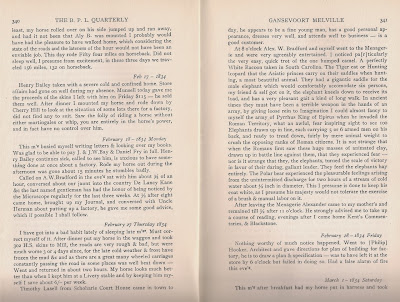 Introducing the 1834 journal fragment, Leyda makes a number of suggestive connections, for example:

Look also in Reginald Dalton, particularly in those opening chapters admired by Gansevoort ("The character given of Reginald before he leaves home, and the manner in which he is situated is true to nature, and almost inimitable in description—“), for an artistic ancestor of the character and situation of Herman Melville’s Pierre. It is startling for readers of Pierre to hear Reginald Dalton's heroine strum a guitar and to read of betrayed "Lucy!" [Leyda’s footnote: Lockhart’s novel may even have provided a hint for one of Pierre’s greatest images, in the reference in Vol. I to “Enceladus, jaculator audax.”] Startling, too, to follow Gansevoort's thoughts on seeing the elephants at the Menagerie—forward to the elephants of Moby Dick.

Posted by Scott Norsworthy at 7:46 AM