1845 Parody of Gansevoort Melville on the Oregon Controversy 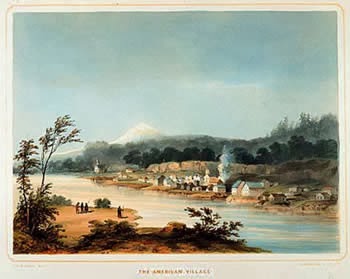 Here's a contemporary parody of Gansevoort Melville's roaring style, full of western or southwestern flourishes, adapted to one of his favorite themes. From the Illinois Weekly State Journal, November 13, 1845. Available at genealogybank.com

We cannot now say from what paper the following elegant extract was taken. It is however, from one of Mr. Melville’s speeches, delivered by that accomplished New York orator in Alabama during the Presidential canvass of 1844. If we are not mistaken, the memorandum, was handed to the original publisher, by Mr. Pickens, of South Carolina, at Mr. M’s own request.

“Whar, I say whar, is the individual who would give up the first foot, the first outside shadow of a foot of the great Oregon. There aint no such individual. Talk about treaty occupations to a country over which the great American Eagle has flown! I scorn treaty occupation; d—n treaty occupation. Who wants a parcel of low flung, ‘outside barbarians’ to go in cahoot with us, and share alike a piece of land that always was, and always will be ours? Nobody. Some people talk as though they were afeered of England. Who’s afeered?

Haven’t we lick’d her twice, and can’t we lick her again? Lick her! Yes; just as easy as a bear can slip down a fresh peeled sapling. Some skeery folks talk about the navy of England, but who cares for the navy. Others say she is mistress of the ocean. Suppose she is—ain’t we the masters of it? Can’t we cut a canal from the Mississippi to the Mammoth cave of Kentuck, turn all the water into it, and dry up the ocean in three weeks! Whar, then, would be the navy? It would be no whar. There never would have been any Atlantic ocean, if it hadn’t been for the Mississippi, nor never will be after we’ve turned the waters of that big drink into the Mammoth cave! When that’s done, you’ll see all their steam-ships and their sail ships they splurge so much about, lying high and dry, floundering like so many turtles left ashore at low tide. That’s the way we’ll fix e’m. Who’s affered?”