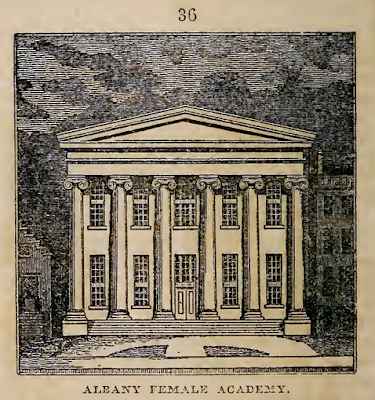 Not the whole composition but a good chunk of it survives at NYPL among other juvenile compositions by Augusta.  It's great to have this writing by Augusta and revising by Gansevoort online and available for study, fruits of John Bryant's archival research.  Check out Bryant's transcriptions using Juxta Commons and his engaging introduction at the Melville Electronic Library.  Among other things the comparison at MEL shows

Augusta in a couple of places obviously copied from encyclopedias--and scrupulously indicated her borrowings with quotation marks.

Browsing the Albany newspapers, I see that in July 1837 Augusta Melville appeared near the top of her class at the Albany Female Academy.  Augusta is named second (after Cornelia Van Rensselaer) among young ladies in the Second Department to whom the Board awarded "the highest expression of their approbation" (Albany Argus, Friday, July 21, 1837)

For more of Gansevoort's ambition, politics, and nationalism see his Jackson Jubilee speech or one of the earlier Repeal speeches: like this one or that one.  In Albany Gansevoort himself had received public recognition for his achievements at school, as early as 1831.
Posted by Scott Norsworthy at 7:45 PM