For the record, in 1850 there was a man named Doolittle in Berkshire County, Massachusetts who operated an express service from Lee to Pittsfield via Lenox. In the postscript for The Melville Log, Jay Leyda mentions an elusive "cousin Doolittle, the Lenox expressman":

Leyda seems to mean the "Mr. Doolittle" that Herman Melville called "my cousin" and implicated in the sad accident that injured one of Sarah Morewood's horses. Where Leyda got the phrase "Lenox expressman" is not clear to me, but the tag would certainly apply to George Doolittle, resident of Lee in Berkshire County, Massachusetts and owner-operator in 1850 of "Doolittle's Express."

LEE via. Lenox to Pittsfield: every day Sundays excepted, in season for the trains of cars and Express Lines. All orders and errands entrusted to my care will receive prompt attention, with moderate charges.

The reference to "cousin" Doolittle occurs in Melville's chatty letter of December 13, 1850 to Evert Duyckinck. The Melville Log partly transcribes this letter in Volume 1 on page 401 but omits the relevant passage about Doolittle and Mrs. Morewood's horses. As Melville relates, this "Mr. Doolittle" was on the railroad track in his sleigh and just missed colliding with an oncoming train. The train hit three horses belonging to Melville's then absent neighbor, Sarah Morewood. One of the three eventually died after suffering a broken leg in the accident. Melville's letter is reprinted on pages 172-175 in the 1993 Northwestern-Newberry Edition of Melville's Correspondence, edited by Lynn Horth. The same 1850 letter is accessible online via the Internet Archive in The Letters of Herman Melville, edited by Merrell R. Davis and William H. Gilman (Yale University Press, 1960) pages 115-118. Here is an image from the original document, now accessible courtesy of the New York Public Library Digital Collections:

... one of my neighbors has really met with a bad accident in the loss of a fine young colt. That neighbor is our friend Mrs Morewood. Mr Doolittle — my cousin — was crossing the R.R. track yesterday (where it runs thro the wooded part of the farm.) in his slay — sleigh I mean — and was followed by all three of Mrs Morewood’s horses (they running at large for the sake of the air & exercise). Well: just as Doolittle got on the track with his vehicle, along comes the Locomotive — whereupon Doolittle whips up like mad & steers clear; but the frightened horses following him, they scamper off full before the engine, which hitting them right & left, tumbles one into a ditch, pitches another into a snow-bank, & chases the luckless third so hard as to come into direct contact with him, & break his leg clean into two peices. — With his leg “in splints” that is done up by the surgeon, the poor colt now lies in his straw, & the prayers of all good Christians are earnestly solicited in his behalf. Certainly, considering the bounding spirit and full- blooded life in that colt— how it might for many a summer have sported in pastures of red clover & gone cantering merrily along the "Gulf Road” with a sprightly Mrs Morewood on his back, patting his neck & lovingly talking to him — considering all this, I say, I really think that a broken leg for him is not one jot less bad than it would be for me — tho’ I grant you, even as it is with him, he has one more leg than I have now.

Davis and Gilman were unable to identify Doolittle beyond the surname:

In what way Mr. Doolittle of the following story was Melville's cousin remains a mystery, upon which neither genealogies, local histories, nor family reminiscences have yet thrown any light.

The Northwestern-Newberry Edition of Melville's Correspondence credits Hershel Parker with the identification of "Doolittle" as Robert Melvill. This explanation of "Doolittle" as a joking code-name for Herman's "hapless cousin" Robert previously appeared in Parker's article,"Moby-Dick and Domesticity," in Critical Essays on Herman Melville's Moby-Dick, ed. Brian Higgins and Hershel Parker (New York: G.K. Hall and Co., 1992) pages 545-562 at page 552. So identified in both volumes of Herman Melville: A Biography Volume 1, 1819-1851 page 798; and Volume 2, 1851-1891 page 626.

It would be good to learn the exact source of Jay Leyda's information about a "Lenox expressman" linked to "cousin Doolittle." Was it one of the 1850 ads in the Pittsfield Culturist and Gazette, shown and transcribed above?

No information has turned up yet about this George Doolittle's parents. Census and other records on Ancestry.com indicate that George Doolittle (1808-1894) lived most of his life in Berkshire County, Massachusetts. He was born in 1808 in Hancock; and died in Lee at the age of 86.

George but not Electra Doolittle lived to enjoy the birth of Rolfe, their second grandson, on June 2, 1876. The next day, G. P. Putnam's Sons published Herman Melville's epic religious poem, Clarel: A Poem and Pilgrimage in the Holy Land. In Clarel, coincidentally, the most Melville-like pilgrim of all was named Rolfe.

Like his grandfather George, Rolfe Doolittle (1876-1940) found employment in Lee as an Expressman. 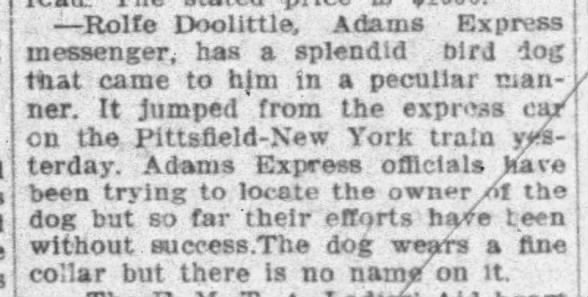 
— Rolfe Doolittle, Adams Express messenger, has a splendid bird dog that came to him in a peculiar manner. It jumped from the express car on the Pittsfield-New York train yesterday. Adams Express officials have been trying to locate the owner of the dog but so far their efforts have been without success. The dog wears a fine collar but there is no name on it.  --The Berkshire Eagle, February 11, 1909.

Posted by Scott Norsworthy at 6:05 PM