This is about the name of Sarah Morewood's "fine young colt" who broke one of his legs on the railroad track, after colliding with a train. As Herman Melville reported to Evert Duyckinck on December 13, 1850, the injured limb of the "luckless" horse was broken "clean into two peices" and had to be professionally treated, "done up by the surgeon." Herman's sister Augusta Melville later gave the name of the horse along with the sad news of his death. Transcribed as "Black Quake" on page 172 in the 1993 Northwestern-Newberry Edition of Herman Melville's Correspondence, edited by Lynn Horth; and Hershel Parker, Herman Melville: A Biography, Volume 1, 1819-1851 (Johns Hopkins University Press, 1996) at pages 800 and 809. In Melville in Love (HarperCollins, 2016) Michael Shelden pictures Black Quake as "a rambunctious horse with a name that suggested the thudding force of its galloping speed."

Below is a detail from the letter of December 21, 1850 that Augusta wrote to Helen, now digitized and accessible online courtesy of The New York Public Library Digital Collections. Does other evidence exist for the name Black Quake? Here it looks to me like Black Snake. And farriers (that is, more than one horse doctor) not farmers.

"Poor Black Snake is dead. -- All the farriers could not save him. What will Mrs Morewood say."

The second letter seems formed like the "n" in "not." The first letter looks close enough to Augusta's uppercase letter "S" elsewhere, for example in "Says Sophia"

Was another horse (anywhere) ever named Black Quake? Horses named Black Snake may be found with circus animals, celebrated running horses, and registered Morgans. Barnum's Menagerie and Circus had a "black horse" named "Black Snake," one of a hundred and twenty horses sold at auction in 1854. 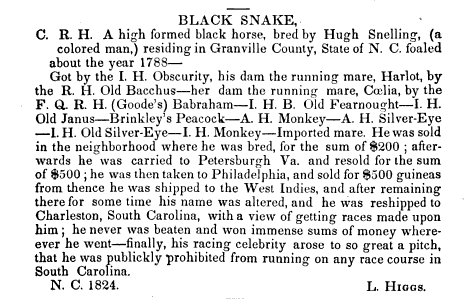 Got by the I. H. Obscurity, his dam the running mare Harlot, by the R. H. Old Bacchus —

"Black Snake" and son "Van Antwerp's Black Snake" are listed in The Morgan Horse and Register with Descendants of Sherman Morgan.

Posted by Scott Norsworthy at 10:18 AM