Allan Melville gets Gansevoort's ticket to the ball 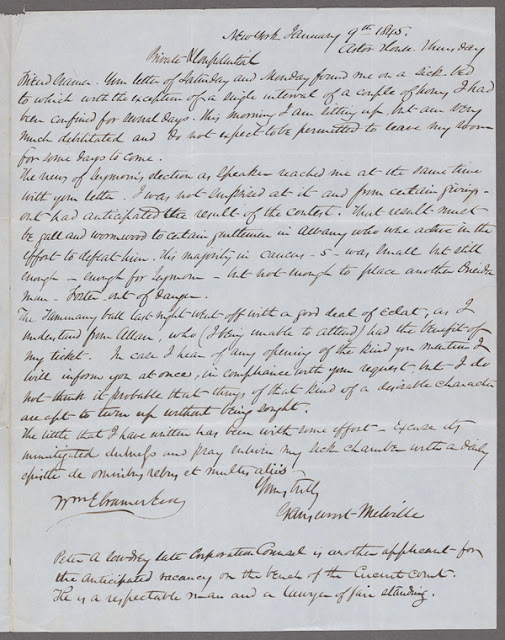 This is one of the letters from Gansevoort Melville to William Edward Cramer in the Augusta Melville papers, now accessible online courtesy of The New York Public Library Digital Collections. I like Gansevoort's expressions "gall and wormwood" and "unmitigated dulness"; and the latinity at the end. Dated January 9, 1845 when Herman Melville (not mentioned here) was also in New York City. Seymour is Horatio Seymour. Foster is Henry Allen Foster.

Friend Cramer. Your letter of Saturday and Monday found me on a sick bed to which with the exception of a single interval of a couple of hours I had been confined for several days. This morning I am sitting up, but am very much debilitated and do not expect to be permitted to leave my room for some days to come. The news of Seymour's election as Speaker reached me at the same time with your letter. I was not surprised at it and from certain givings-out had anticipated the result of the contest. That result must be gall and wormwood to certain gentlemen in Albany who were active in the effort to defeat him. The majority in caucus - 5 - was small but still enough --enough for Seymour-- but not enough to place another Oneida man --Foster-- out of danger.

The Tammany ball last night went off with a good deal of eclat, as I understand from Allan, who (I being unable to attend) had the benefit of my ticket. In case I hear of any opening of the kind you mention I will inform you at once, in compliance with your request--but I do not think it probable that things of that kind of a desirable character are apt to turn up without being sought.

The little that I have written has been with some effort--excuse its unmitigated dulness and pray enliven my sick chamber with a daily epistle de omnibus rebus et multis aliis.

Peter A. Cowdrey late Corporation Counsel is another applicant for the anticipated vacancy on the bench of the Circuit Court. He is a respectable man and a lawyer of fair standing.

Posted by Scott Norsworthy at 8:02 AM