Parke Godwin on Melville and Typee

Two 1915 columns by Elisha Jay Edwards record interesting reminiscences about Herman Melville by Parke Godwin. According to Edwards in the first article below, Godwin at 80 (so, on or after February 28, 1896) thought Melville, along with Richard Henry Dana and Francis Parkman, excelled at writing factual narratives of personal experience. In the second article, "When the Government Encouraged Authorship," Parke Godwin says that he talked with Melville beforehand about his plans to make a book of his Marquesan adventures. Melville was "doubtful" but Godwin, as quoted by Edwards, assured him of its certain popularity.

"When he [Herman Melville] returned to New York I [Parke Godwin] met him, and he told me that he was going to narrate these experiences, although he was somewhat doubtful about finding a publisher for the book. I was satisfied that he would find no difficulty in obtaining readers and in that judgment I was correct. He called his book 'Typee,' and it was published in the same year that Parkman started out upon his adventures across the continent, which he described in a very successful book, now a classic, which he called 'The Oregon Trail.'" --E. J. Edwards, When the Government Encouraged Authorship in the Raleigh, North Carolina News and Observer, August 28, 1915. 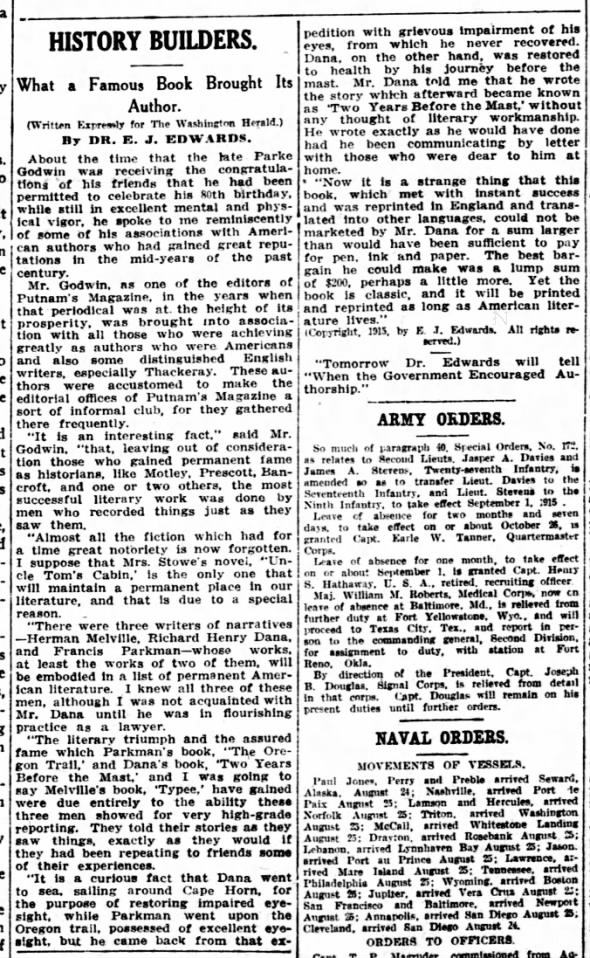 
... Mr. Godwin, as one of the editors of Putnam's Magazine, in the years when that periodical was at the height of its prosperity, was brought into association with all those who were achieving greatly as authors who were Americans and also some distinguished English writers, especially Thackeray. These authors were accustomed to make the editorial offices of Putnam's Magazine a sort of informal club, for they gathered there frequently.

"It is an interesting fact," said Mr. Godwin, "that, leaving out of consideration those who gained permanent fame as historians, like Motley, Prescott, Bancroft, and one or two others, the most successful literary work was done by men who recorded things just as they saw them.

"Almost all the fiction which had for a time great notoriety is now forgotten. I suppose that Mrs. Stowe's novel, "Uncle Tom's Cabin,' is the only one that will maintain a permanent place in our literature, and that is due to a special reason.

"There were three writers of narratives--Herman Melville, Richard Henry Dana, and Francis Parkman--whose works, at least the works of two of them, will be embodied in a list of permanent American literature. I knew all three of these men, although I was not acquainted with Mr. Dana until he was in flourishing practice as a lawyer.

"The literary triumph and the assured fame which Parkman's book, "The Oregon Trail,' and Dana's book, 'Two Years Before the Mast,' and I was going to say Melville's book, 'Typee,' have gained were due entirely to the ability these three men showed for very high-grade reporting. They told their stories as they saw things, exactly as they would if they had been repeating to friends some of their experiences...." --E. J. Edwards, "History Builders / What a Famous Book Brought its Author" in the Washington, D. C. Herald, August 27, 1915.

WHEN THE GOVERNMENT ENCOURAGED AUTHORSHIP.

"One of the most interesting and personally charming of all of the American writers whom it was my good fortune to meet was Herman Melville," said the late Parke Godwin to me, at a time when he was speaking to me reminiscently of some of the great writers with whom he was associated as editor of Putnam's Magazine. Mr. Godwin had said to me that he looked upon Richard Henry Dana's narrative entitled "Two Years Before the Mast" and Francis Parkman's story of his adventures in the Far West, which was called "The Oregon Trail," as two works which were sure of permanent fame. They had already become American classics. Mr. Godwin was an admirable critic, and he ascribed the phenomenal success of these two books to the fact that the writers of them told a story of adventure in simple, yet vigorous language, reporting the things that they saw exactly as they saw them, so that the readers of the books could thereby form a perfect mental picture of these scenes. Furthermore, Mr. Godwin said incidentally that the American writers of later years should study these works, for in them they would find the secret of that permanent success, which is called fame.

"I include Herman Melville in the list of great American writers," said Mr. Godwin. "Like Richard Henry Dana, he sailed around Cape Horn on a whaling vessel, expecting to be gone two years. He was marooned upon an island in the Pacific, which was occupied by the Typees, a tribe of warlike Indians. He had plenty of experiences; some of them far more exciting and dangerous than any which Mr. Dana describes in his book. When he returned to New York I met him, and he told me that he was going to narrate these experiences, although he was somewhat doubtful about finding a publisher for the book. I was satisfied that he would find no difficulty in obtaining readers and in that judgment I was correct. He called his book 'Typee,' and it was published in the same year that Parkman started out upon his adventures across the continent, which he described in a very successful book, now a classic, which he called 'The Oregon Trail.'

"For a long time Melville's book maintained an even greater success than did Dana's 'Two Years Before the Mast.' It was successful for the same reason that Parkman and Dana gained great successes with their books. It told an exciting story of adventure with all the picturesque details that the experience made possible in appropriate language.

"I have heard that in recent years it has not maintained its popularity as compared with Dana's and Parkman's books, but I am certain that this is only a momentary lapse. The book is sure to become a great American classic.

"By the way, Melville was one of the great American writers whom the United States government fostered indirectly, for a place was given to him in the New York custom house. There, too, many of the men gained fame as writers secured a regular income, and it was not until recent years that the government abandoned its general policy whereby writers were assured of regular and permanent income. I suppose we should never have had the masterly essays of Richard Grant White and the evidence of his Shakespearian scholarship had not the government provided him with a comfortable position in the custom house." --E. J. Edwards, When the Government Encouraged Authorship in the Raleigh, North Carolina News and Observer, August 28, 1915; accessible via Newspapers.com and GenealogyBank.

In a letter to the editor of The People's Journal dated July 17, 1847 Parke Godwin confirmed "the real existence of Mr. Herman Melville" for skeptical Brits:


"... let me say that I saw him in Albany the other day as large as life, where he and his family are well known, and his narratives bearing a little artistic ornament, are held to be perfectly authentic. The writer under no assumed name, but under his own veritable Christian and patronymic designation. It is no unusual thing, by the way, for our young men of fortune to go as sailors, to the South Seas, in quest of adventure."  --The People's Journal v. 4 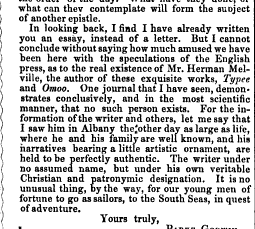 Posted by Scott Norsworthy at 12:31 PM