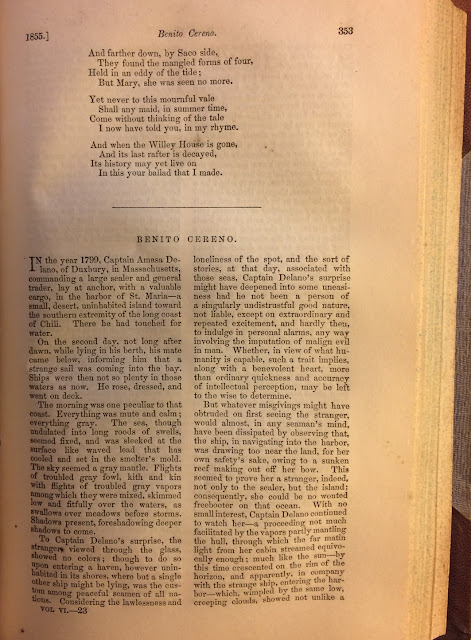 In Benito Cereno (1855) Melville introduced the words "pretty" and "truly"when transforming the narrative prose of his source into dialogue. Where Amasa Delano had called assault with a knife "rather serious sport" (not the child's play represented by Benito Cereno), Melville made his Delano say, "Pretty serious sport, truly."

"I told him it appeared to me to be rather serious sport, as the wound had caused the boy to lose about a quart of blood."

Look at what Melville keeps, and what else he adds in the rewrite:


I saw this and inquired what it meant.


In amazement, Captain Delano inquired what this meant.


that it was merely the sport of the boys


that it was merely the sport of the lad

Added by Melville to his source, just in this short bit: Delano's "amazement"; calling the Spanish captain by his first name, "Benito"; Benito's "pale" appearance and defeated manner of speaking when he "dully muttered" his reply; and the substitution of "lad" where Delano reported "boys."

So what? is the next question. In answering or say pre-answering, I don't automatically have to knock the work of Amasa Delano. Even the best old-school source studies have on occasion devalued source texts for no good reason, beyond perhaps a perceived need to absolve Melville from the sin of plagiarism. Writing on Melville the Poet, page 130 in The New Cambridge Companion to Herman Melville, edited by Robert S. Levine (Cambridge UP, 2014), Elizabeth Renker urges "a new approach" which at its best might helpfully check groundless discounting.

For a humble start, let's try this. So what? So the changes Melville made here in this small portion of his rewrite of Amasa Delano reveal, on closer scrutiny, not only certain mechanics of his plagiarism creative borrowing, but also certain creative aims. Melville's changes achieve interesting and possibly, arguably, characteristic results. Some notable effects of Melville's retouching here are
Old-school or new, source study is more fun than ever, now that we have Melville's writings and many of his sources Google-digitized and conveniently accessible via institutional research libraries and amazing places like these:
Even with splendid digital resources and Melville's writings swelling the PUBLIC DOMAIN, it's a great blessing for scholars to have a haven in print--meaning in this case the 1987 Northwestern-Newberry Edition of Melville's Piazza Tales and Other Prose Pieces, 1839-1860. Amasa Delano's Chapter 18 is there for ballast in the back, reproduced with handy marginal cross-references to the main text of "Benito Cereno."

Posted by Scott Norsworthy at 12:06 PM