In 1824 Harriet Butler and Sarah Sackitt (Sackett) both signed a petition from the "Ladies of Troy" requesting the Marquis de Lafayette to honor the Troy Female Seminary with a visit during his triumphal U. S. tour. 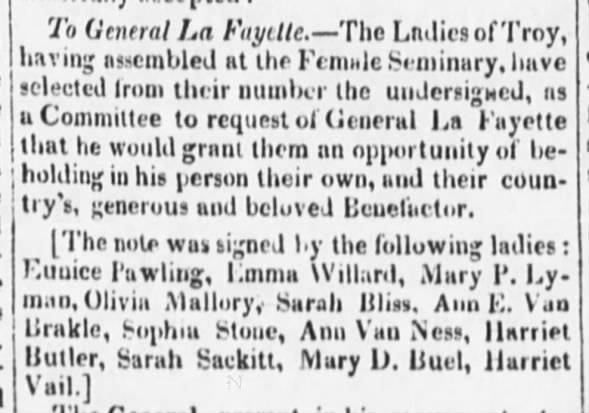 Thu, Sep 23, 1824 – Page 1 · The Evening Post (New York, New York, New York) · Newspapers.com
This "Sarah Sackitt" is probably Sarah Sackett, the former Sarah H. Pardee and wife of Troy merchant Daniel Sackett (1788-1845). At the time Sarah Sackett belonged to the First Presbyterian Church of Troy; she would join the Second Presbyterian Church in 1827 as a charter member. Harriet Butler is the daughter of the Rev. David Butler, Rector of St. Paul's Episcopal Church. In later sources, both women are named independently in connection with the first publication of "A Visit from St. Nicholas" in the Troy Sentinel on December 23, 1823. Harriet Butler copied the poem while visiting the family of Clement C. Moore in New York City, as reported by John T. Parker in the Troy Daily Times on December 23, 1871 ("The 'Visit of St. Nicholas’—Moore's Poem—Some Account of Its History."). Mrs. Sackett brought a copy to editor Orville L. Holley, according to the 1844 letter from publisher Norman Tuttle to Moore, now held by the Museum of the City of New York (54.331.17b).

The reported involvement of these two ladies of Troy as intermediaries is consistent with the 1862 account of the poem's earliest transmission in which T. W. C. Moore describes two stages of copying, first "by a relative of Dr Moores in her Album" and second, "by a friend of hers, from Troy." But until now (so far as I know), Harriet Butler and Sarah Sackett were not linked by name in any known contemporary record. This item nicely confirms their acquaintance and active collaboration with other civic-minded women on a project of mutual interest. Great to have, especially since some published versions of Lafayette's visit to Troy omit the bracketed list of signatories included in the New York Evening Post account.

The most famous name on the 1824 list is that of Emma Willard, founder of the Troy Female Seminary.


The town, he said, seemed to have sprung up by enchantment. And how must this astonishment have increased when he visited this Female University, and beheld so great a collection of young ladies, drinking from the pure fountain of knowledge, whose bright eyes, and healthy countenances, and cheerful demeanor, bespoke them "as sweet as innocent; as innocent as gay; as gay as happy." The visit of the General, to Troy, short as it was, afforded him great satisfaction. He talked much about it, and frequently spoke of his visit to the Seminary, as one of the most interesting and delightful moments of his life.  --New York Evening Post, September 23, 1824. Reprinted in Poulson's American Daily Advertiser (Philadelphia, PA) on September 23, 1824; the New York Spectator on September 24, 1824; and the Richmond Enquirer ("Domestic. Journey of the Nation's Guest--in Continuation. Reception at Albany") on October 1, 1824.

Lafayette lingered so long in Troy that he had to cancel scheduled stops in Lansingburgh and Waterford.