In Who Wrote "The Night Before Christmas"? (page 184, footnote 5) MacDonald P. Jackson backs up his sympathetic treatment of Livingston lore in chapter 20 by quoting Mary Van Deusen on the family tie between Henry Livingston, Jr. and his first cousin Judith Livingston, wife of John Moore.


"Having a connection of both families traveling south to act as a governess in a Moore-connected household isn't that absurd. Henry Livingston's first cousin and next door neighbor was Judith Livingston, who was married to John Moore, the brother of Clement Moore's uncle. In 1815, their daughter Lydia was married to a student of Moore's, Rev. William Henry Hart, and the couple moved to Virginia."

On a "Timeline" of authorship findings, Ms. Van Deusen has placed her discovery of the connection to the Moore family in the year 2001
and elsewhere explains:

"I knew that Henry's first cousin, Judith Livingston, lived near Henry and was married to John Moore. I just had no idea who John Moore was."

No idea who John Moore was? Melvilliana can help with that: father of T. W. C. Moore (1794-1872), as previously disclosed in the Key witness letter post:
Here I'm repeating the main point of that earlier and rather roundabout post. Besides being the parents of Lydia (mother of Frances Livingston Hart Butler), John Moore and Judith (Livingston) Moore were also parents of Thomas William Channing Moore: the same T. W. C. Moore who personally interviewed Clement C. Moore in 1862 and got the retired seminary professor and poet, age 82, to write out "The Night Before Christmas" one more time for The New-York Historical Society and posterity.

T. W. C. Moore was a first cousin, once removed of Henry Livingston Jr., since Henry and TWC's mother Judith were first cousins (their fathers Henry Sr. and James were brothers). Livingston cousin T. W. C. Moore maintained close ties with his nieces including Lydia's daughter Frances, who married Rev. Butler's son Clement Moore Butler. (Frances's sister-in-law was Troy resident Harriet Butler, named in later reports as copyist of "A Visit from St Nicholas.") In his 1858 will, T. W. C. Moore thoughtfully and generously remembered many nephews and nieces including four "daughters of my late sister Lydia" whom he appointed as "residuary Legatees." To Frances he gave two thousand dollars and 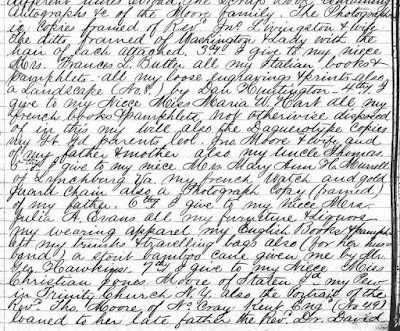 The will reveals also that T. W. C. Moore owned a copy by Daniel Huntington of his mother Judith's 1812 portrait, which he gave to another niece, Elizabeth Elliot Hart Coleman. The original portrait of Judith Livingston Moore was then in the possession of TWC's younger brother Francis Childs Moore, aka F. C. Moore.

As a serious art collector and "genuine antiquarian" (so described in Martha J. Lamb's History of the City of New York), Thomas W. C. Moore made it his business to learn about the provenance of valuable artifacts and to pass along relevant information to archivists. Gifts from T. W. C. Moore to family members, libraries, and museums were typically accompanied by manuscript notes in which he had carefully recorded relevant facts for the historical record. 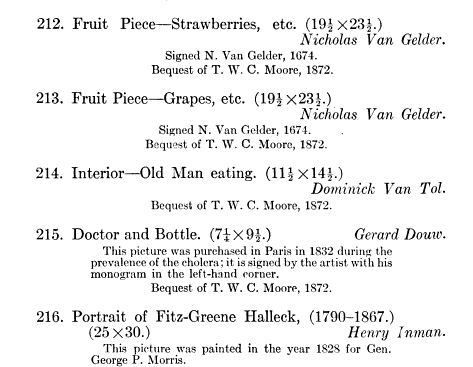 He made a project of accurately identifying himself and other New Yorkers portrayed in John Searle's painting New York, the interior of the Park Theatre, 1822. 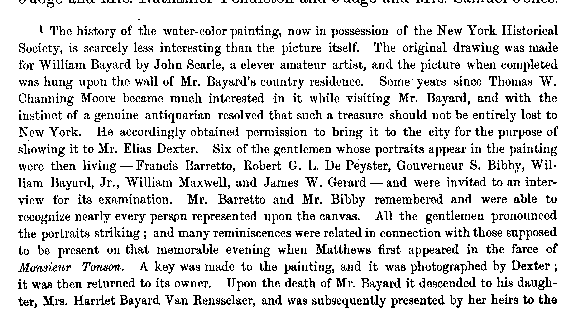 To support another effort of archival preservation, TWC Moore told what he knew about the authorship of "The Night Before Christmas" in his 1862 cover letter to the Librarian of the New-York Historical Society, forwarded with Clement C. Moore's holograph copy. The manuscript Christmas poem and TWC's letter are both extant in the collections of The New-York Historical Society.
Considering T. W. C. Moore's demonstrably close relationship with his niece Frances Livingston Hart Butler, it seems reasonable to suppose that he knew Frances's unmarried sister-in-law Harriet Butler and learned either directly from Harriet or indirectly from Frances exactly how Clement C. Moore's "A Visit from St. Nicholas" got from Moore's home in Chelsea to Troy. Writing in 1862, Frances's uncle T. W. C. Moore gave credit for copying the poem to two women, without identifying either by name. Later reports name Harriet Butler as one of the original copyists, possibly reflecting unrecoverable oral testimony. The other may have been Sarah Sackett, named by Norman Tuttle, publisher of the Troy Sentinel, as the person who gave a copy of "Visit' in 1823 to editor Orville L. Holley. In 1862, T. W. C. Moore communicated his personal knowledge of the poem's transmission--gained independently of the author, most likely through the family connection he loyally maintained with his niece Frances. For information about the poem's original composition, T. W. C. Moore talked directly with the author.

English majors have no excuse, but some partisans in the Livingston camp will always believe that Henry Livingston, Jr. composed "The Night Before Christmas." For Livingston descendants who might want a more historically grounded holiday hero, I give you "Old Cousin Tom," Thomas William Channing Moore.


"Old Cousin Tom," we were wont to call him. What a stream of memories, sweet childish memories, his name evokes! Can we forget him who never forgot his juvenile kindred, but made glad their hearts, not once but always, when his travels brought him to old Virginia. His portrait appears in the picture of the interior of the Park Theatre in the History of New York City, in the library of the Penn. Hist. Society. He spent much time in genealogical research and was a steadfast friend of Fitz-Greene HALLECK. Peace to his ashes! --David Moore Hall, Six centuries of the Moores of Fawley, Berkshire, England and their descendants amid the titled and untitled aristocracy of Great Britain and America (Richmond, Virginia, 1904) via RootsWeb

Your Cousin Tom not only coaxed one more holograph copy of "The Night Before Christmas" from its author Clement C. Moore, he also solved the longstanding mystery of its transmission. Cousin Tom bequeathed to all of us the inside story of how "The Night Before Christmas" found its way to the Troy Sentinel, sharing details personally known to him through close ties to the family of his beloved niece Frances Livingston Hart Butler. Thus, no need for the "Livingston Governess" theory of transmission, whereby a hypothetical governess supposedly brought a hypothetical manuscript copy of "A Visit from St. Nicholas" from Poughkeepsie to Richmond. Cousin Tom himself made frequent trips south to visit kinfolk in Old Virginia. With intimate connections to Poughkeepsie (where his cousin Cornelia Billings had married Randall S. Street, a close friend of Henry Livingston, Jr; their son William I. Street formally witnessed T. W. C. Moore's 1858 will) and Manhattan, Cousin Tom could have told his adoring Richmond relatives all about "The Night Before Christmas" and who wrote it.

Here again is the earliest known Livingston witness letter, decisively affirming Clement C. Moore's authorship of "A Visit from St. Nicholas" aka "The Night Before Christmas." Addressed to the Librarian of the Historical Society, the letter from T. W. C. Moore was first published in The New York Historical Society Quarterly Bulletin 2.4 (January 1919) pages 111-115. 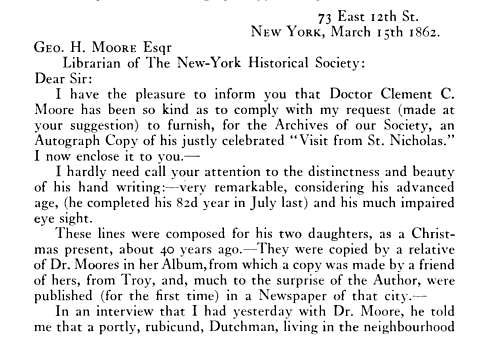 Dear Sir:
I have the pleasure to inform you that Doctor Clement C. Moore has been so kind as to comply with my request (made at your suggestion) to furnish, for the Archives of our Society, an Autograph Copy of his justly celebrated "Visit from St. Nicholas." I now enclose it to you.—

I hardly need call your attention to the distinctness and beauty of his hand writing:—very remarkable, considering his advanced age, (he completed his 82d year in July last) and his much impaired eye sight.

These lines were composed for his two daughters, as a Christmas present, about 40 years ago.—They were copied by a relative of Dr. Moores in her Album, from which a copy was made by a friend of hers, from Troy, and, much to the surprise of the Author, were published (for the first time) in a Newspaper of that city.—

In an interview that I had yesterday with Dr. Moore, he told me that a portly, rubicund, Dutchman, living in the neighbourhood of his fathers country seat, Chelsea, suggested to him the idea of making St. Nicholas the hero of this "Christmas piece" for his children.

Listed in WorldCat from the library catalog of the New-York Historical Society as A Visit from St. Nicholas: Holograph; currently held in Mss Collection, BV Moore, Clement, Non-circulating.


Holograph manuscript, dated March 13, 1862, of Clement C. Moore's "A visit from St. Nicholas," originally composed ca. 1822 and written out by the author on this occasion at the suggestion of librarian George H. Moore of the New-York Historical who wished to add a holograph copy of the poem to the Society's library collection. The three page manuscript is accompanied by a cover letter addressed to George Moore by Thomas W. C. Moore presenting the enclosed manuscript and briefly discussing the circumstances of the poem's original composition forty years earlier. --New-York Historical Society, catalog summary via BobCat

Posted by Scott Norsworthy at 10:36 AM