And now, loud above the roar of the sea, was suddenly heard a sharp, splintering sound, as of a Norway woodman felling a pine in the forest. It was brave Jarl, who foremost of all had snatched from its rack against the mainmast, the ax, always there kept.  --Mardi: And a Voyage Thither

In Mardi (1849) Melville's figurative Norway woodman cuts down a tree, successfully, whereas Shelley's Norway woodman stamps out a spark but fails to prevent the forest fire of revolt that it kindles in Lines Written among the Euganean Hills: 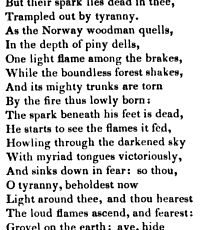 As the Norway woodman quells,
In the depth of piny dells,
One light flame among the brakes,
While the boundless forest shakes,
And its mighty trunks are torn
By the fire thus lowly born:
The spark beneath his feet is dead,
He starts to see the flames it fed
Howling through the darken'd sky
With myriad tongues victoriously,
And sinks down in fear: so thou,
O Tyranny, beholdest now
Light around thee, and thou hearest
The loud flames ascend, and fearest:
Grovel on the earth; ay, hide
In the dust thy purple pride!

Generally speaking, a Norway woodman has no very obvious business in the South Pacific or the hills south of Padua. In Mardi, however, Melville's simile is well adapted to Jarl, the narrator's Scandinavian companion, and Jarl's heroic action with the axe (in a gale, he chops at the rigging to bring down the mainmast of the Parki). Jarl as Norway woodman in Mardi inescapably evokes Shelley's Norway woodman--whom Melville might have first encountered the library of the Albany Young Men's Association, in Hazlitt's Select British Poets (London, 1824).

Posted by Scott Norsworthy at 5:09 PM